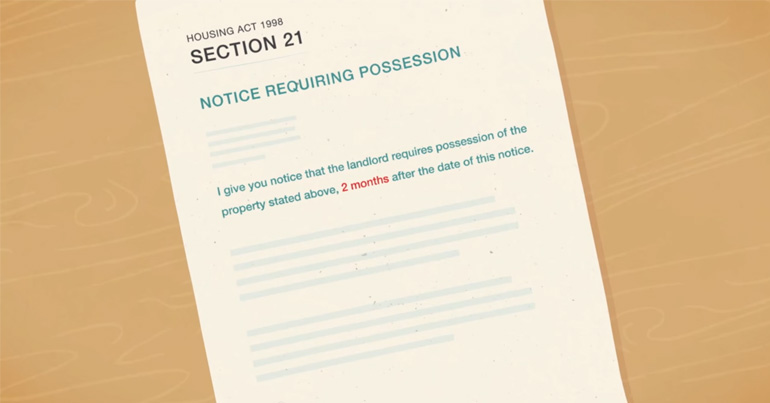 The government will ban section 21 notices, which give landlords the right to ‘no-fault evictions’. Housing campaigners have called it a “HUGE victory for private renters”. But new plans proposed by the government are wide-open to landlord exploitation.

The government announced on 15 April that it will abolish section 21, which allows landlords to evict “at short notice and without good reason”. If served, the notice gives as little as eight weeks to move out and means tenants “cannot defend against” it. New proposals by the government mean landlords will have to provide a “concrete, evidenced reason already specified in law” to evict tenants.

The Housing Act 1988 introduced section 21. Hackney tenant union Digs, which later merged into London Renters Union, carried out early attempts to challenge it. Then, in 2018, a coalition of housing campaigners and tenant groups launched the End Unfair Evictions campaign to abolish the law. These included Generation Rent, ACORN, London Renters Union and the New Economics Foundation. And they celebrated the government’s latest announcement.

Generation Rent’s public and policy affairs manager Hannah Slater said it was a “HUGE victory”. ACORN called it a “huge victory over the Tories”. And London Renters Union described it as an “important victory” that showed “organised renters are a force to be reckoned with”. It also pointed to the impact grassroots campaigning had in forcing the government’s hand on this subject.

On the other hand, the Residential Landlords Association said the ban would increase risk for landlords. As a result, it claimed, the supply of rental properties is under threat. And the National Landlords Association (NLA) said the move would lead to “chaos in the courts”. It explained that landlords rely on section 21 because section 8, the alternative route for eviction, is “slow, costly and inefficient”.

Currently, landlords can evict using section 8 if a tenant has broken the rental agreement. This includes rent arrears, damage to the property, or if the tenant is involved with criminal behaviour. However, tenants can also challenge section 8 notices in court.

In its announcement on banning section 21, the government also said it would “amend the Section 8 eviction process”. Lawful reasons for eviction will be expanded to include the landlord selling the house or moving back into it. It also said that the court process for section 8 will be sped up. But this attempt to ‘balance’ the abolition of section 21 has raised serious concern.

Paul Nicolson of housing policy group Taxpayers Against Poverty, for example, said that it’s difficult for a tenant to win in court against a section 8 notice. He said fighting the notice requires a “housing lawyer… or be allowed legal aid”. Neither of these are readily available. As a result, Nicolson said, “the balance of power is still with the landlords evicting”. And housing journalist Vicky Spratt asked in iNews:

How will they make sure [section 8] doesn’t become a loophole? Who will enforce it? After all, revenge evictions have been illegal since 2015 yet in the last week alone, I’ve spoken to four people who’ve fallen victim to one recently.

Spratt and Labour’s shadow housing secretary John Healy also point out that an even simpler way for landlords to get around the loss of section 21 is to raise rents. The government didn’t mention rent controls in its “biggest change to the private rental sector in a generation”.

“Now it’s time to step up the struggle”

Housing campaigners, tenants unions and homelessness charities are celebrating the end of section 21. And they have good reason to.

In the five years up to 2015, for example, landlords carried out 16,440 evictions using the section 21 “accelerated procedure”. In August 2018, Generation Rent said that “216 households evicted every week in England under section 21… are becoming homeless”. It also said that these evictions are “the leading cause of statutory homelessness”.

But the government’s latest announcement stinks of spin. Campaigners are the first to note this. Amina Gichinga of London Renters Union said on Victoria Derbyshire that rent caps now need to be introduced. Meanwhile, activist Gordon Maloney wrote in Rent Strike zine:

In Scotland, since no-fault grounds were scrapped, rents have been going up faster than in the rest of the UK. Tenants here know that the fight for decent housing is far, far from over…

Now it’s time to to step up the struggle; to make bigger demands; to fight more – for rent controls, for social housing, for an end to right-to-buy, for the housing system we deserve.

The end of section 21 should be celebrated. It shows what committed activists and grassroots campaigns can achieve. But we can’t let the government use it as a spin while tenancy remains precarious for millions that choose or are forced to rent.