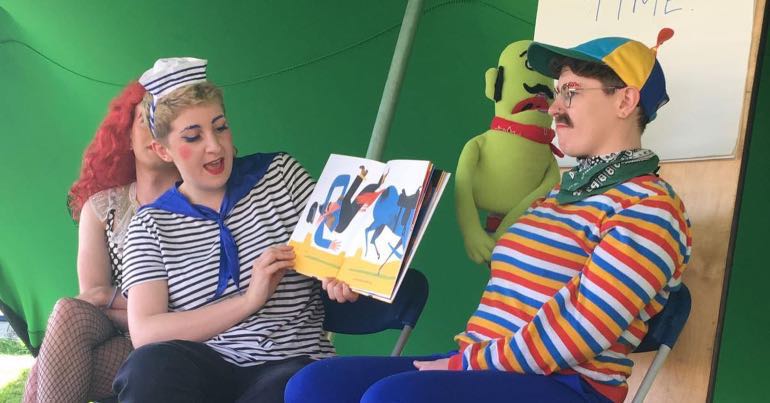 An Irish drag collective has had its upcoming story-time event for children cancelled after a homophobic backlash.

Glitter Hole was due to hold the event at Dún Laoghaire–Rathdown (DLR) library on 26 June. According to the library, it was to be the “first ever Drag Story Time event” held there. But DLR library has since cancelled the event. It said “this event will not now go ahead at this time”. Initially, it suggested this was because of concerns about “age appropriateness”, though it later said homophobic abuse was responsible.

Glitter Hole explained on Facebook that DLR library contacted them last month about putting on the show. DLR organised it as part of Pride celebrations. But the group revealed:

Over the weekend we have been inundated with extremely violent homophobia from a frighteningly large group of bigots who believe that a few drag queens reading books to children amounts to child abuse. 2/6

The library decided that the event was a safety risk, which we accepted given the scale and gravity of the vitriol that was being spewed on twitter. However, the statement issued by DLR last night cites “age appropriateness” as their reason for cancellation. 3/6

And now, according to Glitter Hole, the library has also admitted it called off the event because of:

the high level of degrading, inappropriate comments on social media about the performers and library staff.

DLR Libraries have revised their statement to admit that the event was cancelled due to the volume of targeted homophobia rather than concerns over the “age appropriateness” of our event. I’m still awaiting an apology from them for the implications of their earlier statement. https://t.co/wjR0Ks4nPL

Many people are not happy with the decision. A journalist with the Irish Examiner called on people to “Spot the difference” between drag performance and pantomime:

Others voiced their regret and “disgust” with the cancellation:

So disappointed to hear this event isn't going ahead and disgusted by the bile that has been spewed at you. Hand-wringing hypocrisy at its very worst. Really hope to catch one of your storytelling sessions with my kids at another venue soon X

I hate that this has happened, that these bullies got their way. The accounts that made insinuations should be reported nonetheless.

One person noted the dishonesty of those who got the event cancelled:

I’m sorry to hear this, I saw some tweets conflating the shows aimed at adults with the children’s shows in order to create an issue with what you’re doing. Sorry you’re receiving hateful messages xx

Another also picked up on this:

Sorry to hear this, would've brought my nephews and niece. People are happy to have drag in children's entertainment (see every panto) just so long as the drag act is the butt of the joke, a show like this where the lgbt have agency over the story and suddenly there's uproar

Someone also sarcastically pointed out the dangers of reading:

My sixteen extremely Christian children haven’t stopped trying to overthrow the state, patriarchy, capitalism, and gender normativity since @GlitterHoleDub read them The Wind In The Willows in a library

Glitter Hole also brought attention to the irony of the cancellation:

The irony is that we were booked for Pride and yet after having hate speech directed at us all weekend, DLR have responded to that by deciding that we are incapable of providing an age appropriate family event.

The attack on the group is a clear reminder of the level of hatred that exists in supposedly liberal Ireland. In spite of the legalisation of gay marriage and legalisation of abortion, the far right is making gains in the country. Anyone they consider ‘different’ is a target. In this case, Glitter Hole is that target.

It won’t be the last time that ignorance like this is on display. And if we want to create a more inclusive society, we must fight such ignorance every time it appears.