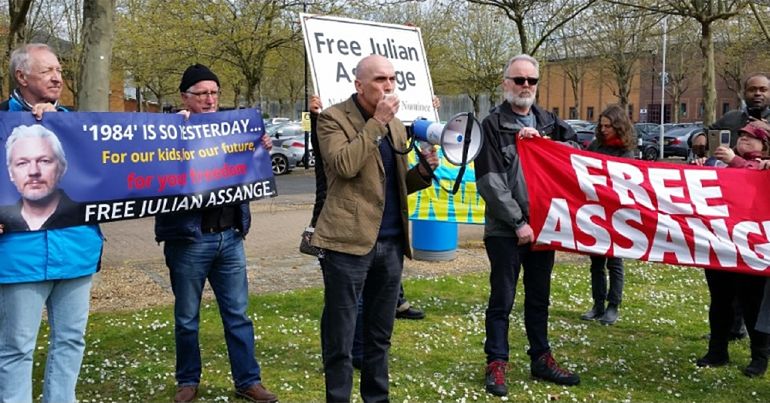 Dozens of people attended a demonstration to express solidarity with Julian Assange outside Belmarsh prison, on Sunday 14 April. The Canary attended the event, where participants expressed their outrage over the UK government’s prosecution and incarceration of Assange.

The former MP George Galloway was among the speakers:

.@georgegalloway denounced the arrest & prosecution of #JulianAssange, on 14 April at Belmarsh

Galloway called #Assange a "political prisoner" who has "many friends around the world. Rather more… than the war criminals that he exposed which led him here to Belmarsh prison”. pic.twitter.com/aDJIRVrDkn

One demonstrator, Cheryl, told The Canary that Assange is an “international and historical icon who has done nothing wrong but tell the truth”.

The world’s ‘most important journalist’

Chris Williamson MP told The Canary that he thinks many of his fellow MPs “lost sight of the bigger picture” regarding Assange. He said he came to:

show solidarity with Julian Assange who, in my opinion, is the most important journalist anywhere in the world at this moment in time.

Outside Belmarsh prison 14 April during solidarity demo with for #JulianAssange.

I asked @DerbyChrisW why other MPs weren't also present. He said he wasn't sure but that he came to show his solidarity with who he felt was "the most important journalist at this moment in time". pic.twitter.com/K2qPtVdbvt

Dozens of people gathered to show support for an event that organisers promoted on Friday afternoon, according to Gracias. Although Kauser lamented the lack of “social media famous socialists” to The Canary, who she said, “need to get their asses offline and their bodies out”. Sunday’s event followed a demo the day before organised by members of the JADC and supported by the World Socialist Web Site and the Socialist Equality Party.

On 13 April, The Canary spoke to Cerie Bullivant, a spokesperson for human rights group CAGE, who was held for seven months in Belmarsh prison.

Bullivant, who was at Belmarsh in 2007 before being “completely exonerated”, told The Canary:

Belmarsh, like much of our prison system, is built on dehumanising those detained. My time there involved being constantly moved cells, intrusive demeaning strip searches, sometimes multiple times in just a few hours. Due to government cuts, extreme violence is a normal occurrence. That a journalist has been put into this situation says a lot about our country at the moment.

Belmarsh is on average at 110% capacity and operates as a Category A “high security” prison. Assange has been convicted of “breaching his bail”. The Met Police “further arrested” him on behalf of the US:

UPDATE: Julian Assange has been further arrested in relation to an extradition warrant on behalf of the United States authorities. He remains in custody at a central London police station. https://t.co/rK3mtlsPBE pic.twitter.com/kipiWbflOh

The Committee to Protect Journalists said it was “deeply concerned” about the arrest of Assange. But others went much further:

The continued imprisonment of @xychelsea is an utter disgrace. The arrest of Julian Assange represents an extremely dangerous crossing of the rubicon. This is an assault on journalism and a free press. All journalists should stand in fierce opposition.

The action of the British police in literally dragging Julian Assange from the Ecuadorean embassy and the smashing of international law by the Ecuadorean regime in permitting this barbarity are crimes against the most basic natural justice. This is a warning to all journalists.

Trump's war on the free press–his "Enemy of the People"–escalated to a new and dangerous height yesterday, unveiling the first indictment in our history of a publisher: for the crime of committing unauthorized journalism. https://t.co/kXl6RLQpw3

The demonstration on Sunday made clear that there remains a broad coalition of people committed to Assange and the principles of speaking truth to power that he represents.