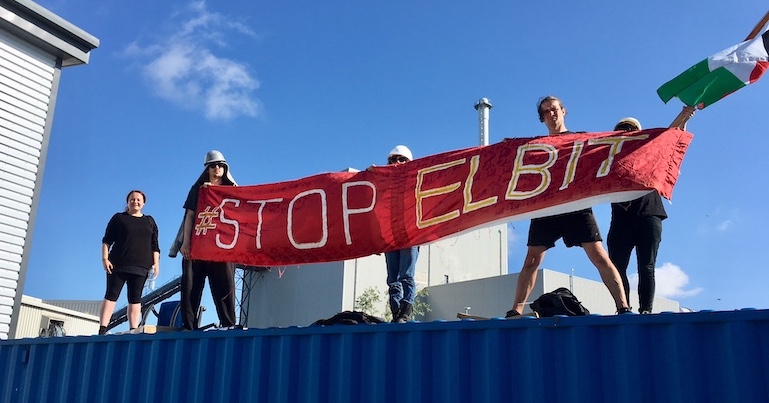 On 1 July, activists closed down two Israeli-owned arms factories in the UK. The protesters took this action “in solidarity with the Palestinian people“.

In the early hours, activists occupied the roof of arms manufacturer Elbit’s Ferranti factory in Oldham, Greater Manchester and locked the gates. They also dropped banners from the roof. One of these read:

A group of UK activists have occupied the rooftop of Israeli Arms Factory, Elbit-Ferranti, in the centre of #Oldham #StopArmingIsrael pic.twitter.com/GkclmMfeoR

Meanwhile, in Sandwich, Kent, protesters blockaded gates to Elbit’s purpose-built Instro Precision factory. They also spray-painted messages on the windows and a door:

NOW: activists in Manchester & Kent have closed down 2 Israeli-owned arms factories in the UK.

RESULT!!
After 3 hours of being occupied Instro Precision have sent workers home & closed for the day!
Activists still on site.
Police now arriving in force. pic.twitter.com/0RzbwNSDps

As one of the activists explained:

Elbit is directly involved in the murder of Palestinians by the occupying Israeli forces. They work closely with the Israeli military to develop increasingly lethal weapons, which are then tested on Palestinians and sold as ‘battle-tested’ to governments around the world, including the British government. It is deplorable that they have four factories in the UK where they… manufacture their deadly weapons with impunity.

As Corporate Watch noted, Elbit Systems is “Israel’s largest privately-owned arms and ‘security’ company”. Elbit advertises its products as “mature and battle-proven”. The multi-billion-dollar Israeli company reported pre-tax profits of $306.7m in the last quarter of 2018.

Elbit manufactures several types of weapons that are considered controversial under the laws of war because of their inability to distinguish between combatants and non-combatants – a core tenet of international humanitarian law. These include weaponized white phosphorus, cluster bombs, and flechette projectiles.

Protesters said they acted in support of the human rights of everyone subjected to brutal wars around the world. This protest was a direct response to a call from the Boycott Divestment and Sanctions (BDS) movement, which views “Elbit as a key target”. As BDS stated:

[It] is only able to act with such impunity because governments, companies and research centers cooperate with and support its military and security industry.

Palestinian civil society is calling for a comprehensive military embargo on Israel to end all this cooperation.

“Solidarity with the Palestinian people”

One protester said they took part in the action:

in solidarity with the Palestinian people, who are directly harmed as a result of the weapons manufactured in this factory. The weapons made here are used to maintain Israel’s system of apartheid and ensure the ordinary people of Gaza are kept in an open-air prison. As Elbit profits from their deaths and suffering, it is the duty of people around the world to take action in solidarity.

Activists who occupied Elbit in Kent also told The Canary:

Elbit thinks it can escape our attention by moving to a highly secure compound. We won’t stop exposing their central role in Israeli war crimes, wherever their factories are.

We were successful in shutting the factory down for the day and letting nearby workers know who their new neighbours are.

Featured image via Block the Factory (with permission)