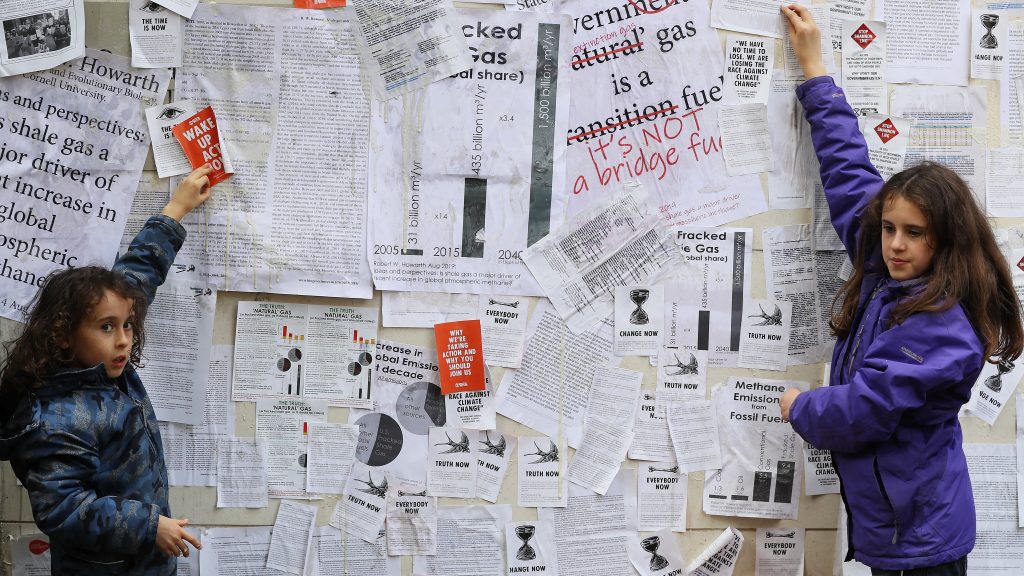 Environmental activists have ‘wallpapered’ the front of a government department with pages of science detailing the climate impact of fracked gas.

A group of protesters, many dressed in boiler suits, pasted printouts of a study by climate scientist Professor Robert Howarth of Cornell University in the US, showing the effects of fracked gas on fossil fuels.

The group pasted the pages on the revolving doors, walls and windows of the department of Communications, Climate Action and Environment in Dublin.

The move is the flagship action of Extinction Rebellion week in the city.

Campaigners are calling for the government to reverse its decision to back proposals for the Shannon-based liquefied nitrogen gas (LNG) terminal in Co Kerry.

It is designed to be a gas terminal, however, campaigners and environmental scientists have voiced their concerns over the proposed plans.

Prof Howarth told the Oireachtas Committee on Climate Action on Wednesday that the methane content of fracked gas made it 100 times more powerful than carbon dioxide in terms of greenhouse gas emissions.

“I urge Ireland to prohibit the importation of fracked shale gas from the United States,” he said.

The government continuously refuses to engage with the overwhelming scientific evidence, so we felt it necessary to bring it to their doorstep.

Shannon LNG would turn Ireland into a pipeline for fracked gas into Europe and would lock us into decades of fossil fuel dependence.

The group of around 100 activists marched from Merrion Square to Minister Richard Bruton’s department building on Adelaide Road.

They waved posters calling for an end to Shannon LNG.

Last week the Irish government approved Shannon LNG as an EU Project of Common Interest (PCI), meaning it can bypass normal planning laws and receive hundreds of millions of euro in EU funding.

This was approved after 44 TDs and a majority of Irish MEPs signing motions opposing the project.

Ireland is being used as a pawn in a geopolitical push from the US to flood Europe with fracked gas.

Donald Trump wants to achieve American energy dominance in the world and has been bullying Europe to buy their fracked shale gas, threatening them with tariffs if they don’t.

Fracking is a leading cause of climate change and is destroying the planet. Bowing to Trump’s pressure, Europe is financing it.

Extinction Rebellion, who described themselves as a non-violent, climate change protest group, have been holding a number of protests throughout Dublin this week and in major cities across the world.