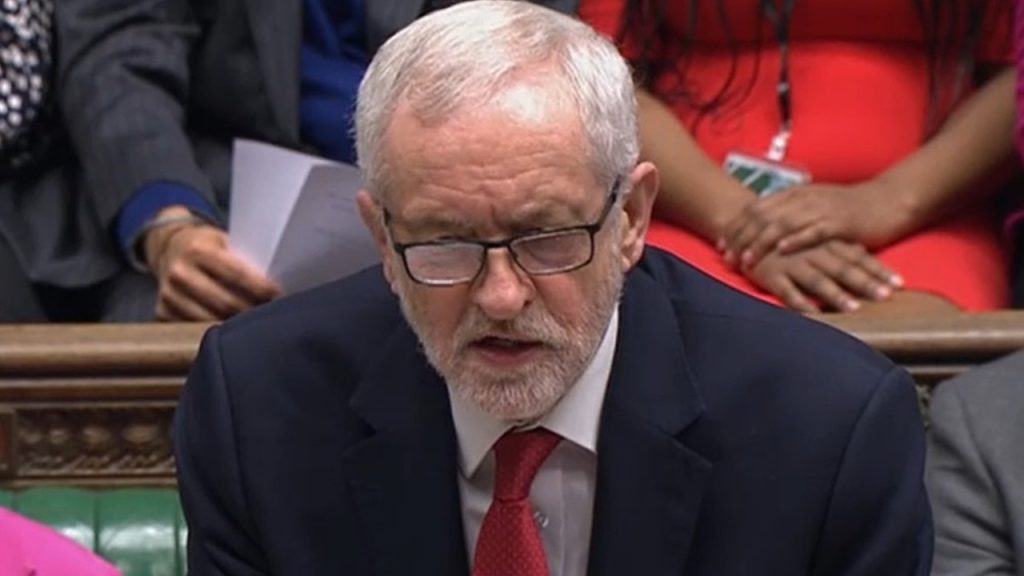 Labour leader Jeremy Corbyn warned Donald Trump’s Middle East peace plan would “lock-in illegal Israeli colonisation” and deny Palestinian people their fundamental rights. He added that Britain must tell the US they are “wrong” on the issue.

Boris Johnson, meanwhile, provided encouragement to the proposal which would leave sizeable areas of the occupied West Bank in Israeli hands.

Speaking at Prime Minister’s Questions, Corbyn said of the US president’s idea:

When the Government meets with the US Secretary of State later today, will he make it clear that the British Government will stand for a genuine, internationally-backed peace plan rather than this stuff proposed by Trump yesterday?

Corbyn said he has the greatest respect for Abbas and those in the Palestinian Authority, adding: “I’ve met them many times.”

He said Trump’s plan “will not bring any move towards peace” and has “no support from any Palestinian anywhere in the world”, adding that Britain should be candid and tell the US it is “wrong”.

Many others spoke out against Trump’s plan both in the UK:

The occupation of Palestine is illegal.

Settlements in Palestine are illegal.

Palestinians have the right to return.

Palestinians have the right to a viable state.

And the struggle for freedom, justice & equality will prevail ✊🏽#FreePalestine

Palestine has a right to exist.

Donald Trump is working hand in hand with Netanyahu to kill off any chances of a Palestinian State.

The Labour movement has a proud history of international solidarity. We must speak out to ensure our government doesn't back Trump's plan. pic.twitter.com/OHa20YJhfu

This is not a peace plan.

It is theft. It is erasure. https://t.co/N2rduGVnze

It must end the Israeli occupation and enable Palestinian self-determination in an independent state of their own alongside a secure Israel. Trump's so-called 'peace deal' doesn't come close, and will only perpetuate the conflict. It is unacceptable.

Corbyn later urged Johnson to ask the US to stop selling arms to Saudi Arabia while they continue the “bombardment” of Yemen.

The Labour leader went on to criticise Saudi Arabia’s record on women’s rights, saying Johnson must make clear any UK trade deal will be dependent on an “improvement in their human rights laws and human rights record, particularly in respect of women”.

Johnson accused Corbyn of being a “supporter and defender of the Iranian regime”, adding the UK raises human rights with Saudi Arabia.

Corbyn said he condemned human rights abuses in every country, including Iran and Russia, before insisting Britain is “at a crossroads” as it leaves the EU.

He said: “The signs are this Government is prepared to sacrifice our country’s interests and values for short-term political advantage and a sell-out trade deal with Donald Trump.”