After the 2019 election, we need media reform now more than ever - Canary 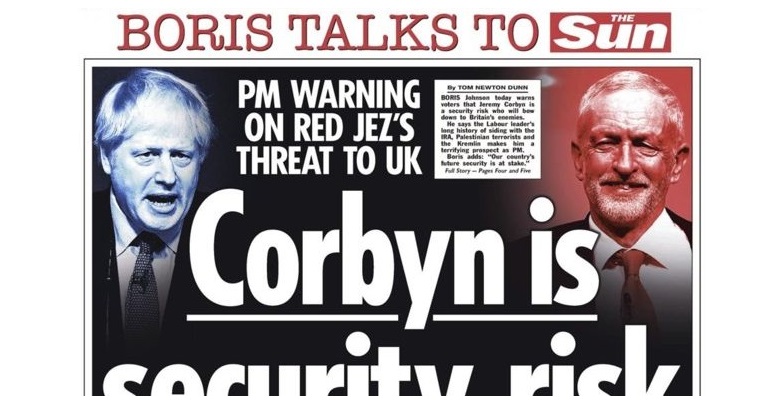 This is a guest piece from Granville Williams, editor of MediaNorth – “the quarterly publication of the Campaign for Press & Broadcasting Freedom (North) which covers the North West, Yorks & Humber and North East of England”. The CPBF (North) “highlights threats to regional media such as the assaults on jobs and conditions in local and regional newspapers, and campaigns for strong regional media”. It also supports “diverse, democratically accountable media” across the country.

When the election was called on 30 October last year, MediaNorth decided to produce ElectionWatch to monitor media coverage of the election. The first issue, explaining why we were launching the initiative, went out on 4 November, and we produced six issues over the election period.

We did a similar election monitoring exercise back in 1992 when Neil Kinnock was leader of the Labour Party. One of the best political commentators back then was the Independent’s Anthony Bevins. And on 3 February 1992, he wrote:

Having worked for nine years as a political correspondent on The Sun and the Daily Mail, I count myself as something of an expert on the insidious nature of the process. To survive and rise in, or on, the ‘game’, you pander to the political prejudice of your paymasters, giving them the stories that you know will make them salivate.

That means putting a sparkling gloss on anything to do with the Conservatives and their policies, whilst denigrating, or ‘ratting’, Labour.

Press coverage of Labour and Kinnock was pretty vile back in 1992. But what we witnessed in the recent election was far, far worse.

Propaganda making a mockery of democracy

It was a disturbing experience, reading what can only be described as undiluted propaganda day after day in the bloc of avid Tory-supporting newspapers which worked closely with the Tory HQ election campaign to maximise the assault on Labour leader Jeremy Corbyn and the Labour Party’s election policies.

The Sun‘s front page on 3 December was typical. Interviewing Boris Johnson, the paper’s political editor Tom Newton Dunn warned readers that Red Jez’s threat to UK: Corbyn is a security risk, backed up by two pages with the headline ENEMY OF THE STATE splashed across them.

The same message was spread across the broadsheet papers: the Sunday Telegraph and Daily Telegraph, owned by the billionaire Barclay brothers, and Rupert Murdoch’s Sunday Times. The latter’s other papers, including the Sun on Sunday, the Sun, and the Times, were also ‘on message’ in promoting this caricature of Corbyn. Finally, we have the Daily Mail and the Mail on Sunday, owned by another billionaire, Lord Rothermere.

These papers had a malign influence on the flow of accurate information in this election. Indeed, their lies make a mockery of democracy. Those who brush aside the impact of these papers, and say people can make their own minds up, ignore the evidence.

A 2016 LSE report, Journalistic Representations of Jeremy Corbyn in the British Press, provides that evidence. It found that 75% of stories about the opposition leader were either distorted or failed to represent his actual views on subjects. The authors asserted that:

Jeremy Corbyn was represented unfairly by the British press through a process of vilification that went well beyond the normal limits of fair debate and disagreement in a democracy. He was also systematically treated with scorn and ridicule in both the broadsheet and tabloid press in a way that no other political leader is or has been. Even more problematic, the British press has repeatedly associated Corbyn with terrorism and positioned him as a friend of the enemies of the UK.

Back in 1992, Anthony Bevins gave another warning:

The partisan mendacity of papers like the Express and the Mail has a wider impact though. Stories planted on their front pages about rifts in the Labour leadership are taken up by television and radio news editors.

While the rat pack hacks are paid to dance to predominately Tory tunes, television and news editors should consider their influential role. They should remember that they are free agents, and that first duty is to the voter at large.

This pattern of propaganda continued in the 2019 election. And the process was magnified as the lies disseminated by the Tory press seeped through into the broadcast media.

One striking example was Jewish Voice for Labour’s (JVL) criticism of the BBC’s coverage of charges of antisemitism in the Labour Party. JVL said:

Over recent months, and with no remission during the election campaign, coverage of allegations of Labour antisemitism has featured repeatedly in the BBC News, and often as the lead item. In news programmes the allegations have been reported as quasi-factual, with no indication that they are fiercely contested. In more discursive formats such as the Today programme or Newsnight, presenters have consistently adopted a negative, attacking stance towards anyone who questions the basis of the allegations.

The Conservatives’ 2019 election campaign was a ruthless masterclass in media control. It was also the most persuasive example of why we need media ownership reform and effective press regulation.

Featured image via The Sun