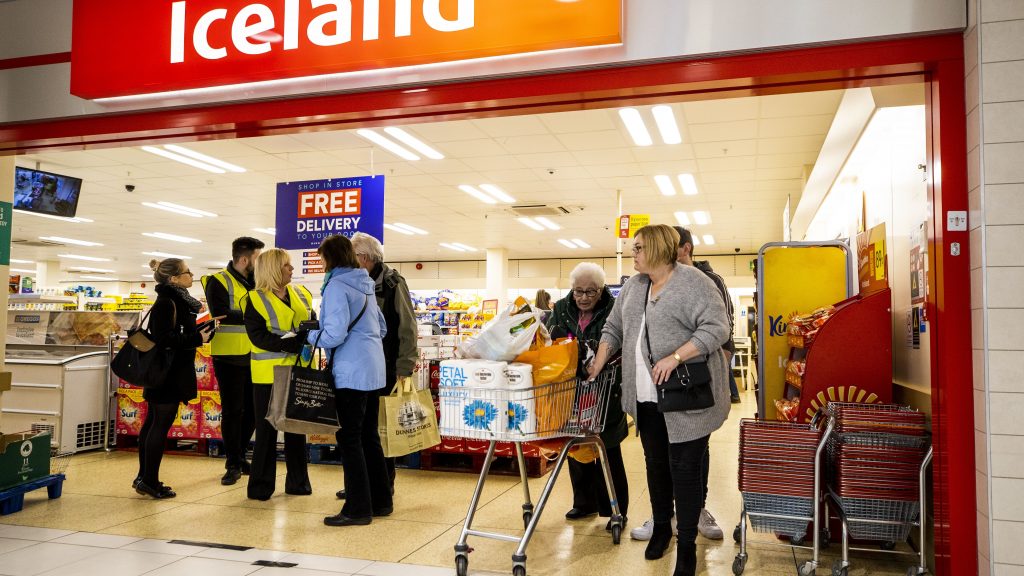 Older people have enjoyed dedicated shopping sessions at some supermarkets.

Pensioners were able to shop at Iceland and Lidl stores before general admittance to the public.

The moves come amid reports of panic buying leaving shelves empty of essentials such as toilet rolls amid concern over the impact of Covid-19.

At the Kennedy Centre in west Belfast, the local Iceland store opened its doors only for older people at 8am.

Kennedy Centre manager John Jones said it had been a chink of light in difficult times.

“It went very, very well, people were very respectful of it, there were no issues with people trying to get into the store that didn’t need it. It was a superb morning and it is going to continue on for the foreseeable future,” he said.

“It’s a tough experience (coronavirus), it is unprecedented and for us we’re taking a chink of light in the bit of darkness that there is at the moment.”

Jones said the staff at the store came up with the idea themselves and it quickly went viral.

“It’s an initiative that the staff on the floor and the manager of that particular Iceland came up with themselves,” he said.

“I was asked by one of the Iceland workers would I mind putting a post up on our Facebook and our Twitter, and it went viral on Sunday evening.”

He added that a number of other stores at the Kennedy Centre were considering similar initiatives.

Iceland Ireland is opening 27 stores between 8am and 9am to customers who are over 65.

It added: “The supermarket retailer will continue to operate as normal as possible over the coming days and weeks while following government guidelines, and ask their other customers where possible to respect this hour and help to give time to this customer group so they can shop in comfort and safety.”

Lidl stores in the north of Ireland and the Republic of Ireland also offered dedicated shopping sessions for the elderly.

Starting on Tuesday, they will run from 9am to 11am every day and include prioritised queuing and additional assistance.

A Lidl statement said: “The retailer asks that the public respect this time period to allow more vulnerable customers to pick up the food and supplies they need.”

Managing director for Ireland and Northern Ireland JP Scally said: “We’re confident in our robust and agile supply chain, and all of our stores are continuing to receive daily deliveries as planned.

“However, we have seen stronger customer numbers in recent days and as members of the public it’s our responsibility to look after the more vulnerable in society in these challenging times.”

Meanwhile, Tesco Ireland is to offer over 65s and family carers a dedicated shopping time at its 151 stores in the Irish Republic.

Every Monday, Wednesday and Friday, starting from Wednesday March 18, these customers will have dedicated access to all Tesco stores up to 9am. Tesco stores open at 7am or 8am, every morning, depending on location.

Kari Daniels, chief executive, Tesco Ireland, said: “While these customers can obviously shop with us at any time, we hope that offering this dedicated time will give these customers some peace of mind during their shopping trip with us.”