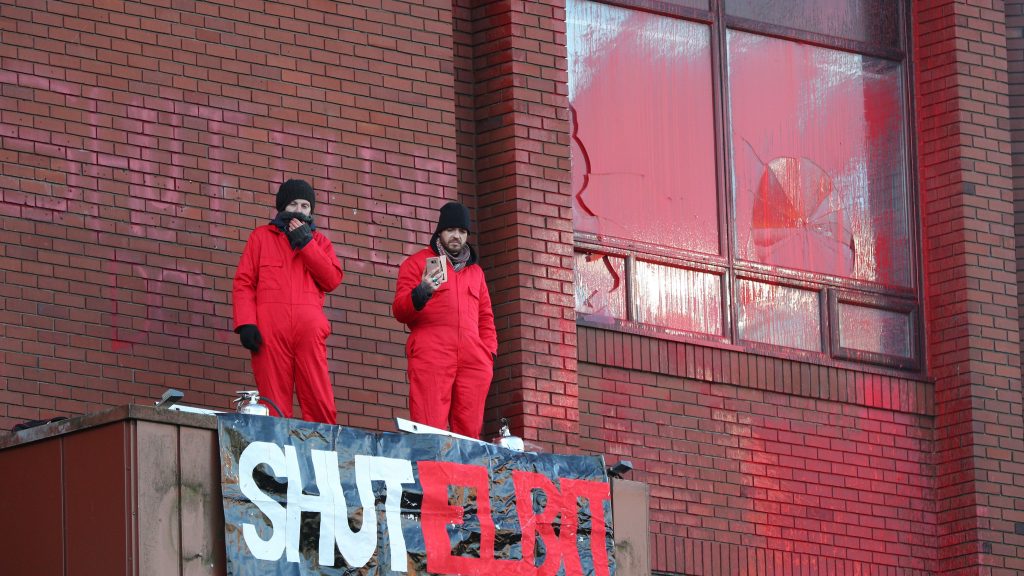 Demonstrators have blocked the entrance of a factory where they claim deadly arms are made.

Protesters from Palestine Action and Extinction Rebellion, armed with banners and red paint, said their early-morning raid on the Israeli-owned Elbit Ferranti factory in Oldham, Greater Manchester, is because they “will not accept an economy based on devastation, occupation and war”. A press release from the two groups stated that:

Activists from Palestine Action and Extinction Rebellion are occupying an Israeli-owned arms factory in Oldham, forcing the site to halt its production of deadly weapons. Several have blocked the entrance of the Elbit Ferranti factory by chaining the gates shut after storming the site in the early hours of Monday morning. Two have climbed onto a ledge on the front of the factory, pouring blood-red paint down the front and spray-painting the words “Shut Elbit Down”. As of yet no arrests have been made and activists continue to shut down the factory, preventing all access to the building.

The action marks the first time the two direct action groups have joined forces. The groups say the new union sends a strong message to Israel’s largest arms firm Elbit that resistance in the UK to its crimes against Palestinians is growing. Extinction Rebellion North and Palestine Action plan to escalate their direct action against Elbit until it is shut down for good.

The groups also condemn the British Government’s deepening relationship with Elbit Systems, which produces surveillance technology for Israel’s illegal Apartheid wall and 85% of the Israeli military’s drone fleet. The protest comes after the Ministry of Defence handed Elbit a £102 million contract for new “sensor to shoot” systems, earlier this month. Since 2018, the British government has bought £45m worth of military equipment from the arms firm, despite its role in aiding Israel’s war crimes and the occupation of the Palestinian people. Extinction Rebellion and Palestine Action demand the UK government to end its relationship with Elbit and complicity in Israeli apartheid.

They have chained the gates and two people have climbed on to a ledge on the front of the factory, where they have daubed red paint over the windows and sprayed the words “Shut Elbit Down”.

A spokesperson for Extinction Rebellion stated:

“We stand resolutely against the apartheid and genocide of the Palestinian people, we will not accept an economy based on devastation, occupation and war. Our communities deserve and want a sustainable, fair and healthy future, for all people.

We recognise the overlapping injustice and exploitation that reinforce the struggles so many of us face. Whether it’s poverty wages, obscene inequality, the destruction of our living world, or racist oppression.

There is a great need to join our voices together, to lift and strengthen our movements for root and branch change.

We hope our collaboration with Palestine Action will help build a movement of movements, shut Elbit Systems down and be another step towards a better world.

Action is the first of its kind – but more will follow

And a member of Palestine Action commented:

The UK Government has profited from the colonisation of Palestine for over 100 years. Now, they’re allowing Elbit to manufacturer weapons here in the UK which have been “battle-tested” on Palestinian civilians.

Evidence of Israel’s war crimes, aided by Elbit’s deadly weaponry, has done nothing to stop the British Government from prioritising profits over people and the planet. The change must come from the people, to uphold human rights where our ‘leaders’ refuse to do so.

This action is the first of its kind, and the first of many more to come – ordinary people coming together to build a movement of movements. We will continue to take direct action until we shut Elbit down and end all complicity in systematic injustice.

Greater Manchester Police said officers are at the scene and have engaged with protesters.

As The Canary has previously reported, activists have targeted Elbit on several occasions. But it is the first time the two direct action groups have joined forces.

The groups say the new union sends a strong message to Israel’s largest arms firm, Elbit, that resistance in the UK to its alleged actions against Palestinians is growing.

Extinction Rebellion North and Palestine Action have vowed to escalate their direct action against Elbit until it is shut down for good.

The protest comes weeks after the Ministry of Defence confirmed that Elbit had won a contract for new “sensor to shoot” systems.

The British Army has invested £102 million in a high-end surveillance system which allows frontline soldiers to detect and engage enemy targets in seconds.

After the deal was announced last month, defence procurement minister Jeremy Quin said: “This contract with Elbit Systems UK not only delivers the very latest in battlefield technology to our frontline soldiers, but also invests in the British defence industry, sustaining more than 500 jobs across the UK.”

The deal involves state-of-the-art thermal sight technology, so that a dismounted joint fires integrator (DJFI) can enhance soldiers’ ability to find and identify targets on the battlefield.

A spokesperson for Elbit Systems UK said they will not be commenting on the situation.