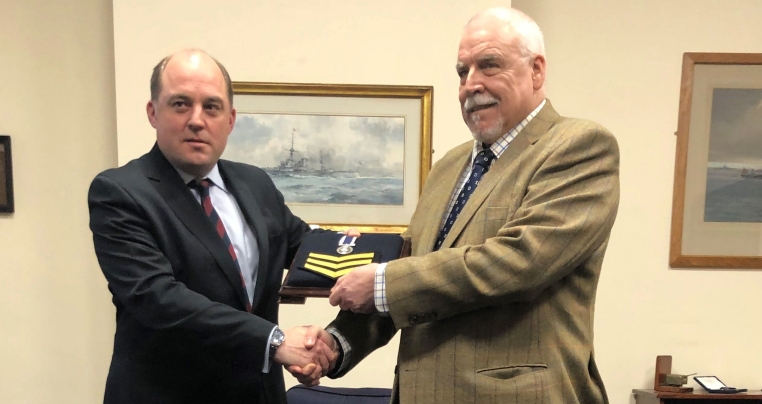 A Royal Navy veteran has called for all servicemen and women kicked out of the armed forces because of their sexuality to be given a pardon and to have their full pensions restored.

Joe Ousalice, 70, made the call after the Ministry of Defence (MoD) announced that veterans who were dismissed in this way can now reclaim the medals that were stripped from them.

Gay people and other members of the LGBTQI+ community were not allowed to serve in the military until a rule change in 2000.

The MoD’s announcement came after Ousalice, from Southampton, Hampshire, successfully took the department to court to have his medal returned.

He was presented with his medal by defence secretary Ben Wallace in January 2020.

The MoD said it wanted to address a “historical wrong” with the launch of the scheme.

But Ousalice, whose 18-year naval career included six tours of the north of Ireland, the Falklands War and the Middle East, said the government should go further by issuing pardons and ensuring those affected receive their full pension.

The former radio operator said: “It really does make my blood boil to think of the way I was treated, it had such an adverse effect on my life for 10 years.

“I would like a pardon from Her Majesty the Queen and for all the others who have been discharged because of their sexuality.

“They have been kicked out because they are gay or bisexual, they have not done anything wrong.”

He called for full pensions to be reinstated, explaining that his discharge meant he received £100 less per month.

He added he was prepared to return to court if the government failed to act.

Ousalice said he was left destitute after he was court-martialled in November 1993.

He said he was acquitted of being found in bed with a rating but found guilty of a second charge of “conduct prejudicial to good order and naval discipline” for his sexuality.

Ousalice added: “I was left worse than penniless, I lost my home as I had no money to pay the mortgage, I lost my girlfriend, my family disowned me.

“I had no food, I had to get food from the farmers’ fields just to survive.

“I even went to the Tamar Bridge and tried to jump off – that’s the effect it had on me. It took 10 years to get my bank balance up to scratch.”

A statement on the gov.uk website says: “Prior to 2000, a number of armed forces personnel were discharged from service on the basis of their sexuality.

“Some received convictions under specified legislation for homosexual behaviour that has now been decriminalised, while others were discharged solely on the basis of their sexuality, without any conviction.

“In the course of their discharge, some personnel either forfeited medals directly, or were prevented from continuing to serve and thus denied the ability to regain medals that might previously have been forfeited for unrelated reasons.

“The MoD is committed to addressing this historical wrong and is introducing a policy which enables individuals to apply to have their medals restored.”

Former personnel can apply to have their case reviewed by the defence council, with successful applicants receiving a new medal from the MoD’s Medal Office.

Relatives of affected ex-military members who have since died are also able to apply for a review.

Caroline Page and Craig Jones, joint chief executives of Fighting With Pride, a charity for LGBT+ veterans, welcomed the move but said they are working with the Office for Veterans’ Affairs (OVA) for reparations for those affected.

They said in a statement: “Today, LGBT+ veterans are finally beginning their journey back to the military family.

“Fighting With Pride looks forward to a better future for them, where they are recognised for their service, their health needs are supported and they are recompensed for the wrongs of the past.

“We are also pleased to see the Government’s further commitment to investigate the long-term impact of being dismissed from our armed forces, particularly in regard to the health, housing and employment of LGBT+ veterans, many of whom today still live in poverty and beyond the protections of the Armed Forces Covenant.”