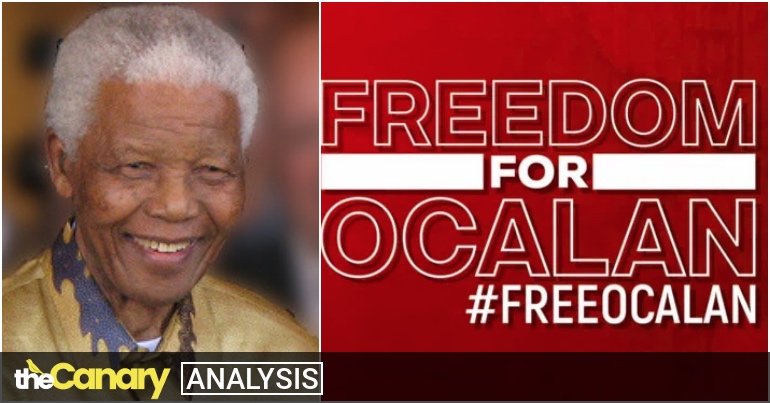 Demonstrations have taken place around the world to mark the anniversary of the capture of Abdullah Öcalan. Millions of Kurdish people see 71-year-old Öcalan as their leader and political representative. He was abducted by international security agents – including the CIA – 22 years ago today, and has been imprisoned in isolation by Turkey for almost a third of his life. The 15 February is a day of mourning for Kurds, known as ‘Roja Reş’, or Black Day.

Öcalan is a key figure in the Kurdish people’s struggle against their oppressor, Turkey. He co-founded the Kurdistan Workers’ Party (PKK) in 1978, which began an armed struggle against the Turkish state in 1984. Over the decades, the PKK’s tactics have evolved, and from his prison cell, Öcalan has produced many writings critiquing nation states, patriarchy and capitalism. His books are seen by many as key to mapping out peace in the Kurdistan region. Öcalan’s ideas have also been a cornerstone of the Rojava revolution in northern Syria.

Even social media outlets target campaigners who call for Öcalan’s freedom. Facebook consistently blocks posts about Öcalan, censoring groups and individuals that upload images of him. It is for this reason that this article appears without an image Öcalan. And yet European courts have insisted on numerous occasions that the PKK is simply a party to an ongoing conflict, not a terrorist organisation.

“The Nelson Mandela of our time”

The Canary spoke to an activist from the Kurdistan Solidarity Network about the anniversary of Öcalan’s capture. He said:

Abdullah Öcalan is rightly compared to being the Nelson Mandela of our time, in that his unjust life imprisonment in isolation –which is abuse and torture – is crucially tied to the liberation struggle of the Kurdish peoples. He has said time and again that actually he doesn’t want to be released if the Kurdish people aren’t liberated from their colonial oppression.

Öcalan has released texts whose central pillars are:

1) anti-patriarchy in the form of women’s revolution, including women’s armed self-protection military units (imagine how liberating that would be if replicated across the patriarchal societies of the world!).

2) social ecology to realise the integral link to life in society with all life in the environments of the world.

3) anti-racist and decolonial in its struggle for full participatory democracy in Kurdistan and the whole world, with seats in all structures of power for women, all ethnicities, religious communities, youth and political structures (including liberatory projects) in society.

To understand why it is so essential to release Öcalan from prison, it’s important to outline the history of the Kurdish struggle against Turkish fascism.

There are around 30 million Kurdish people worldwide, most of whom live in the geographic region of Kurdistan, which lies within Turkey, Syria, Iraq and Iran. The largest population of Kurds live within the borders of Turkey, making up almost 20% of the country’s population. After the founding of the republic of Turkey in 1923, Kurdish citizens were targeted. Kurdish languages were repressed, the words ‘Kurd’ and ‘Kurdistan’ were banned, and Kurdish citizens were renamed ‘mountain Turks’ by the state.

In the 1980s, hundreds of thousands of Kurdish people were detained and tortured in Turkish prisons. The 1990s were even more horrifying as Turkish security forces burnt down more than 3,000 Kurdish villages in an attempt to wipe out Kurdish culture and identity (but under the guise of fighting the PKK). To this day, hundreds of Kurdish women, known as the Peace Mothers, demonstrate all over Turkey. They say:

Under Recep Tayyip Erdoğan’s fascistic presidency, the situation for Kurdish people has gone from bad to worse. In 2015, bomb blasts ripped through a pro-Kurdish election rally in the Kurdish city of Amed, killing five, while a month later another bomb killed 34 Kurdish youths in Suruç. And in October 2015, at least 128 trade unionists and supporters of the pro-Kurdish HDP party were killed by two more bombs in Ankara while attending a peace rally. The Turkish state blamed the attacks on Daesh (ISIS/Isil), yet many Kurdish people laid the blame squarely on the government.

After the bombings, Kurdish people declared autonomy in a number of Kurdish cities within Turkey. The Turkish state used artillery and tanks on the cities’ residents, carrying out its worst attacks on the Kurdish population since the 1990s. The military besieged towns, and thousands were murdered, tortured or displaced.

Things haven’t got much better. In the last five years, Turkey has invaded Rojava, north-east Syria, and is alleged to have used chemical weapons on civilians. It has invaded and occupied Afrin, launched a major drone attack on Idlib, and murdered its own civilians. It has continued a war in Libya, while repeatedly bombing Iraqi Kurdistan. And on Sunday 14 February, the Turkish military was forced to retreat after carrying out airstrikes in an attempt to occupy the Gare region of Iraqi Kurdistan.

There are currently tens of thousands of political prisoners in Turkey, including activists, musicians, academics, human rights defenders, writers, and politicians.

Releasing Öcalan is key to peace

The Kurdish diaspora and supporters around the world argue that the release of Öcalan is vital for there to be a resolution to the Kurdish question. As more and more young Kurdish people study their leader’s writings, Öcalan’s roadmap to peace provides the latest generation with hope. Peace in Kurdistan argues:

Öcalan’s record in the struggle for peace and reconciliation between Turkey and Kurds needs to be generously acknowledged. This is the key to breaking the deadlock and moving forward…

This anniversary of Öcalan’s capture by means of an undignified collaboration of international security agencies shows that the attempt to destroy the Kurdish movement by removing its leadership has failed and that a new approach is urgently required; one that is based on beginning the process of talking to each other and reaching agreement.

As thousands march around the world today, the message is clear: Öcalan needs to be immediately freed. Until then, millions will continue to campaign and protest tirelessly.

Featured image via Wikimedia and Freedom for Öcalan