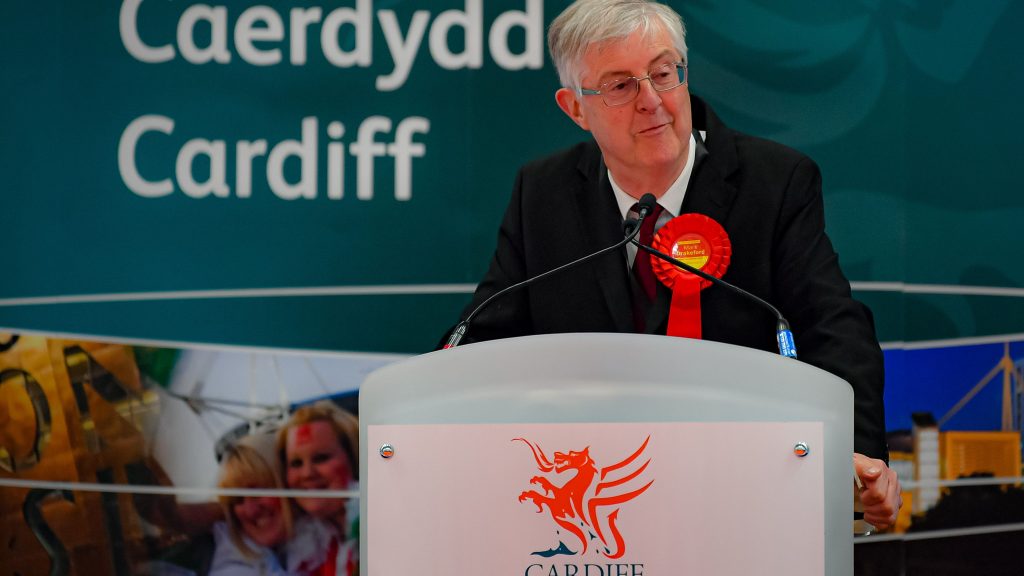 Mark Drakeford has vowed to be “radical” and “ambitious” in government as his party looks set to remain in power in Wales. Meanwhile, Keir Starmer has been accused of having no “vision”.

Labour has equalled its best ever Senedd election result by winning 30 seats – just one short of a majority – though it is not expected to take any of the remaining four regional seats left to be declared on 8 May.

If it does not pick up any of the remaining seats, Drakeford can choose to form a minority government. Or, he may also invite members of other parties into a Labour-led administration, giving the party greater control of the Senedd.

Welsh Labour put the “extraordinary set of results” down to Drakeford’s leadership during the coronavirus pandemic, which has seen the first minister’s approach go down well with voters.

Asked if he planned to continue his cautious brand of politics during a new administration, Drakeford told the PA news agency:

Well, absolutely as far as coronavirus is concerned. The pandemic has not gone away.

A government I lead will continue to follow the science to do what our medical advisers tells us we should do, and that does mean doing things in a way that continues to keep Wales safe.

But on other matters, our manifesto is a radical manifesto with a host of ideas that are ambitious for Wales.

I’ll be very keen to ensure that we give that the most powerful sense of momentum behind it to get those things happening here in Wales.

Following a “shattering” set of elections for the national Labour Party, Keir Starmer also spoke about what would happen next:

Keir Starmer asked for concrete policy changes Labour will now make in response to these election results, tells the BBC that he will "change the things that need changing and that is the change that I will bring about."

This is Keir Starmer's way of saying there'll be a re-shuffle.

Incapable of answering a question, evasive and slippery. The public rightly despises this stuff. Starmer looking like a colossal liability today. pic.twitter.com/rOoFiBluNd

Some have criticised Starmer for having no “vision”:

A poll from Channel 4 News suggests the main change Starmer will need to “bring about” relates to his own leadership:

NEW: Exclusive polling for @Channel4News by @JLPartnersPolls shows the top reason given for not voting Labour in elections in England yesterday was Sir Keir Starmer's leadership.

More in @GaryGibbonC4's report on @Channel4 and @All4 tonight at 7pm.

Drakeford returned to Labour’s offices in Cardiff for reserved celebrations after a night of constituency results gave the party 27 seats. The first set of regional results led Labour to equal their best ever result. Drakeford will visit Porthcawl, Bridgend, on the afternoon of 8 May to make a speech to party members.

Welsh Liberal Democrat leader Jane Dodds, who won a regional seat in Mid and West Wales after her party lost the Brecon and Radnorshire constituency to the Conservatives, said she has yet to be approached by Drakeford to help form the next government. She told BBC Radio Cymru:

I need to speak to other people within the party and we shall have to see.

Meanwhile, the Welsh Conservatives have 14 seats, including taking Vale of Clwyd from Labour, and Plaid Cymru have 11, having lost its high-profile former leader Leanne Wood’s Rhondda seat to Labour. Wood said on her Facebook page that the result was “disappointing”, but that her team can “hold our heads high in the knowledge that we ran a clean and honest campaign, we did not denigrate our opponents and we worked hard”.

Polling at the start of the campaign suggested Labour was facing its worst ever result and was at risk of winning as few as 22 of the Senedd’s 60 seats, a loss of seven from 2016, though later polls suggested a stronger showing.