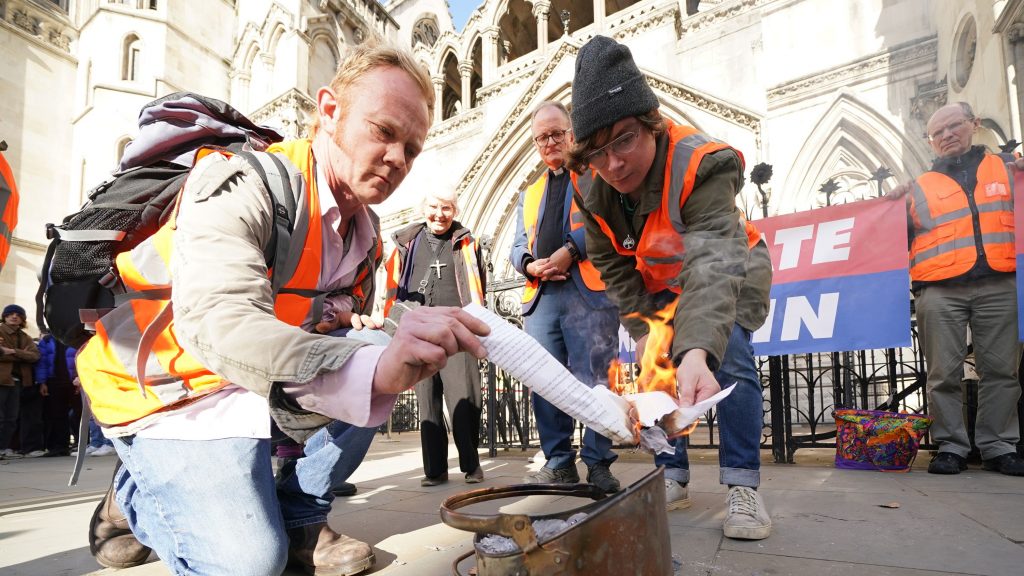 Insulate Britain demonstrators burned their court orders banning their road-blocking protests outside the Royal Courts of Justice as a High Court judge extended the injunctions until the end of next month.

Members of the Extinction Rebellion offshoot have repeatedly blocked major roads, including the M25 and the M4, since 13 September.

In response, National Highways has been granted three injunctions banning the demonstrations on the M25, around the Port of Dover and on major roads around London.

At a second public High Court hearing on Tuesday, the three injunctions were extended until 30 November.

“Boris Johnson should be on trial for treason”

They create an immediate threat to life, putting at risk the lives of those protesting and normal motorway users, as well as those reliant on the movement of emergency services vehicles to protect the public and save lives.

During Tuesday’s hearing Insulate Britain members were given the chance to argue against the injunctions.

I just want to say publicly Insulate Britain are in the process of trying to uphold the law, the UK Government has a responsibility to keep temperatures below 2C degrees.

Boris Johnson should be on trial for treason.

Breaching a court order can result in a committal for contempt of court, which if proved may be punished with up to two years in prison and an unlimited fine.

“It’s a sign of our determination to carry on protesting”

During the hearing, other members of Insulate Britain were outside the Royal Courts of Justice in London and were seen burning papers.

The papers that are being burned are the front covers of the injunctions that have been served on us as individuals.

It’s a sign of our determination to carry on protesting, to carry on raising this issue until we see some action that we can believe in.

According to court documents, 112 people have been served with court orders related to the Insulate Britain protests.

When asked about criticism of the group,  Onley said:

Doing this protest in the last month is probably the most horrible thing I’ve done in my life.

But we feel that we’ve been put in a position where unless protests cause serious disruption they are just not going to be taken any notice of.

Justice Lavender said that he would extend the three injunctions but was “reluctant” to make orders with no end date.

A fourth injunction was granted to Transport for London (TfL) on October 8.

National Highways and TfL will now return to the High Court on October 19 for a further hearing.