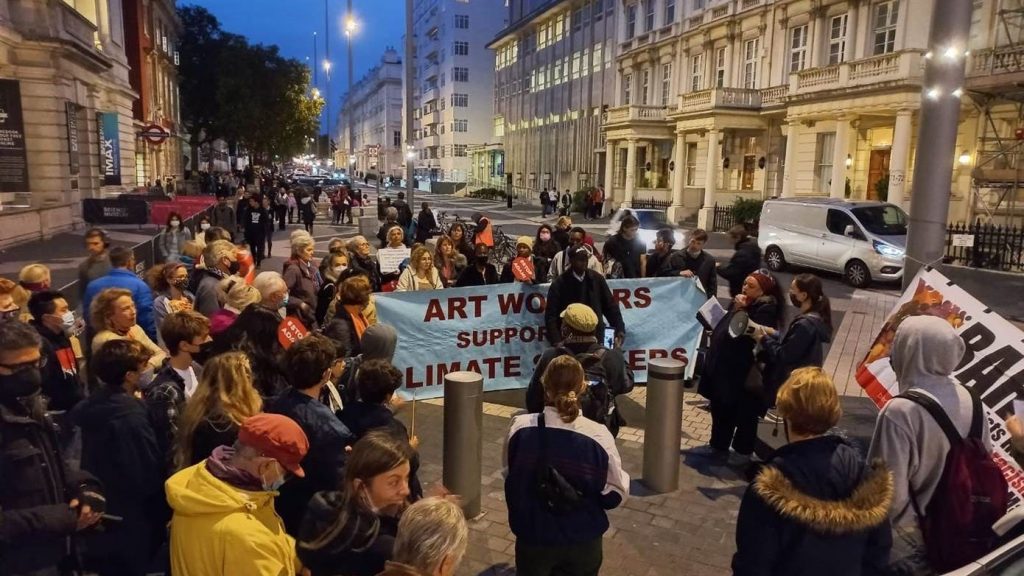 Young climate activists who slept overnight in London’s Science Museum have said they will be approaching the first visitors of the day to tell them about the establishment’s sponsorship deals with fossil fuel companies.

Around 30 members of the UK Student Climate Network (UKSCN London) camped in the museum’s lobby on Tuesday night, after holding a candlelit vigil for “the victims of the museum’s fossil fuel sponsors: Shell, BP, Equinor and Adani”.

The Metropolitan Police said officers were in attendance and no arrests have been made.

Demonstrator Izzy Warren, 17, said the group, which includes school pupils, university students and scientists, chose to occupy the museum because the owners had ignored their petitions, letters and boycotts.

We would really like to greet people who come to the museum this morning so they are aware of what they are supporting, and what they are paying for.

The Science Museum is blatantly taking money from some of the worst perpetrators of the climate crisis.

The director has continued engaging with the fossil fuel industry while ignoring the concerns of young people, scientists, victims of the climate crisis and impacted communities.

It’s time for young people and scientists to reclaim this space from its destructive sponsors.”

The demonstration comes after the Science Museum last week announced a new gallery, called Energy Revolution: The Adani Green Energy Gallery, which is supported by a subsidiary of the Adani Group.

Adani is a multinational conglomerate involved in coal extraction and coal-fired power stations.

Biologist Dr Alexander Penson, who took part in the sit-in, said it was “appalling” that the museum was persisting in fossil fuel sponsorship and starting a new relationship with Adani.

In an Instagram Live video by UKSCN London from inside the museum, he said:

The way that they tell it is that they are working with the green energy arm of the company and they then just forget about the coal.

The museum has also faced criticism for partnering with Shell to fund its Our Future Planet exhibition about carbon capture and storage and nature-based solutions to the climate crisis.

The agreement with the fossil fuel giant included a gagging clause, committing the museum not to say anything that could damage Shell’s reputation.

“Now is the time to abolish fossil fuel companies”

UKSCN activists attempted to spend the night in the museum in June in protest at the Shell sponsorship, but abandoned the move when they were threatened with arrest by police officers.

The group also previously staged demonstrations outside the Science Museum, alongside activists from the environmental movement Extinction Rebellion.

We are less than a week away from the start of Cop26.

Now is the time to abolish fossil fuel companies, not collaborate with them or invite them into our cultural spaces.

The Science Museum’s senior management and board have shut down any attempt at a conversation with young activists and scientists.

Meanwhile, they are welcoming some of the worst perpetrators of the climate crisis with open arms … The Science Museum needs to seriously rethink its sponsorship deals before it loses its remaining credibility and legitimacy as a scientific institution.”

The occupiers negotiated with museum staff to be moved from the second floor of the building to the Energy Hall near the main entrance so that they would have access to toilets for the whole night, they said in a video posted to Twitter.

UKSCN London had earlier tweeted that the institution was “denying us access to basic safety and hygiene by locking the toilets and refusing to give us safe, sanitary and dignified toilet facilities”.