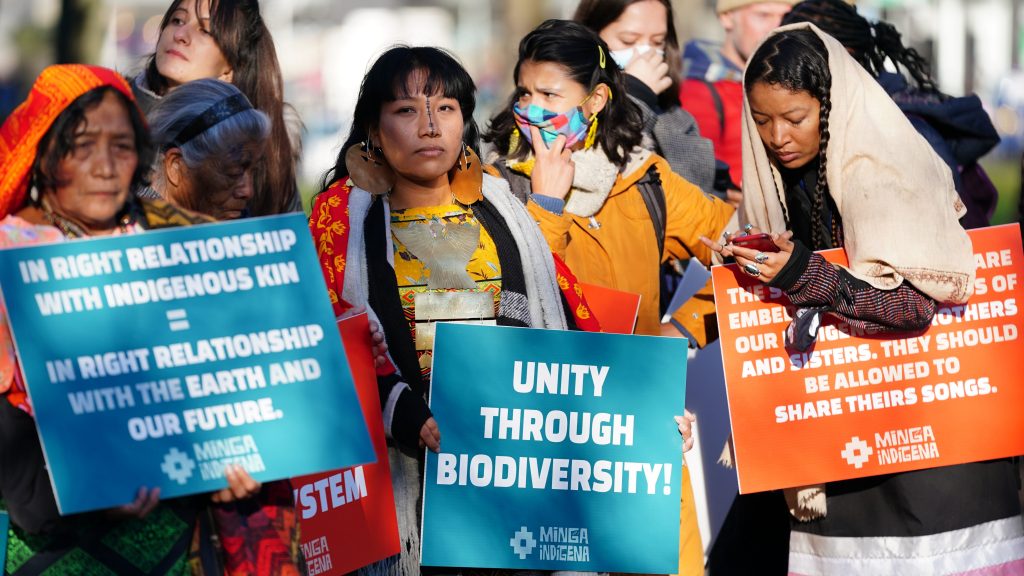 Indigenous people whose island homes are sinking underwater due to climate change have marched on the COP26 venue in Glasgow aiming to “heal the legacy of colonialism”.

Groups from Panama, Amazonia, Patagonia, Alaska, and the wider USA were joined by activists as they progressed through the streets to the sound of drums and wood pipes. They marched from Glasgow Green along the Clyde to the COP26 campus, where they were initially denied access.

A small number of the indigenous people were shortly afterwards allowed into the conference where they planned on meeting with the president of COP26, Alok Sharma.

Agar Iklenia Tejada, 31, came to Glasgow from Panama and is a member of the Guna people, who live largely on islands off the coast. She started crying when speaking about the plight of her home.

One of the islands is the one that I was born in and grew up in, so it’s very emotional to even talk about it.

She said her grandmothers are refusing to leave the partially submerged island and that the loss of her home makes her angry. She said:

However, we are going to keep fighting to conserve and preserve our traditions, our origin and who we are

She said that people are polluting, mining for gold, and cutting down trees, and added:

Agar brought the largest ever “mola” – a traditional hand sown cloth applique unique to the Guna people – to Glasgow with the help of the NGO Geoversity Foundation. She and her fellow indigenous people carried it through Glasgow’s streets to the venue for the global gathering.

Machi Jorge Kilakeo, of the Mapuche Nation in Chile, said they had come to COP26 with their “hearts open”. He added: