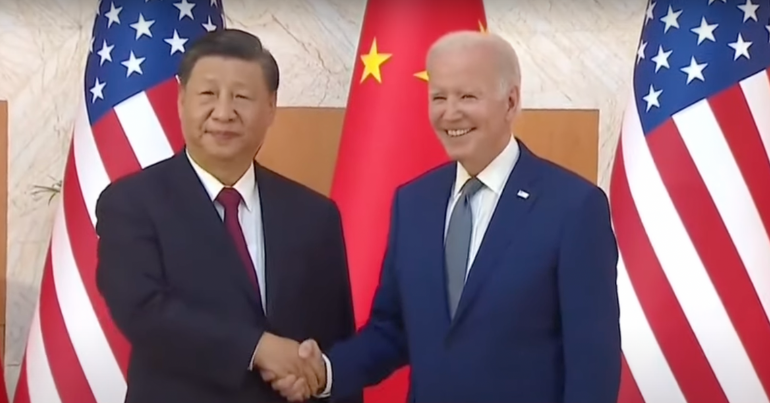 0 comments
Support us and go ad-free
Presidents Joe Biden and Xi Jinping shook hands in front of the two nations’ flags before starting a long-awaited sit down on the Indonesian resort of Bali ahead of a Group of 20 summit, following months of tension over Taiwan and other issues.
Biden said that Beijing and Washington “share responsibility” to show the world that they can “manage our differences, prevent competition from becoming conflict.”
Xi told Biden that the world has “come to a crossroads,” and added:


The world expects that China and the United States will properly handle the relationship.

Despite the upbeat public statements, both nations are increasingly suspicious of each other, with the United States fearing that China has stepped up a timeline for seizing Taiwan.

US officials said ahead of the meeting that Biden hoped to set up “guardrails” in the relationship with China and to assess how to avoid “red lines” that could push the world’s two largest economies into conflict.

The most sensitive issue is Taiwan, the self-governing democracy claimed by China.

The United States has been stepping up support for Taiwan, while China has ramped up its threats to seize control of the island. After House Speaker Nancy Pelosi visited Taipei in August, China reacted by staging unprecedented military drills.

On the eve of his talks with Xi, Biden met with Japanese Prime Minister Fumio Kishida and South Korean President Yoon Suk-yeol on the sidelines of a Southeast Asian summit in Cambodia, with the three leaders jointly calling for “peace and stability” on the Taiwan Strait.

Biden is also expected to push China to rein in its ally North Korea after a record-breaking spate of missile tests has raised fears that Pyongyang will soon carry out its seventh nuclear test.

US officials and experts have come to believe that Xi has no desire for moderation, with the new Central Committee of the Chinese Communist Party stacked with hardliners and lacking any obvious heir apparent.

Yun Sun, a senior fellow at the Stimson Centre in Washington, said:

We all knew that Xi Jinping was going to prevail. But I think people are still surprised that Xi Jinping could not even find the grace to save some accommodation for his political opponents.

With the Party Congress over, Xi now has greater space and flexibility to focus on his international push for a stronger China, she said. Sun concluded:

Both Biden and Trump identified China as the preeminent global competitor to the United States. But while Trump by late in his term was railing against China on everything from trade to Covid-19, Biden has supported talks on narrow areas of cooperation. Biden told reporters Wednesday he would speak to Xi about each country’s “red lines” in the hopes of avoiding conflict.

Biden has said three times that the United States would defend Taiwan militarily if China attacks, although the White House has walked back the apparent shift from longstanding US ambiguity.

Biden’s meeting with Xi is notable as a departure from US-China relations under Trump. As the Canary’s John McEvoy reported:

the US has adopted an increasingly confrontational stance towards China. In January 2018, Trump launched a trade war with China. In 2019, it imposed a ban on Chinese telecommunications firm Huawei. And following the coronavirus (Covid-19) pandemic, Trump has consistently attempted to distract from his administration’s failures to contain the virus with anti-Chinese racism.

Another element that casts doubts on this seemingly happy proceeding is the alliance of Australia, the UK, and the US. As the Canary’s Joe Glenton explained:

Australia, the UK, and the US have signed a new military pact they say will protect their countries. The allies claim an AUKUS (pronounced ‘awk-us’) alliance will support a “peaceful and rules-based international order”. But critics have called the move a new Cold War against China. And some question the Western countries’ decision so soon after defeat and withdrawal from Afghanistan. It seems to ignore key lessons: that US power is in decline and that expeditionary warfare is a recipe for disaster.

Indeed, Yun doubted China would be as obliging as they may appear, saying that Xi views co-operation as transactional:

With competition the main theme of the US’s China policy, why would China cooperate?

Their calculation is that they are not going to do anything from the goodness of their hearts. They want to see the US give something.