DWP removes responsibility for disabled people from its boss

The new boss at the Department for Work and Pensions (DWP) is no longer responsible for disabled people or policies affecting them. That’s the latest update on the official UK government website.

Now, the website has been updated – and this sentence has been completely removed: 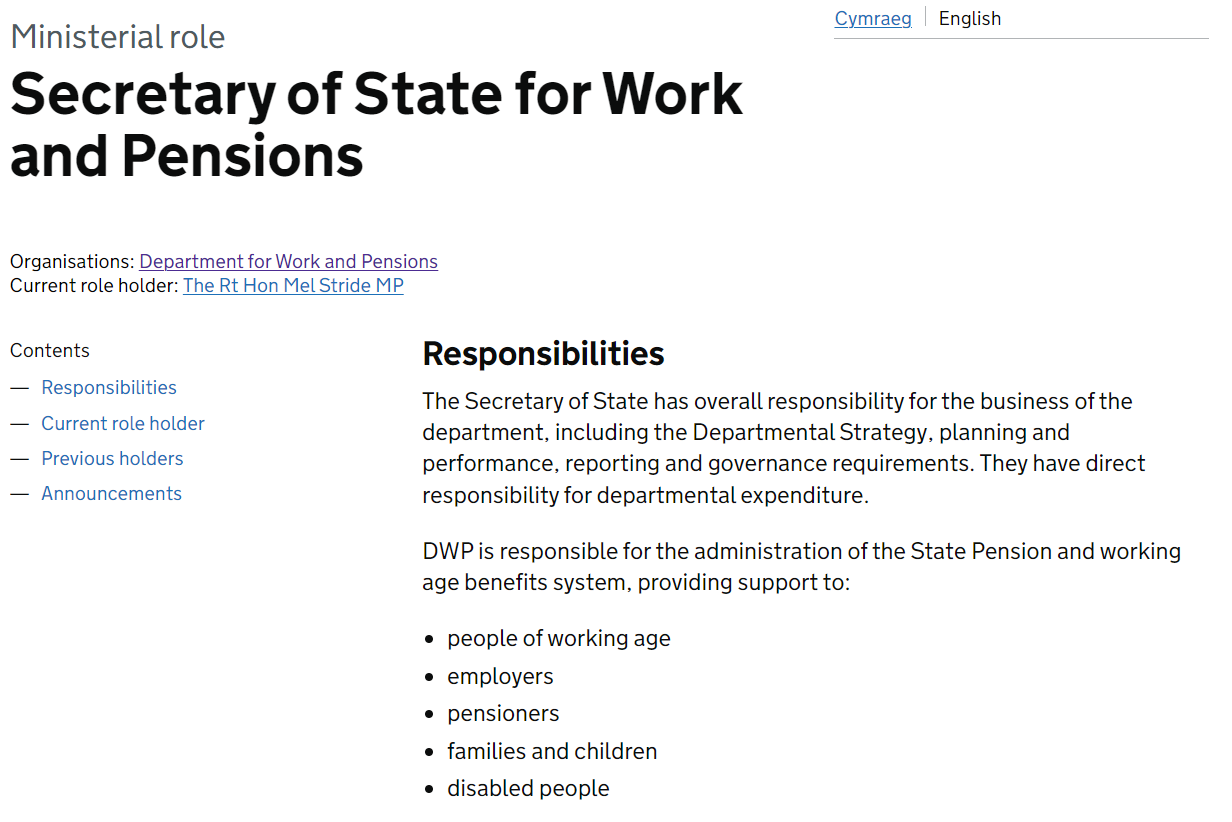 So, who is responsible for the willful negligence and human-rights-violating policies that the DWP has enacted over the years? It’s now a minister.

Chaos at the department

As the Canary previously reported, Rishi Sunak’s government dragged its heels on appointing a new minister for disabled people. However, the previous Liz Truss government also downgraded the role – from parliamentary under-secretary of state to its “junior” equivalent. Then the government U-turned, and the new minister is Tory MP Tom Pursglove. He was previously immigration minister under Suella Braverman, at a time when the chaos at the Manston detention centre was worsening. So, when it comes to government policy, he hardly has a track record of compassion.

The Canary asked the DWP for comment. We specifically wanted to know why it had removed responsibility for disabled people from Stride. It had not responded at the time of publication. A DWP spokesperson told the Canary:

The secretary of state has strategic oversight of all areas of DWP work, including disability policy. We also have a dedicated minister for disabled people, with minister of state status.

The DWP has treated disabled people like second-class citizens for decades. As the Canary previously stated:

It’s hardly news that the Tories don’t give a shit about disabled people. After all, in 2016 the UN accused successive Tory-led governments of “grave” and “systematic” violations of disabled people’s human rights. More recently, on Boris Johnson’s watch 60% of coronavirus (Covid-19) deaths were disabled people. And the DWP’s assessment process for health-related social security is not, and has never been, fit for purpose – all while delivering real-terms cuts to people’s money at the same time.

Now, the DWP can’t even be bothered to make disabled people a priority.

Meanwhile, the government has delayed the publication of an important disability policy document. As Disability News Service (DNS) reported, Labour’s shadow minister for disabled people, Vicky Foxcroft, said that in doing this the DWP has left an “illegal” disability strategy in place. Foxcroft also told DNS:

The government needs to get a grip and deal with the challenges disabled people face. If they can’t, we should hold a general election now.

Clearly, the DWP is not getting a grip – it has downgraded who is responsible for disabled people in its own department. Yet again, its insulting behaviour towards disabled people has shown that the department really doesn’t give a shit.

Featured image via Chris McAndrew – Wikimedia, resized to 770×403 under licence CC BY 3.0, and Wikimedia