Stormzy hits back at Jeremy Corbyn's detractors in new interview 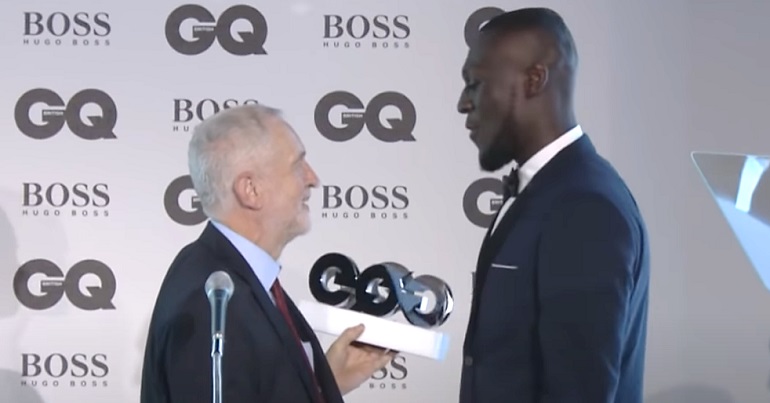 Musician and rapper Stormzy has reiterated his support for former Labour leader Jeremy Corbyn – saying if the MP is a “villain” then “shit’s madder than I ever thought”.

Stormzy: Corbyn “gets it”

Stormzy threw his weight behind Corbyn’s Labour in the 2017 and 2019 general elections. In 2017, the musician said of Corbyn:

My man, Jeremy! Young Jeremy, my guy. I dig what he says. I saw some sick picture of him from back in the day when he was campaigning about anti-apartheid and I thought ‘yeah, I like your energy’. I feel like he gets what the ethnic minorities are going through and the homeless and the working class.

Stormzy was also part of the #Grime4Corbyn campaign, which aimed to get young people to support Labour. The feelings were mutual – with Corbyn presenting him with a GQ award in 2019. Now, Stormzy has given another interview to GQ Magazine. Once again, he has praised the former Labour leader – and also dragged his opponents.

It’s like when you encourage children to make the right decision and they make the wrong one even after you’ve explained everything. And you think, A’ight, that’s your decision… you try have your cake and eat it then… Even the way things have panned out… I’m not gonna say I told you so, but…

Of course, things have panned out disastrously since the 2019 election – with successive Tory governments waging class war against the rest of us. So Stormzy’s reaction should not be surprising. However, the musician also pointed to a deeper issue with how Corbyn’s time as Labour leader panned out.

As the Canary has documented, the corporate media vilified Corbyn. Members of his own party worked against him to ensure he was defeated. Keir Starmer booted him out based on the manipulation of a report into antisemitism under Corbyn’s tenure, and now Starmer is refusing to let Corbyn back in as a Labour MP. Meanwhile, the Tories have been busy wrecking the country. So, yeah – Stormzy is a bit pissed.

It was really disheartening. I just thought so highly of him and I still think so highly of him and I think, Well if they can make him out to be a pagan then things are worse than I thought. I mean if he’s the villain in the grand scheme of things, then shit’s madder than I ever thought because whatever your politics or your policies, that’s one thing. But in terms of his intentions they were 100 per cent for good. I mean, if we’re talking about superheroes against evil villains, I know he was for good. And the way people spun it, I just thought, Wow, this is scary.

Stormzy’s comments probably sum up the feelings of many people. The UK is on its knees – but it could have been so different.