Dominic Raab sums up the Tories' approach to Anti-Bullying Week 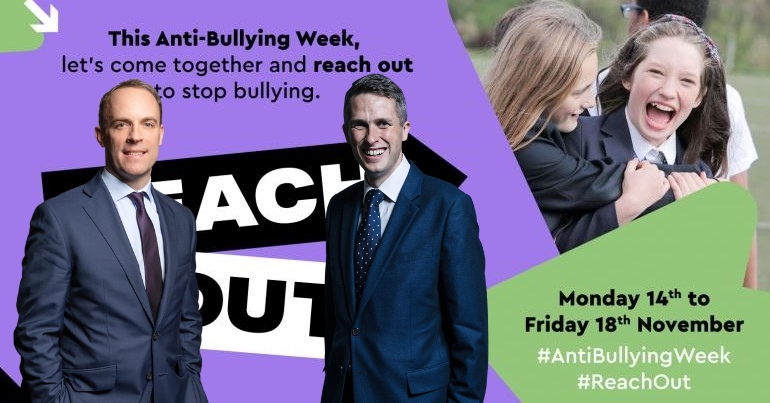 2022’s Anti-Bullying Week is running from 14 to 18 November. In 2020, the then-Tory government had a minister make a speech to mark the occasion. However, this year the silence has been notable. Fitting really, given the Tories are embroiled in an ever-worsening bullying scandal themselves – with Dominic Raab now at the centre of it. Raab has asked for an inquiry into the complaints and as the Guardian report:

It follows a series of allegations, reported by the Guardian and other publications, that a civil servant and others found Raab’s manner could be demeaning and overly abrupt, and that this did at time feel like bullying.

Bullying affects millions of lives and can leave us feeling hopeless. But it doesn’t have to be this way. If we challenge it, we can change it. And it starts by reaching out.

‘Reach out‘ is the focus of this year’s events. The ALA said that this:

came about following consultation with teachers and pupils by the Anti-Bullying Alliance which coordinates Anti-Bullying Week every year in England and Wales. Teachers and children wanted a theme that empowered them to do something positive to counter the harm and hurt that bullying causes.

However, the Tory government has clearly not been listening to Anti-Bullying Week sentiment – it’s up to its neck in accusations of horrible, appalling behaviour.

The previous Liz Truss-led administration was no stranger to bullying – with senior Tory MPs physically manhandling others to try and get them to vote in a crucial debate. And, under Rishi Sunak the allegations of bullying have come thick and fast. Gavin Williamson has been accused of disgraceful behaviour towards other MPs and civil servants. This included telling a civil servant to “slit your throat” and “jump out of the window”.

Of course, this is nothing new. Under David Cameron, the Tory Party had to conduct an internal investigation into one of its members over bullying. In a report, Mark Clarke was accused of bullying 13 people. In 2018, a Freedom of Information (FOI) request revealed there had been over 500 complaints in three years by civil servants in government about bullying or sexual harassment towards them.

However, it now appears that the rot in heart of government is still entrenched. Civil servants and others in government have accused justice secretary Raab of bullying. Now that he’s asked for an investigation into himself it would appear that he’s set to deny the allegations.

Dave Penman, chair of the FDA union, said concerns have been raised about the conduct of other ministers…

He said civil servants do not raise official complaints because they do not feel they will be taken seriously because of the way the complaints system works.

Asked by Sky News’ Kay Burley to confirm if civil servants have told the union that several ministers in Rishi Sunak’s government have behaved inappropriately towards them, Mr Penman said: “Yes.”

And asked if that behaviour was bullying, he said it was.

#KayBurley – So there are several other ministers in Rishi Sunak's government who have have behaved inappropriately towards civil servants?

was found to have bullied staff but Boris Johnson, the prime minister at the time, did not respond for six months and then dismissed the findings.

It’s of little wonder that other civil servants have recently voted to take strike action, given the toxic work culture they have to tolerate.

The ALA says that anti-bullying work:

doesn’t stop with young people. From teachers to parents and influencers to politicians, we all have a responsibility to help each other reach out. Together, let’s be the change we want to see. Reflect on our own behaviour, set positive examples and create kinder communities.

The Tories have done none of this. They should be ashamed to be in government during Anti-Bullying Week – especially with a senior minister currently facing such accusations.