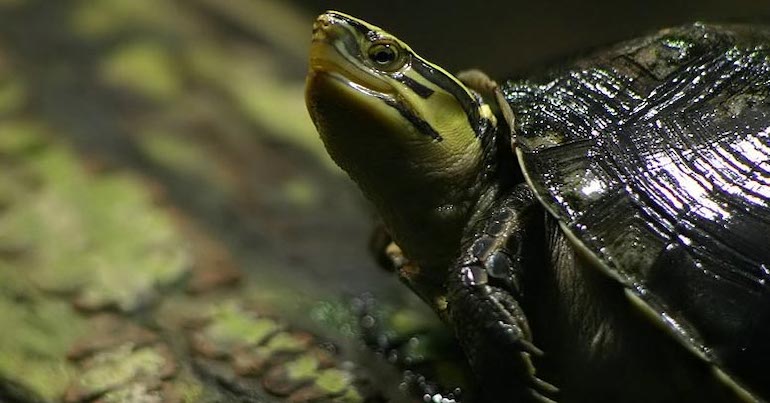 The trade in Southeast Asian box turtles from Indonesia is happening at a scale much higher than annual quotas allow, according to a new paper. It estimated that turtle collectors supply traders in one province alone with tens of thousands of individuals annually, even though their quota is meant to be hundreds.

The study’s authors have called on the Convention on International Trade in Endangered Species of Wild Fauna and Flora (CITES) and the Indonesian government to take action against the illegal trade.

CITES is holding its 19th Conference of the Parties (CoP19) in Panama between 14 and 25 November. The decisions that the parties, meaning nation-states, make at the meeting will impact the conservation of hundreds of species.

Southeast Asian box turtles live in freshwater habitats across a number of Asian countries. They play an important part in the ecosystems they inhabit, such as ingesting and then dispersing seeds. The turtles also appear to be fairly adaptable to humans, meaning they could theoretically thrive in this human-dominated world.

However, people also commonly trade the turtles for their meat and other body parts, and as pets. The International Union for Conservation of Nature’s (IUCN) Red List assessment lists them as endangered, largely due to overexploitation.

The study, which MDPI‘s Diversity journal published, highlights the scale of the trade in these turtles in Indonesia. It pointed out that previous reports identified a vast, unregulated trade in Southeast Asian box turtles beginning around the mid-1990s. CITES began regulating the international trade in 2000 by adding the species to its Appendix II listings. CITES lists species in three appendices, depending on how at risk they are.

Since the CITES listing, Indonesia has set annual quotas for the amount of the turtles people can harvest from the wild. Most of Indonesia’s quota – around 90% – is destined for the international market, the study said.

CITES listings are supposed to ensure the international trade is conducted – and limited, where necessary – so as not to further endanger species. But in the case of the Southeast Asian box turtle, probes have found that a vast illegal trade is happening, largely in plain sight.

The Diversity study’s authors analysed trade in one of 32 provinces where the species lives to provide an illustration. Specifically, they looked into two out of five traders in Central Kalimantan. From 2019 onwards, Indonesia’s quota for the province has been 1,000 turtles, with the two traders allocated 400 of these between them. But the data suggests that collectors supply the traders with between 32,000 and 45,000 turtles a year.

Although data on supplies to the other three traders isn’t available, the authors asserted that their findings and other research shows that the illegal trade “continues unabated”.

The paper also suggested that the trade, when practised legally, supports the livelihoods of very few people. The two traders would, for example, secure profits of $400 annually if they stayed within their quota. The authors’ calculations suggested that the legal turtle trade can support around only 500 people across Indonesia.

The Canary contacted the Indonesian CITES authorities and the CITES secretariat for comment. Neither responded by the time of publication.

The study questioned how the vast illegal trade endures under the watch of the relevant authorities. As the Wildlife Conservation Society’s Susan Lieberman said in relation to turtle proposals on the table at COP19, an Appendix II listing is meant to “ensure exports are legal and sustainable” for turtle species, which are “one of the most severely threatened vertebrate groups”.

In the case of Southeast Asian box turtles, this clearly doesn’t appear to be the case.