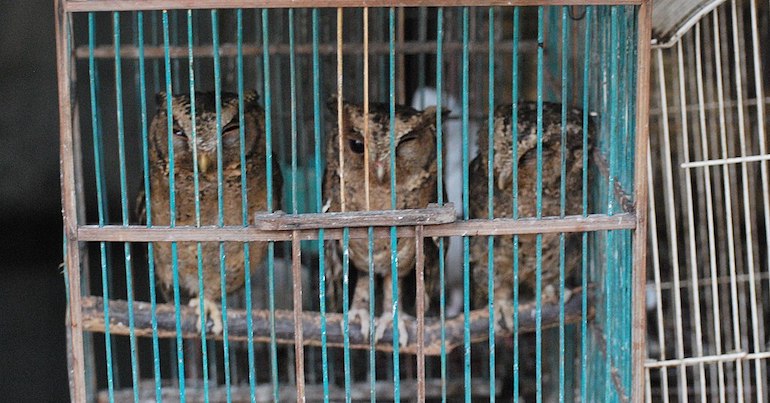 Alligators wrapped in plastic and stuffed into suitcases. Songbirds trapped in glue and then wedged into bamboo tubes. These are just two examples of the living nightmares wild animals face due to our species’ belief that it’s our right to trade in their lives.

The above instances relate to the illegal wildlife trade. This illicit trade, along with the thriving and often interlinked legal trade in wildlife, is the focus of a conference in Panama. The global wildlife trade body, known as the Convention on International Trade in Endangered Species of Wild Fauna and Flora (CITES), has its conference of the parties (COP19) from 14 to 25 November.

But the conference will only scratch the surface. The scale of international trade in wild lives is far, far greater than the reach of CITES, according to a study published in August. Co-author of the study Dr Chris Shepherd told the Canary, that “many species are being traded into extinction”. Shepherd is the executive director of Monitor, a conservation organisation focused on lesser-known species. He also said that when one species disappears, traders just move on to “the next available one”.

In other words, many of the world’s species are being “snuffed out, one after the other”.

Wildlife trade is “going through the roof”

As Our World in Data has highlighted, however, there are 2.13 million species on the planet. And those are just the ones that science knows about. So CITES’ listings only cover a fraction of the Earth’s species. Indeed, Shepherd pointed out that CITES lists fewer than 60 songbird species, despite there being thousands of them. He says that “hundreds” of these species are “threatened by trade and in need of conservation interventions”.

A study published in the journal Conservation Biology gives an indication of the scale of the trade in wild lives. It analysed US data on imports of living, wild-caught terrestrial vertebrate species. These include amphibians, reptiles, birds, and mammals. In particular, the study compared the scale of imports between 2009 and 2018 for species listed in CITES and those which aren’t.

It found that the trade in non CITES-listed species was extensive. The US imported 3.6 times more of these species than CITES-listed ones over the decade. The study identified 1,366 of the former compared to 378 of the latter. The total quantities of trade, meanwhile, were 11 times higher for non-listed species.

The US is a significant importer of wildlife. But Shepherd warned that the “shocking” volumes involved are:

typical of what’s happening in many places. The trade in live animals for exotic pets is going through the roof, it involves many hundreds of species and new species are appearing all the time in this trade.

Just because CITES doesn’t list these species doesn’t mean they’re not at risk. Based on assessments from the International Union for the Conservation of Nature (IUCN), the study found that of the 1,366 non-listed species subject to trade, 376 had known conservation threats.

Unfortunately for the species in question, it takes an average of 12 years for species to get a CITES listing after the IUCN’s Red List assessment identifies that they’re threatened by trade. The study also highlighted that, astonishingly, there is no systematic process in place for species deemed at risk from trade by the IUCN to be automatically considered for a CITES listing. This is despite the fact that CITES and the IUCN have a long history of close collaboration.

The study also found that there was inadequate information available about the population trends of 297 of the species imported into the US. The IUCN, meanwhile, hadn’t evaluated 139 of the species. Moreover, the study pointed out that the IUCN assessments for 40% and 35% of amphibians and reptiles, respectively, were dated to over a decade ago. Shepherd further highlighted that:

There are a number of species that are threatened by trade but trade isn’t even mentioned in the Red List assessments yet.

In other words, the wildlife trade could be damaging the chances for survival of countless species. But we simply don’t have enough information and assessments about their conservation status to know.

The information void is partly due to the lack of any international framework for monitoring trade in non-CITES-listed species. National efforts to monitor the trade are often inadequate too. Countries do keep import and export records, the study said, but their “scope and availability” varies. Moreover, there are few historical or publicly available records. Shepherd described the trade in non-CITES listed species as:

largely a free-for-all. There’s very little information out there on volumes, on trends, on potential declines over time – we’ve nothing to go on.

As Shepherd’s comments highlight, the wildlife trade and its lack of oversight is deeply problematic for the conservation of non-CITES-listed species. Empirical evidence points to this too, with studies showing that species subject to trade are more threatened with extinction than those that aren’t. One study indicated that this is particularly true for trading at national and international levels.

A threat to all living beings, including humans

The loss of biodiversity is a threat to all living beings, including humans. Wild species play a vital role in the ecosystems that we rely on for food, clean air, water, and more. The wildlife trade poses a further danger to human and other animal life. It carries a risk of spreading zoonotic diseases, meaning diseases that transfer between humans and other animals.

More than 70% of the emerging zoonoses which are currently defined originated in wildlife, according to a 2021 study. Covid-19 is an example of a zoonotic disease. The circumstantial evidence indicates that it originated in the wildlife trade. As Shepherd highlighted, different species are often brought together in the trade, such as in wildlife markets, with their various “parasites, viruses and disease”. These are extremely stressful circumstances for the individuals involved, and their health and welfare can be very poor. In other words, the situation is ripe for disease emergence and transfer. Indeed, Shepherd told the Canary:

For the sake of wild animals and people, authorities on every level need to arrange and implement meaningful oversight of the wildlife trade. This work should undoubtedly involve fixing CITES’ inadequacies as a regulatory body. These inefficiencies are evident in the allegations of illegality, corruption, and fraud over recent years.

Clearly, non-CITES-listed species need particular attention. Shepherd highlighted a number of actions that should happen in this regard. Firstly, the IUCN needs to carry out its assessments more regularly. Moreover, he said that when these assessments flag that trade is threatening a species, an alert system for CITES should be in place so the body can be “put to use in a positive way” by considering those species for addition to its listings.

CITES lists the species it oversees in three appendices, essentially depending on how at risk they are. The rules for the trade of species in the appendices differ accordingly. There appears to be a strong case for CITES to at least consider adding a number of currently unlisted species to Appendix II. This appendix covers species which aren’t necessarily threatened with extinction yet but need trade controls to avoid that outcome. Shepherd argued that it’s in “everyone’s interest” for CITES to list species in Appendix II, so that protection measures are timely. If species go straight into Appendix I – when they’re already at risk from extinction – then “everyone has failed”, he said.

Reverse listing for all species

The study also calls for all governments to “monitor and report on the trade of all wildlife”. CITES could be useful in this endeavour too, according to Shepherd. All CITES parties, meaning countries that are bound by the agreement, have to put management and scientific authorities in place for international trading. Monitor’s executive director said these authorities could be the “mechanism” for coordinating national monitoring and reporting.

Further options exist for better regulation of the trade in all species, including CITES listed ones. The trade could operate by what’s known as a reverse listing system. This would mean that all species are protected against trade by default, until someone, such as a trader, demonstrates that the trade can be sustainable.

As the Canary reported in 2019, reverse listing was one of three transformative measures that NGOs proposed for discussion at a previous CITES conference. The Australian NGO Nature Needs More has since developed these ideas and more into a detailed blueprint for reform of how the wildlife trading body operates. Critical to such reforms is the wholesale implementation of an electronic system for trading permits. It beggars belief for a multi-billion pound trade, but most CITES parties still use a paper-based system.

Reform of CITES and the global trading system won’t come easy, Shepherd stated. He highlighted that:

Governments and trade blocs themselves can be the barrier to progress on stronger protections for species from trade. As parties, nations hold the balance of power at CITES.

But Shepherd warned against inaction. CITES is “essential”, he argued, but it “has to be tightened up”. He told the Canary:

In the time I’ve been working in the wildlife trade, I’ve seen so many species just disappear. It’s tragic what’s happening.

If something isn’t done, we’re just going to keep losing species. With the world in the grips of an extinction crisis, more losses are something we can ill afford.