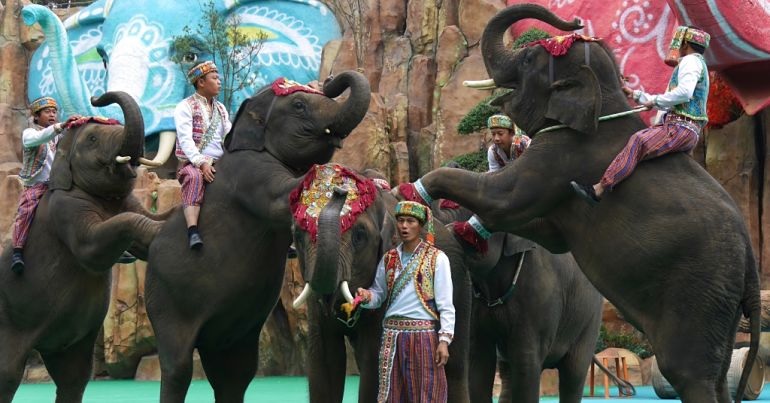 Elephants are going to be the talk of France in the coming days. The international wildlife trading body has a meeting there from 7 to 11 March, and it has a number of critical elephant-related issues it needs to address. One of them concerns allegations of the illegal trading of Asian elephants, an endangered species, between Laos and China.

Represented by the legal firm Advocates for Animals, filmmaker Karl Ammann raised a complaint about these trades over a year ago. He’s still waiting for a substantive response. The Convention on International Trade in Endangered Species of Wild Fauna and Flora (CITES) released its agenda ahead of the meeting, and it partially revealed how the body’s secretariat has been handling the matter with the accused.

The secretariat’s efforts so far do little to challenge Ammann’s characterisation of the body as a “toothless paper tiger”. Indeed, Advocates for Animals has written a letter to the secretariat, shared with The Canary, raising a number of concerns about progress on the complaint so far.

A catalogue of potential violations

As The Canary reported in January 2021, Ammann’s complaint alleged that elephant trades between Laos and China had been breaching CITES rules for years. The alleged violations included:

Ammann and his legal team provided a body of evidence to back up the allegations.

CITES is a global agreement between countries, known as parties, on the rules for trading in wildlife species in need of protection. The part of it with some muscle when it comes to handling trangressions is the standing committee. This committee, which is made up of parties representing different geographical regions, is at the helm in the meeting in France.

The agenda documents note that, as required, the secretariat has communicated with both China and Laos over the elephant trades.

It has probed Laos on its claim that the traded Asian elephants were captive-bred. Ammann asserted in his complaint that most Laos-born elephants have been fathered by wild males over the last decade. The complaint further claimed that Laos “does not have any CITES registered commercial breeding facilities”. Laos doesn’t appear to have provided the secretariat with any evidence to prove otherwise, so the latter has concluded that “there may be a “potential compliance matter” with respect to this.

In turn, any violation related to the mis-categorisation of the elephants as captive-bred impacts on China’s compliance with the convention. Not least because it has a duty to question imports of captive-bred species for which no licensed breeding operations exist.

Moreover, Asian elephants that aren’t captive-bred fall into a CITES category for species – Appendix I. This means importers cannot use them for primarily commercial purposes. Ammann’s complaint pointed out that many of the imported Laotian elephants ended up in commercial Chinese zoos and safari parks, where elephants perform regularly for visitors. The secretariat has also flagged this as a possible compliance matter.

Advocates for Animals wrote to the CITES secretariat ahead of the standing committee meeting. In its letter the law firm highlighted that Ammann is concerned the committee “may not have all the information it needs to be able to consider any further actions” in relation to the trades. It reminded the secretariat of the multitude of allegations laid out in the complaint, many of which didn’t feature in the agenda documents.

Moreover, the law firm highlighted an important apparent omission in the detail provided by the secretariat in the documents.

Alongside the issues of captive breeding and the commercial nature of trades, the secretariat says it has probed the fact that China’s import numbers and Laos’ export numbers for elephants don’t match. It notes that China reported 99 elephant imports from Laos between 2010 and 2018. The secretariat says that Laos and China have since “agreed that the correct number” is 87. But Laos’ reported export figures are missing around 50 elephants.

The secretariat itself mixes up dates and figures on this issue, using 2010-2018 and 2011-2018 variously as timeframes for apparently the same sales and putting Laos’ missing elephants at 50 in one document and 52 elephants in another.

Advocates for Animals’ key point is that the documents fail to mention that there is “a discrepancy between the number of recorded and unrecorded imports and exports”. In other words, the problem isn’t just that there’s a difference between what China and Laos have reported to CITES, but that some elephant trades don’t appear to have been reported at all. The letter states that Ammann is concerned that:

both Lao PDR and China may be knowingly underreporting the number of Asian elephants being translocated from Lao PDR to China, in particular, for use in wildlife shows.

As The Canary previously reported, a media report from Laos has claimed that the country exported 142 Asian elephants to China through one port – Mohan Port – since 2015. A further report by the Rescue Animals Project, which the complaint quoted, said that in 2014 there were 195 Asian elephants in 57 venues in China. The report asserted the number had increased by 140 to 335 Asian elephants, in 67 venues, by 2020.

The law firm has asked for the secretariat to confirm whether it will pass on the full complaint to the standing committee, along with its latest letter, for consideration. Notably, it has also asked whether the secretariat intends to recommend any action against China to the committee.

On the potential compliance matter regarding the commercial nature of the Chinese destinations for elephants, the secretariat plans to undertake a “verification mission”, including to facilities that ‘host’ the Asian elephants to get “a clearer understanding of the purpose of the transaction and the specific characteristics and objectives of the reported trade”.

Critically, the secretariat doesn’t recommend that the parties utilise arguably the most powerful tool in their compliance box: the “confiscation or return to the State of export” of any individuals traded in violation of the convention.

Parties are obliged to do this under the convention when violations occur, alongside ‘penalising’ related trade, such as suspensions. So why isn’t it among the secretariat’s recommendations?

Ammann argues it’s because CITES is not only a “paper tiger”, but a toothless one too, with “not even any paper teeth in the picture”. Ammann is not alone in that assessment. The EMS Foundation has also characterised CITES as a “paper tiger and active enabler of cruelty” over Namibia’s ongoing sales of wild African elephants. It flew 22 of them, including two young babies, to the UAE for a life in captivity on 4 March.

Namibia is carrying out these trades in full view of CITES and while the body is supposed to be actively investigating the very basis on which those trades are happening.

Ammann told The Canary that CITES used to be more muscular when it came to violations, publishing infraction reports and having a chief enforcement officer. But he says due to the body downgrading that post to enforcement advisor and other inadequacies, CITES has now “become a total joke”. Needless to say, it’s not a particularly funny one for the elephants involved.