Should we boycott the Qatar World Cup? - The Canary 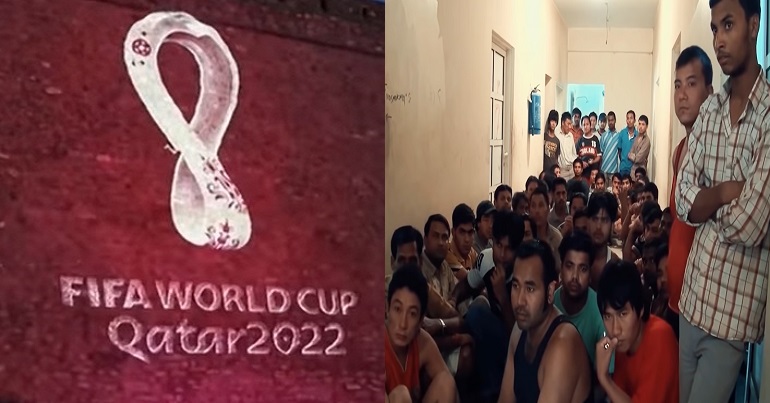 As Russia continues its onslaught against Ukraine, people in Russia are protesting and people in Ukraine are resisting. The latest UNHCR (UN refugee agency) data says over two million people have fled to neighbouring countries for safety. And the dominant international response, so far, has been economic sanctions against Russia and its oligarchs.

Additionally, various countries and organisations have imposed a sports and cultural boycott on Russia. These sanctions and boycotts began with remarkable speed given boycotts against other acts of brutality don’t seem to receive the same support.

The sporting boycott against Russia bans it from the football World Cup in Qatar this year. Russia is appealing that ban. But given the human rights, restrictions on freedom of expression and corruption concerns about the Qatar World Cup, banning any team from such a tournament could hardly be considered a punishment at all. Moreover, it highlights the unbridled hypocrisy of sanctioning one aggressor while letting others completely off the hook.

Qatar gets the World Cup despite controversy

When FIFA awarded Qatar the Word Cup in 2010, it was the surprise winner. It faced competition from South Korea, Japan, the USA, and Australia. And it was a somewhat controversial decision following allegations Qatar had bribed FIFA executives. Though, to be fair, Qatar is hardly the first country hosting a World Cup to be accused of that.

Additionally, the World Cup usually takes place in the middle of summer, when temperatures can reach 50 degrees celsius in Qatar. Accordingly, some thought this was too dangerous for supporters and players. So the tournament will now take place during the somewhat cooler four-week period from 21 November until 18 December.

Unfortunately, the controversy doesn’t end there. The employment system in Qatar has a particularly discriminatory impact on women. It exposes them to abuse and sexual violence. Qatar has even imprisoned women for the ‘crime’ of extramarital sex, when in fact the woman had been raped. Earlier this year Human Rights Watch released its 2021 report on Qatar. It found:

Women in Qatar continued to face severe discrimination and violence due to abusive male guardianship policies.

Women in Qatar must obtain permission from their male guardians to marry, study abroad on government scholarships, work in many government jobs, travel abroad until certain ages, and receive some forms of reproductive health care.

And possibly even more worryingly, while the law does prevent a husband from “physically or morally” hurting his wife:

Qatar has no law on domestic violence or measures to protect survivors and prosecute their abusers. No law explicitly prohibits corporal punishment of children either. Women can be forced to return to their families by the police if they leave their home, including when fleeing abuse. In January, a Yemeni woman was killed by her former Qatari husband outside a family court that had ruled in her favor in a dispute concerning their child.

There have also been other allegations of other human rights abuses related to the World Cup. And those allegations are in addition to reports of thousands of migrant worker deaths as they built the stadium and infrastructure. In 2019, when examining migrants workers’ rights in the lead up to the World Cup, Amnesty International reported:

While Qatar has finally begun a high-profile reform process promising to tackle widespread labour exploitation and ‘align its laws and practices with international labour standards’, workers still continue to be vulnerable to serious abuses including forced labour and restrictions on freedom of movement.

Up until recently, Qatar operated the Kafala system for migrant workers. The Institute of Policy Studies’ Thalif Deen called this system “modern day slavery”. This system binds each worker to the employer, who sponsors their visa, and gives the employer enormous power over the worker. This leaves “workers acutely vulnerable to abuse and exploitation”.

And while Qatar repealed many aspects of the Kafala system in 2020, “insidious elements” of it remain. Employers can still control migrant workers’ legal status and migrant workers don’t have full protection against “abusive sponsors”.

Amnesty’s 2020 report said Qatar had made progress in facilitating the freedom of movement and introducing a new minimum wage. In March 2021, the International Labour Organization confirmed Qatar had introduced a “new non-discriminatory minimum wage”. However, the Amnesty report also found “weak implementation and enforcement of other reforms introduced in recent years”. Which in turn:

left thousands of workers at the mercy of unscrupulous employers who have been allowed to commit abuses with impunity. Today, despite improvements to the legal framework, these migrants often still face delayed or unpaid wages, work excessively long hours, and struggle to access justice.

Qatar imposes discriminatory policies against its LGBTQIA+ community. According to the Human Rights Watch 2021 report:

Additionally, it has penalties of one and three years:

for any male who ‘instigates’ or ‘entices’ another male to ‘commit an act of sodomy or immorality.’ A penalty of ten years’ imprisonment…is also imposed on anyone who engages in consensual sexual relations with a person above sixteen, outside marriage, which could apply to consensual same-sex relations between women, men, or heterosexual partners.

While Qatar rejects a number of the allegations against it, some football fans in Europe said they’d boycott the tournament. In fact, a group of football fans in Germany decided to organise their own amateur football tournament at the same time as the World Cup. These fans said:

we don’t want to have any part of it. That’s not what sport should be about. So we thought, ‘let’s organise our own tournament over the same four weeks’.

Consistency is a minimum demand

So, if the international community is right to take this kind of action against Russia, surely it should be taking the same action at the same speed elsewhere against other nations or groups of people guilty of oppression? Instead, it appears as if it’s rewarding certain oppressors with arms deals, lucrative sporting competitions or by simply turning a blind eye. By taking action against one oppressor while rewarding or ignoring the other, the international community is sending a dangerous and contradictory message.