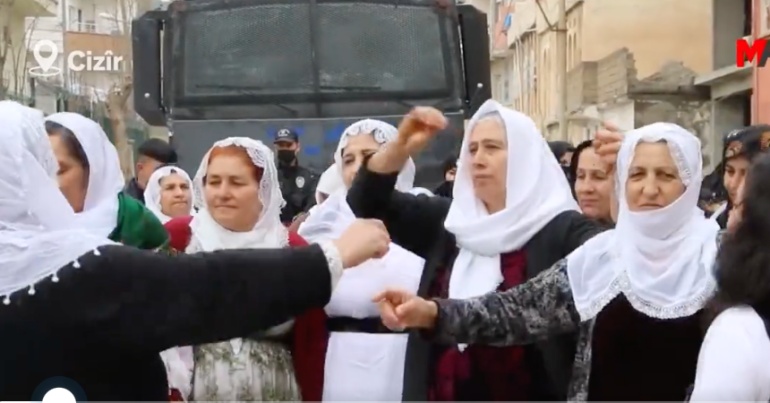 International Women’s Day is one of the focal points of the struggle for the Kurdistan Freedom Movement. Today supporters of the movement will be out on the streets across Kurdistan.

Women took to the streets in Bakur – the part of Kurdistan within the borders of Turkey – despite massive state repression. Kurdish woman Cahîda Dêrsim tweeted:

Against all odds and despite being encircled by #Turkish police and military a group of Kurdish women are celebrating the International Women’s Day #8March in front of the #HDP office in Şirnex’s #Cizîr district (@MAturkce) #TwitterKurds pic.twitter.com/GaqOsDeqyM

On the occasion of the International Women’s Day the #Kurdish Women’s Protection Units (#YPJ) published a footage with messages of their fighters on the 8th March. The Kurdish freedom movement draws its strength, motivation & will from the reality of the free woman #IWD2022 pic.twitter.com/VEKTjPfD0j

In Turkey, in the lead up to 8 March, the Turkish state has been laying the ground to further criminalise the movement.

Police also raided her home in Diyarbakir. She thankfully wasn't there. pic.twitter.com/0yyrfkKiN5

The left-wing, radically democratic People’s Democratic Party (HDP) is the third largest party in the Turkish parliament. The party practices the co-chair system, meaning that positions within the party and the movement are filled by two people, who must not be two men. The HDP has spearheaded the introduction of co-mayors in municipalities where the party has stood candidates in local elections (although in most cases HDP mayors have been replaced by state appointees loyal to president Recep Tayyip Erdoğan).

The arrests of Semra Güzel and Halide Türkoğlu are part of the ongoing repression of the People’s Democratic Party (HDP) by the Turkish state. They follow moves by the state to strip Güzel – together with many of her fellow HDP MPs – of their parliamentary immunity from prosecution.

Bodette tweeted about the events that led up to Güzel‘s arrest:

Part of the struggle for radical democracy in Turkey

Despite its role as an electoral party, the HDP is part of the struggle for radical democracy in Turkey. The HDP is not only anti-capitalist but part of a movement which critiques the concept of the state itself. This movement intends to move beyond nation states by encouraging the reliance on people’s directly democratic organising at the street or neighbourhood level, confederated across regions.

The three key concepts of the movement are women’s freedom, radical democracy and ecology.

The women of the HDP have already paid a heavy price for their commitment to radical politics. Leyla Güven – an ex-HDP MP and co-chair of the Democratic Society Congress (DTK) – was imprisoned for 22 years in 2020. The DTK is the umbrella body trying to bring about democratic confederalism in Bakur. The DTK itself has been criminalised by the Turkish state. HDP co-chair Figen Yuksekdag – who is one of the defendants currently on trial in Ankara – was originally arrested in 2016 and has been in prison ever since.

The TJA (Free Women’s Movement) – whose spokesperson Ayşe Gökkan was sentenced to 30 years imprisonment last year – highlighted the situation for women in Bakur:

The system is male dominant and that affects the cases. We have male friends and we are in the same struggle, but because the system is male dominant we’re accused of both being women and Kurdish while they are just accused of being Kurdish. That’s why it’s more difficult for women. The women’s punishment is always more than the men. The decisions are not equal with the law. They give [judgements] depending on the political situation. women are faced with lots of abuse, some faced with sexual abuse, torture, some other political intimidation. We have a friend who has been sentenced and faced with sexual abuse in prison.

The Union of Women’s Communards/Women’s Freedom Force released a statement to mark International Women’s Day. It seems fitting to end with their words:

Women, whose labour and bodies are exploited by men in homes, factories and schools, continue to stoke up the purple fire they have lit against male-state violence. In the meantime, the severe political-economic crisis of AKP-MHP [the ruling coalition in Turkey] fascism is continuing with various crackdowns against women. They pay the heaviest price of impoverishment as a result of the economic crisis

We have declared a war on patriarchal capitalism on all fronts! We have removed all the borders. We will continue the socialist feminist struggle with every method and tool in every field until we destroy the male-dominated world!