RMT is campaigning for a better deal for rail passengers - Canary 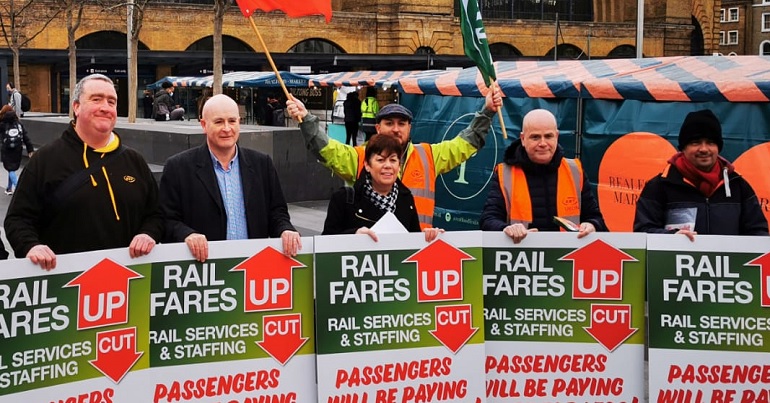 A trade union has been out in force campaigning over the raw deal train companies give passengers. It’s making noise about the fact that while companies put fares up, they’re cutting back staff and services. You could say that passengers are paying “more for less”, which is exactly what the union is claiming.

Rail fares up – shareholder’s money up

On Wednesday 9 March, the RMT Union was out at train stations across England. It’s been raising awareness about the state of the rail system. Specifically, the RMT has been highlighting the cost of tickets versus the service passengers actually receive:

You're paying #MoreForLess@RMTunion protest at Manchester Piccadilly this morning pic.twitter.com/AD29OLrPaP

Britain’s largest rail union @RMTunion is protesting today and warning of a significant threat to rail safety and services caused by plans to axe thousands of rail jobs.#MoreForLess pic.twitter.com/OnzyXA7Cj9

Usually, the government sets a formula to work out the yearly ticket price increases, which hit in January. This year it capped and delayed the rise because of soaring inflation. But despite this, the 3.8% rise was the biggest since 2013. Meanwhile, the RMT says train companies paid out over £2bn in dividends to shareholders. And at the same time, they’ve neglected staff and created chaotic services.

For example, in January the rail industry claimed the government had told it to cut 10% of spending to save money. The government denied this, but it seems that in some areas reductions in services due to the pandemic may become permanent. Meanwhile, RMT members are fighting for fair pay.

An outsourced cleaning company is making a real-terms cut to its staff’s pay. On 9 March, the RMT said another strike hitting a separate cleaning outsourcing company would also be going ahead – once again, over pay. In February, staff on the TransPennine Express service walked out over pay and conditions. On 7 March, reports emerged of “shambolic” services on South Western Railways.

But this kind of chaos is hardly unusual. Back in 2021, the government had to take the Southeastern train operator back into public control. The move came after the company failed to declare millions in taxpayer funding. The Southern Rail franchise saw years of laughable services coupled with passenger anger.

All this has resulted in public unhappiness with our rail system. Before the coronavirus (Covid-19) pandemic, Transport Focus reported on passenger satisfaction. It wrote in January 2019 that:

So, the RMT’s campaign is sorely needed. The privatisation of our rail network has not just failed workers. Companies’ perpetual chaos and focus on profits has made the system a disaster for passengers too.