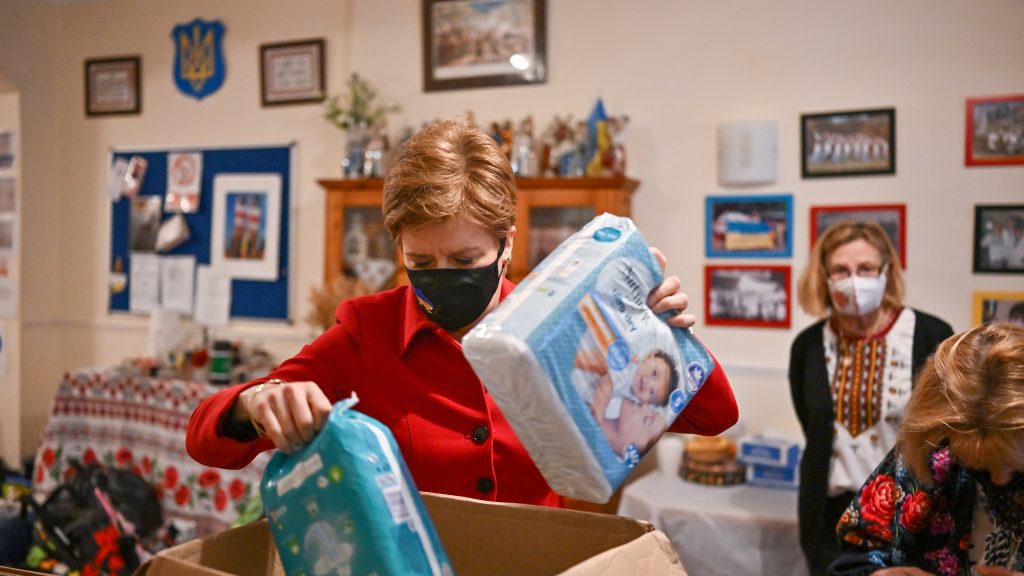 Nicola Sturgeon has branded the refugee situation for Ukrainians wanting sanctuary in the UK as “unconscionable and indefensible” and called for the UK government to remove the “wall of bureaucracy” they currently face.

Ukrainians fleeing the Russian invasion can enter the European Union without a visa and live there for three years, but if they want to come to the UK, they have to either have relatives here already and apply for a family visa, or have a British sponsor for their visa application.

Scotland’s first minister said her government is working with the Scottish Refugee Council to plan a “refugee programme” that would match people with accommodation and provide them with support. Sturgeon told the PA news agency that the UK government barriers some people currently face as “beyond unacceptable”, and added:

It’s unconscionable that the UK Government is making it so difficult.

Speaking during a visit to the Ukrainian Club to watch donations of food and supplies being packed, Sturgeon said that she had asked Michael Gove, the UK’s intergovernmental relations minister, to “open the doors” to Ukrainians and “get away from this unconscionable and indefensible situation where people are having to jump through bureaucratic hoops in order to get here”.

I’ve heard from one Ukrainian living here in Scotland right now about how a family member who has fled Ukraine, managed – after an arduous journey – to get to Poland and one of the things they’ve had to prove is that they were living in Ukraine before a certain date.

This person left with nothing. That is just beyond acceptable.

We’ve also put a proposition to the UK Government about how the Scottish Government, working with councils, the Refugee Council here, would effectively run a refugee programme, that we would match people with accommodation and provide the support.

The family route to that is open, which is the only route open right now for Ukrainians, (and) is proving horrendously bureaucratic.

The other route they hope to open is the community sponsorship route. It cannot be allowed to be mired in that bureaucracy.

But what we’re saying to the UK Government is make the requirements minimal, allow them to be done in this country, and allow the Scottish Government working with agencies here to deliver that on the ground.

UK transport secretary Grant Shapps said there were “lessons to be learned” in its response to the crisis which has seen more than two million people leave the country to escape the Russian invasion. Shapps said 760 visas have now been granted, with 22,000 applications “on their way through”. He told BBC Breakfast:

With 6,000 appointments a day available now, you should see the processing rate increase