XR target over 100 Barclays' branches in huge day of action 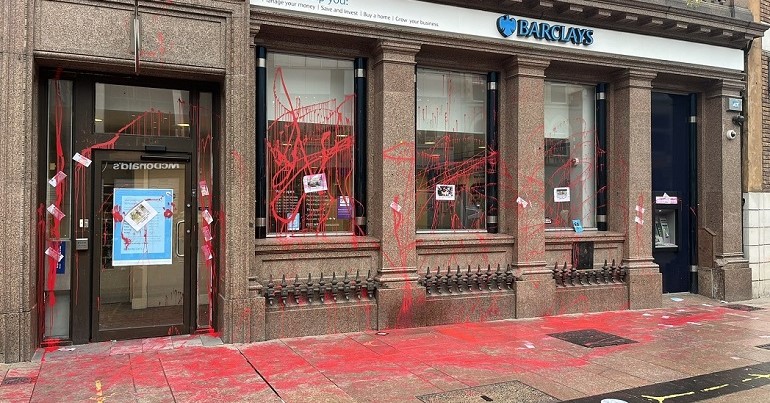 Extinction Rebellion (XR) protesters have targeted Barclays branches across the UK – a bank they describe as “Europe’s largest investor in new fossil fuels”. The group took 100 seperate actions against the bank, in around 50 locations across the UK. Just last year, the Guardian reported that Barclays had:

financed more in fossil fuel projects than any of the UK’s largest banks in the months leading up to the COP26 climate talks in Glasgow. 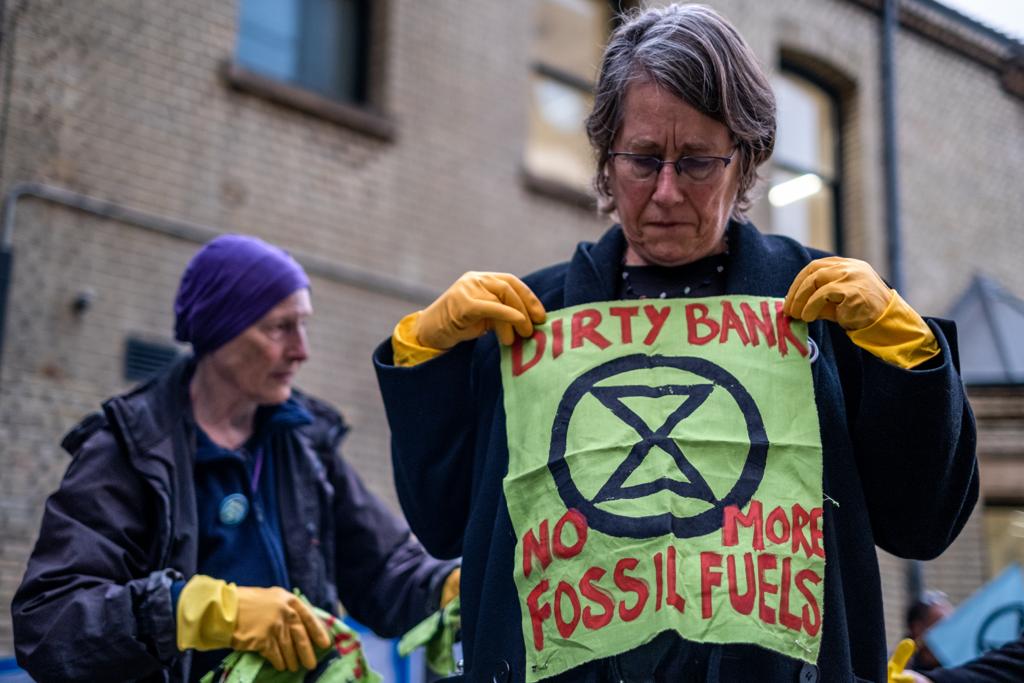 The flash mob were dancing while ‘cleaning up Barclays Bank greenwashing’ to draw attention to how complicit Barclays are in funding the fossil fuel giants. They sung: “Move, move, move your money; find a greener bank!” 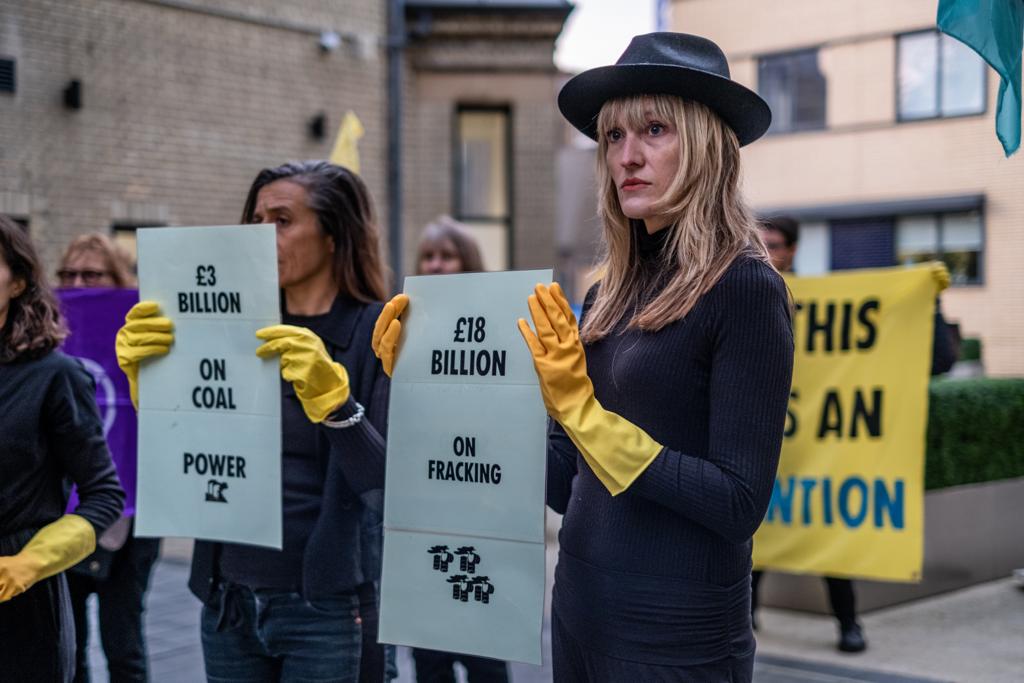 The protestors held signs explaining why people should stop banking with Barclays. XR showed that, in terms of fossil fuels, the banks’ track record was worse than its competitors like HSBC: 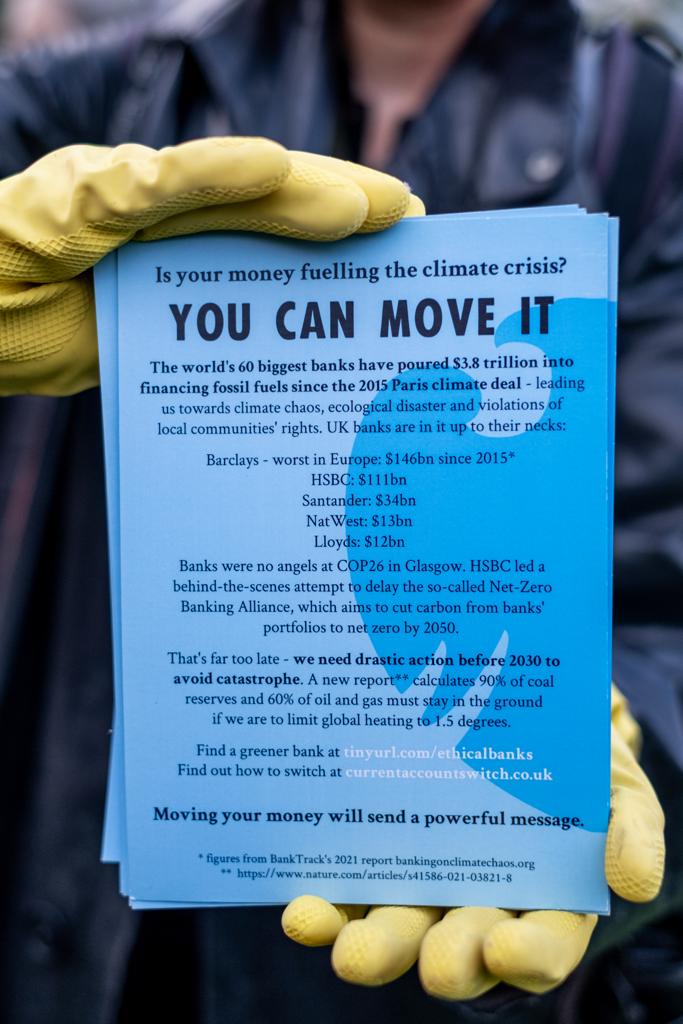 Scientists say keep the coal in the hole in order to stop global warming. Barclays are going against everything scientists are saying. We want people to switch their bank account away from Barclays to a greener bank. For example Nationwide’s current accounts emit five times less CO2 than Barclays and offer a £200 for switching.

Describing the bank as “Europe’s number one financiers of the climate crisis”, activist group Market Forces noted that:

Barclays wants you to think it’s responsible and climate-friendly.

But research from the influential Banking On Climate Chaos report shows that since 2015 (the year the Paris climate agreement was signed) and up to the end of 2021, Barclays has financed around US $167 billion in fossil fuels, making the bank the biggest financier of fossil fuels in Europe and the seventh-largest in the world. 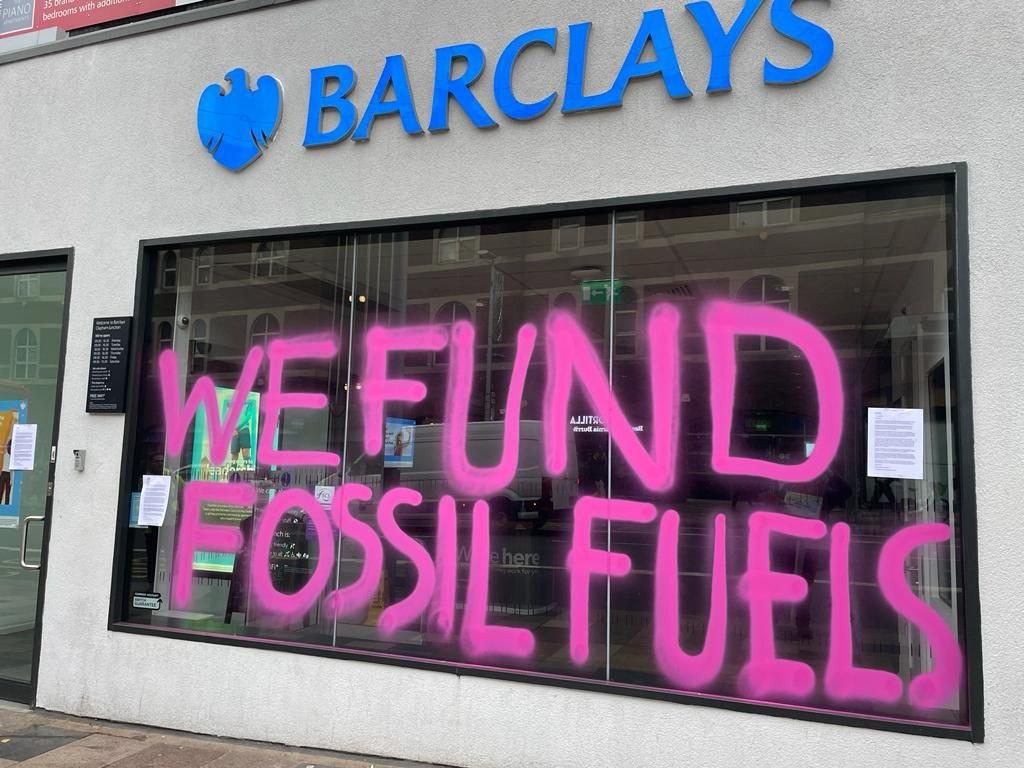 Barclays is an eager funder of some of the most polluting companies in the world. Since 2015, it has provided $2 billion for oil and gas drilling in the Arctic, one of the world’s most sensitive habitats. It is the seventh-largest global funder of tar sands and the biggest in Europe.

In the same time period it provided $29 billion for fracking, a process so environmentally destructive it is banned in the UK-headquartered bank’s home country.

XR UK shared images of protests from across the UK on its Facebook page. Campaign group Just Stop Oil supported the action: 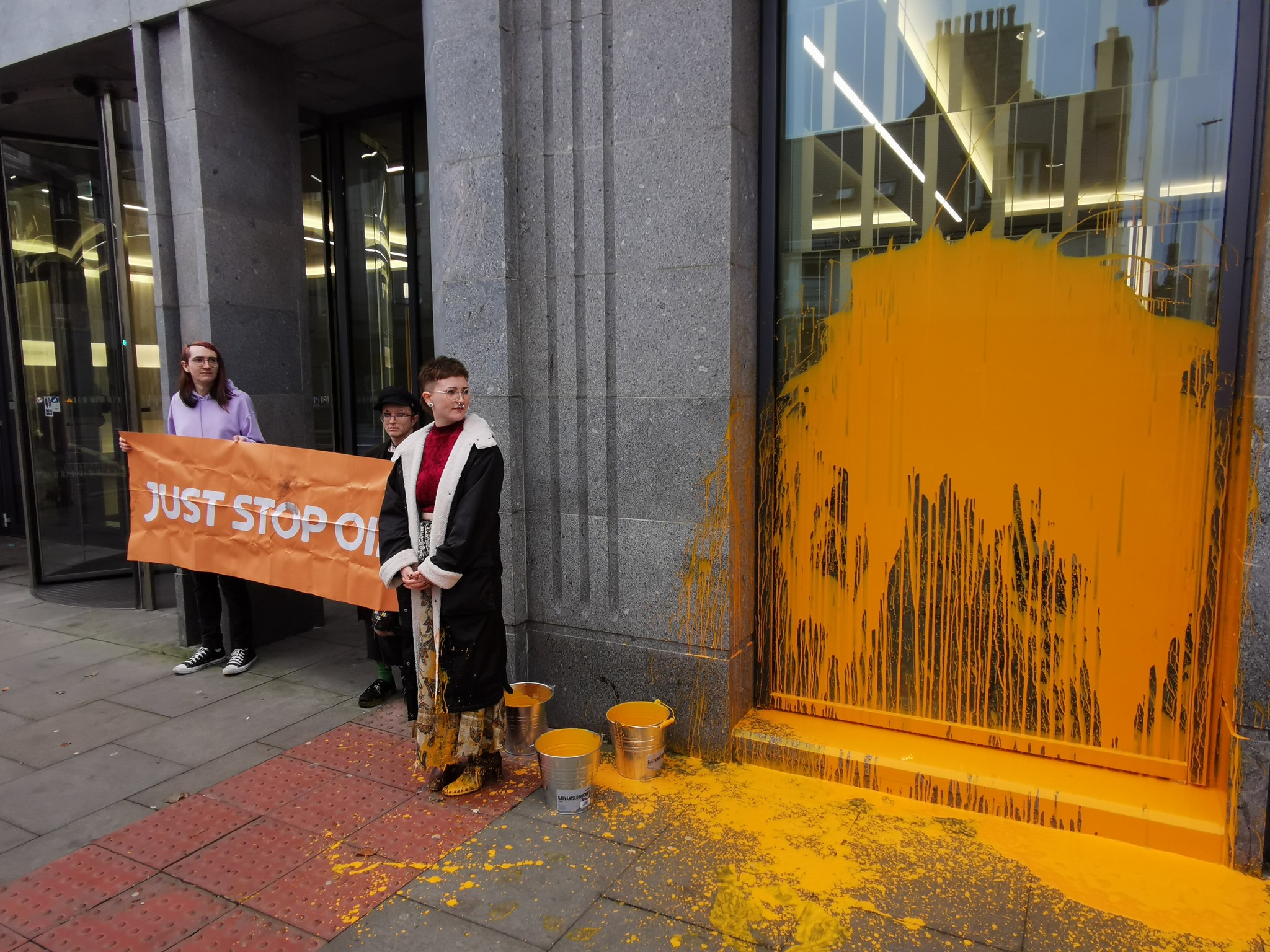 In Bristol, XR replaced corporate advertising billboards with its own posters: 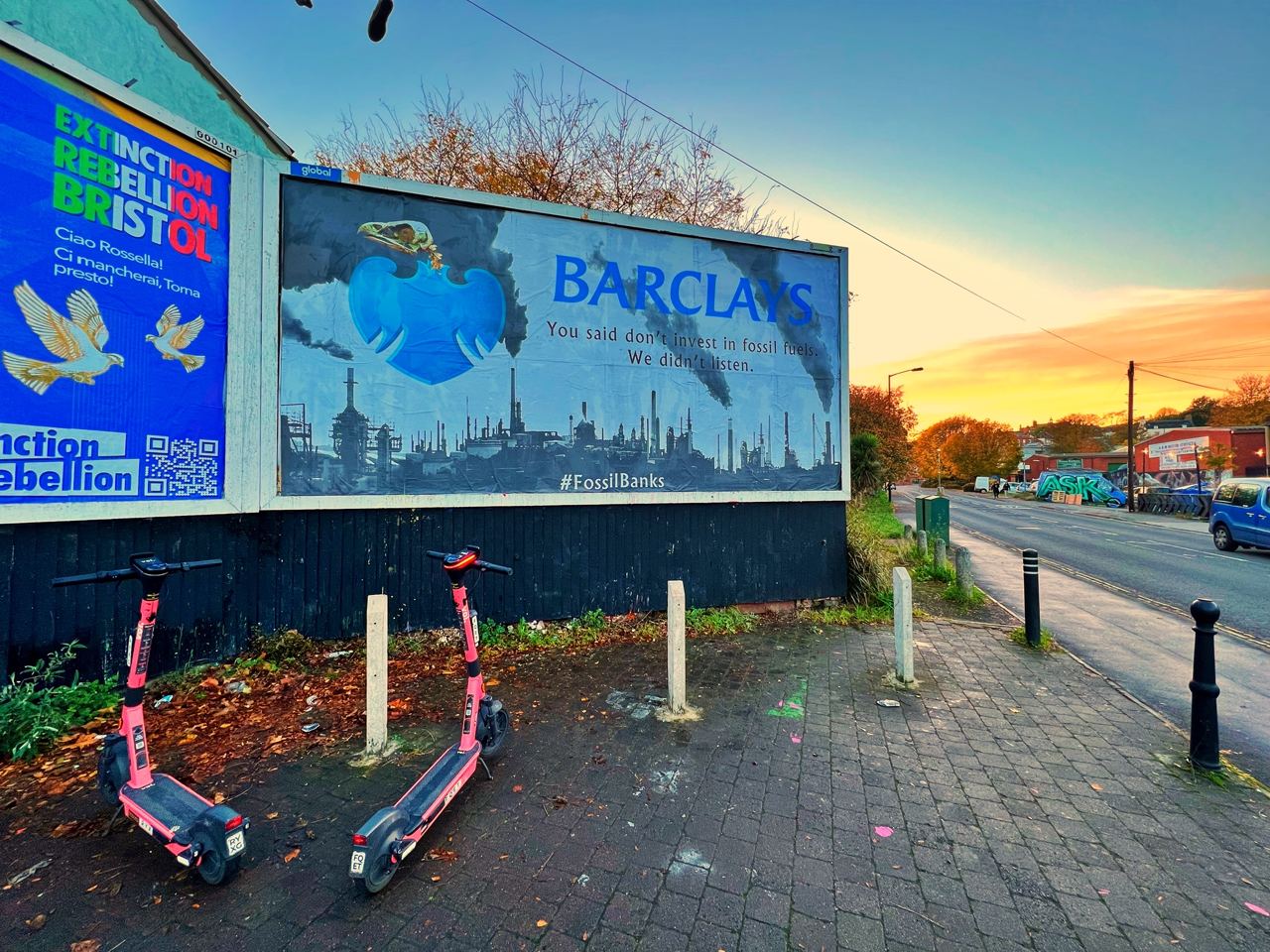 And of course, the group’s obligatory redecorations were performed: 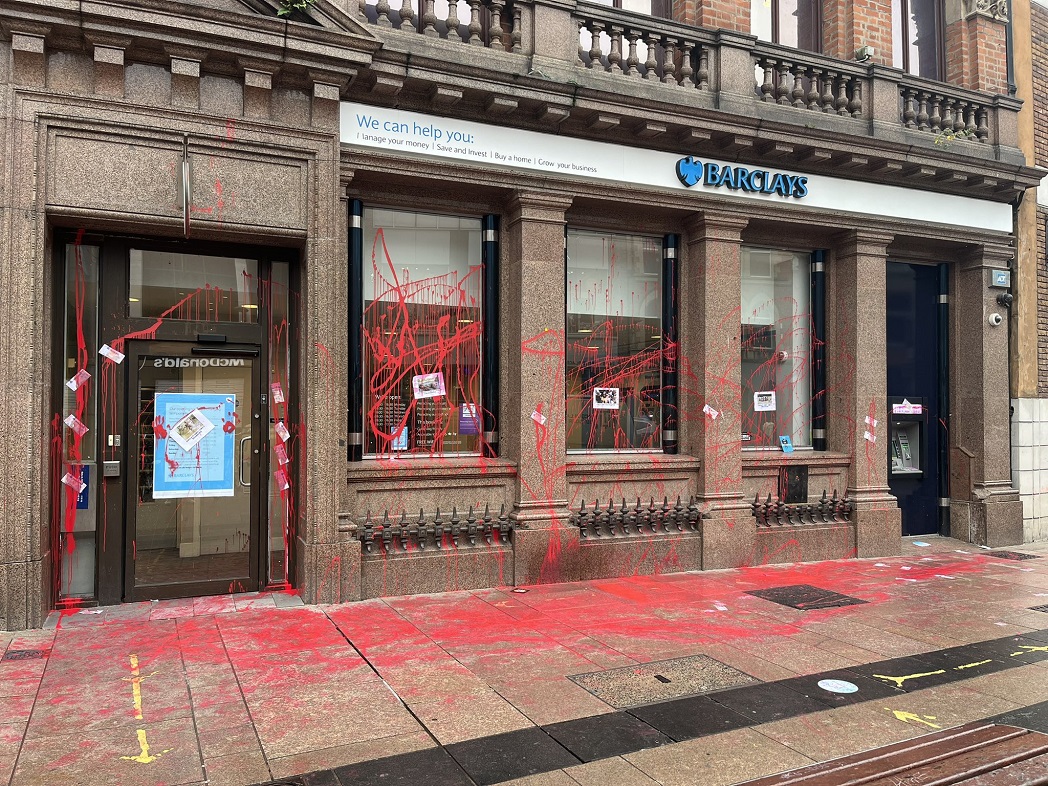 A press release from XR noted:

This April the United Nations reported that the World is on a “fast track” to disaster, and scientists warned it is “now or never” to limit warming to 1.5 degrees. This summer the UK recorded its hottest ever temperature, and there were three times more wildfires in 2022 than 2021. Just this week the UN secretary general, António Guterres, warned, “We are on a highway to climate hell with our foot still on the accelerator”.

It added that the local action forms part of a national campaign, with thousands of protestors gathering at 110 Barclays banks across the UK. The week-long protest follows Barclays’ announcement of much higher-than-expected pre-tax profits for nearly £2bn for the quarter. Higher interest rates have helped increase Barclays’ profits, whilst the cost of living over the same period has soared. Given the situation, XR is urging people to:

Move your money out of Barclays, be part of the solution.

The group will continue to target corporations that claim to be supporting climate action while in reality, they do the opposite. XR joins other groups like the Palestine Solidarity Campaign (PSC) in targeting Barclays – the latter doing so over the bank’s ties to arms manufacturers supplying Israel. So, there are countless reasons why people shouldn’t use this dirtiest of banks.