Braverman gives €72m to France so it can control UK borders 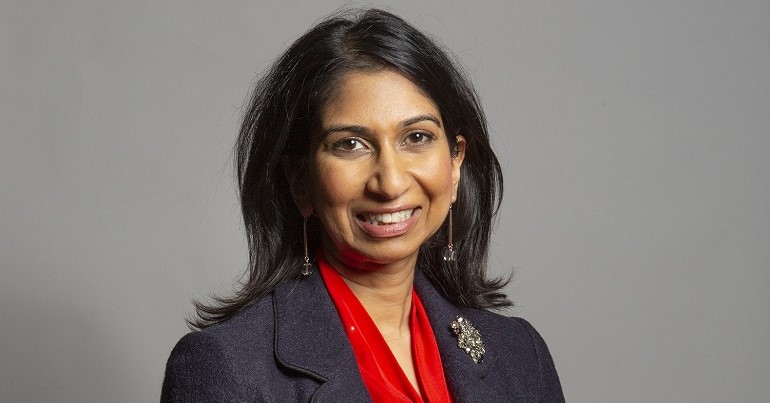 Far-right UK home secretary Suella Braverman has signed a deal with France over the refugee crisis. She has agreed to pay the French government €72m for it to put more police on the coast of northern France. However, the whole thing is preposterous – as people pointed out rather quickly.

As Agence France-Presse (AFP) reported, Britain has agreed to pay France another €72m to prevent refugee boats crossings the Channel. Both countries signed the new deal on Monday 14 November. Around 40,000 people – many of them Albanians, Iranians and Afghans – have crossed the Channel to England from France this year. AFP reported that the figure is well over 2021’s 28,561, which was a thousand-fold increase from 2018, when refugees first began sailing inflatables across one of the world’s busiest shipping channels.

The extra money will reportedly fund a 40% rise in the number of security forces patrolling France’s northern beaches, meaning an additional 350 people, the French interior ministry said. Teams of observers will be deployed on both sides of the Channel. Braverman, who has used far-right language like “invasion” when describing refugees, said of the deal:

There are no quick fixes, but this new arrangement will mean we can significantly increase the number of French gendarmes patrolling the beaches in northern France.

The arrangement means, for the first time, specialist UK officers will also be embedded with their French counterparts.

However, on social media people were quick to point out what a shambles it was.

Some pro-EU people were pointing out the irony:

Brexit: Taking back control of our borders by paying France £63mn to do it for us, in the same week we’re all told we’ll pay more tax.

All these efforts and numbers crossing the channel are still rising. This should clearly indicate our migration policies are not a deterrent, they’re just cruel https://t.co/hz4FFDWmMT

Other people pointed out that the anti-refugee UK government should just provide safe routes for people:

Surely it would be cheaper & kinder to provide a safe route?

The UK Refugee Council put out a thread on Twitter. It said:

The government’s deal with France on Channel crossings fails to address the factors behind why men women and children take dangerous journeys to reach the UK and so will do little to end the crossings.

A deal is needed that focuses on creating more safe routes such as family reunion and working with the EU and other countries to find global solutions to share responsibility for what is a global challenge as more people are displaced by war, terror and violence.

Critically this government should be doing far more to create a fair functioning asylum system so that there aren’t more than 120,000 people stuck in limbo waiting for years on end for a decision on their claim.

It also noted that the backlog of asylum claims had now hit over 122,000 people – with over 40,000 of them waiting between one and three years. Meanwhile, AFP reported that the French coastguard was rightly adamant that it cannot intercept boats once they are in the water. This is because attempting to do so could cause them to capsize. Over in the UK, former home secretary Priti Patel tried to institute an awful boat pushback policy – but failed.

The new deal between the UK and France will do nothing to stop people desperately trying to reach the UK. It is a preposterous waste of money which shows the far-right UK government cares not for people’s welfare and safety. It merely wants to maintain its own dogmatism.

Featured image via David Woolfall – Wikimedia, resized to 770×403 under license CC BY 3.0