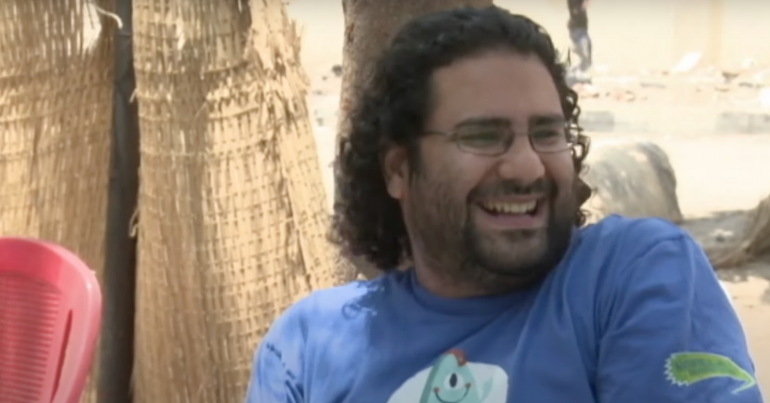 Jailed British-Egyptian activist Alaa Abdel Fattah has written that he is “doing well” and is taking liquids after fears rose for his health amid a months-long hunger strike, his family said on Monday 14 November.

Alaa Fattah, who escalated a seven months-long hunger strike to include water too as the COP27 climate summit opened on November 6, began taking water again on Saturday, according to a letter he wrote to his family. His sister Sanaa Seif said:

I’m so relieved. We just got a note from prison to my mother, Alaa is alive, he says he’s drinking water again as of November 12.

He says he’ll say more as soon as he can. It’s definitely his handwriting. Proof of life, at last. Why did they hold this back from us for two days?!

Such a small piece of paper means the whole world to us!

And how could they have this note written and dated Nov 12th and leave us worried??#FreeAlaa

Alaa Fattah, a key figure in the 2011 uprising that toppled longtime dictator Hosni Mubarak, is serving a five-year prison sentence for “spreading false news” by sharing a Facebook post about police brutality.

Sanaa, her sister Mona, her mother Laila Soueif, and her aunt – celebrated novelist Ahdaf Soueif – have campaigned worldwide for the release of Alaa.

Sanaa said in an interview with Agence France-Presse (AFP):

We need sensible people to intervene. I put my hopes in the British delegation because as his sister, I can’t give up or tell myself that my brother will die…I want to remind both Egyptian and British officials that my presence means that someone is dying and that it’s possible to save him.

In recent days his family said they fear for his life. They’ve already made appeals to the international community and to Britain in particular. Alaa gained citizenship this year from behind bars through his British-born mother.

Some world leaders have raised his case with Egyptian president Abdel Fattah al-Sisi during the climate talks.

The detained activist’s lawyer, Khaled Ali, a former presidential candidate, was denied access when attempting to visit Alaa on Thursday and again on Sunday, despite saying he had been issued with the necessary permits.

On Monday, he returned for a third time to Wadi al-Natroun prison, about 100 kilometres (60 miles) northwest of Cairo, accompanied by Alaa’s mother Laila Soueif. Prison authorities handed over a letter from Alaa to his family.

After 3 hours, Khaled Ali and Laila are still at the gate of Wadi el-Natron prison waiting for Alaa to be allowed a visit from his lawyer. Every inch, and then some. #FreeAlaa #FreeThemAll

A Twitter account campaigning for Alaa’s release celebrated the proof of life, but urged that more must be done:

Proof of Life after *14 days* of Alaa being held incommunicado by the Egyptian regime: 14 days of psychological torture for his family. This needs to end NOW with consular access for the British Embassy and his immediate release. #FreeAlaa #FreeThemAll https://t.co/e5bhDn6sS5

Alaa’s continued imprisonment is a threat to freedom of speech and democracy. Speaking out against police brutality shouldn’t result in a jail sentence, and the longer the British government choose to do nothing, the longer this injustice continues.