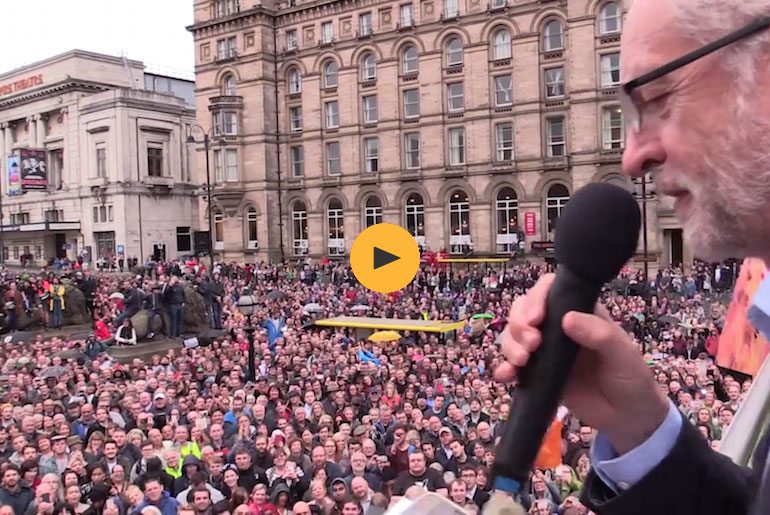 Thousands of people braved the rain to hear Jeremy Corbyn speak in Liverpool, in huge contrast to the small number of supporters Owen Smith attracted just days before.

Estimates put the crowd at somewhere between 5,000 and 10,000 people – numbers it is hard to imagine any political leader of modern times attracting on a wet night. It was the largest turnout the Labour leader has seen for any of his rallies, with police forced to close roads in the area due to the numbers attending.

#Breathtaking The most accurate video footage of the true size of Liverpool Crowd for Corbyn tonight. https://t.co/9Wm6m5jUzW #MerseyBunker

I was honoured to speak at this rally in Liverpool – a city with a proud history of standing up for justicehttps://t.co/L1wLXB3OMp

Addressing the crowd, Corbyn made it clear that he saw the leadership battle as addressing the elite rule that currently exists in politics, and the need to change it for ordinary people to feel represented:

Corbyn also stated that he didn’t see the leadership battle as a “distraction”, but as “a massive opportunity to reach out to people all across this country”.

His opponent, Owen Smith, is also trying “to reach out to people across the country”, but it appears the people are not responding in the same way. In tweets Smith appears to have subsequently deleted, he addressed a crowd of what could not have been more than a few hundred people in Liverpool at the weekend.

But Twitter users estimated the crowd was even smaller than claimed:

And this is where there is ultimately a real problem for the Labour challenger. The coup plotters can talk all they like about “strong leadership”, but questions have to be asked about whether a strong leader gets a handful of people to listen to him or many thousands.

Then there’s the kind of dismissive sneering which occurs – that these aren’t the core of the people the Labour party needs to reach, that they are unrepresentative of the majority of people who the party needs to mobilise. But no-one is taking the time to speak to these people; people who feel that after decades of elite rule there is finally a political leader who is talking with them about the things which matter and who is not veiling his language in spin and deceit. A leader who is able to get people out on the streets to hear him talk.

The scenes in Liverpool are incredibly powerful, and very moving. It’s hard to mobilise a lot of people for any political cause – especially at two days notice, but the fact that so many thousands were willing to come out to support and listen to Corbyn should give us all hope that something in politics is changing.

It should also be giving Smith and other parliamentary coup plotters sleepless nights.