In a historic first, Senate votes to end US military involvement in Yemen - Canary 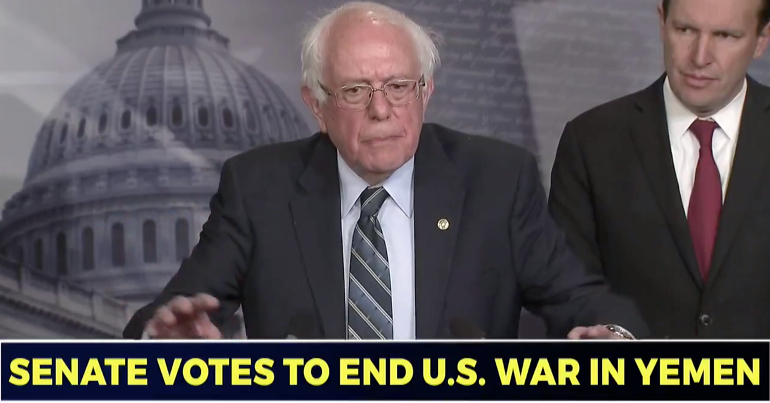 The war in Yemen has been raging for years, with US support. But now, for the first time in history, the US Senate has voted to end this unauthorized military engagement.

On 13 December, US senators from both major parties voted to end US support for the devastating Saudi-led war against Yemen. The resolution passed by 56 to 41.

According to the Center for Strategic and International Studies:

Since 2015, the United States has provided intelligence, military advice, and logistical support to the Saudi Arabia–led military intervention in Yemen.

The exact effect the vote will have on the conflict is difficult to know. But this extraordinary move is undoubtedly a major step in the right direction.

Independent senator Bernie Sanders was one of the main sponsors (initiators) of the proposal. Speaking to reporters after the vote, he said:

It’s a very important breakthrough. Both progressives and conservatives have made a profound statement that, 45 years after the passage of the War Powers Act – 45 years later – finally, the United States Senate has come together to use that authority for the first time and say that: ‘the responsibility for war, the constitutional responsibility for war, rests with the United States Congress, not the President, whether that president is a Democrat or a Republican.’

Once in a while, with persistent prodding and shaming, the U.S. Senate rises to the moment.

Final vote on the Lee/Sanders/Murphy resolution to pull America out of the immoral, disastrous Yemen war: 56-41.

And Republican Rob Portman (who co-sponsored the proposal with Sanders and another Republican senator, Bob Corker) said:

The legislation I co-sponsored with @SenBobCorker has passed the #Senate. We support bringing an end to the conflict in Yemen, and holding the Saudi Arabia government accountable for its actions https://t.co/V1hFu4VVAZ

This bipartisan support for ending US involvement in a foreign entanglement is particularly encouraging. For too long, the Republican Party (along with many in the Democratic Party) has reflexively supported traditional allies like Saudi Arabia and US military intervention without question.

But that was not all there was to celebrate. Because on the same day, the Senate also passed another resolution (also sponsored by Republican Bob Corker) that placed the responsibility for the murder of Saudi journalist Jamal Khashoggi on the shoulders of Saudi Crown Prince Mohammed bin Salman. And for this bill, the vote was unanimous:

The Trump administration under pressure over Saudi Arabia

The Saudi-led bombing campaign began in 2015 and has led the way in creating one of the world’s most bloody and brutal conflicts today. At least 10,000 have been killed during hostilities, including significant numbers of civilians, with around 40,000 casualties overall. Several tens of thousands more are believed to have died of starvation following famine and displacement. The situation has since degenerated into a humanitarian crisis in which eight million people are now on “the brink of famine”; and the UN has warned this may rise to over 12 million.

The US intervened shortly after the campaign began, in support of its long-time ally Saudi Arabia and against Houthi fighters (who the US believes to be receiving Iranian support).

Donald Trump and his administration have been stubbornly supporting Saudi Arabia – in spite of the destruction of Yemen and in spite of the murder of Jamal Khashoggi. But the events of 13 December show that even some Republicans are questioning US alliances and foreign military engagements. Clearly, in Congress at least, Washington’s unbending allegiance to Saudi Arabia is no more.

Hopefully, this will now translate to an improvement of the situation on the ground in Yemen. Because without US support, Saudi Arabia might rethink its position and move to de-escalate hostilities. And the Senate’s resolution essentially demands that it does.