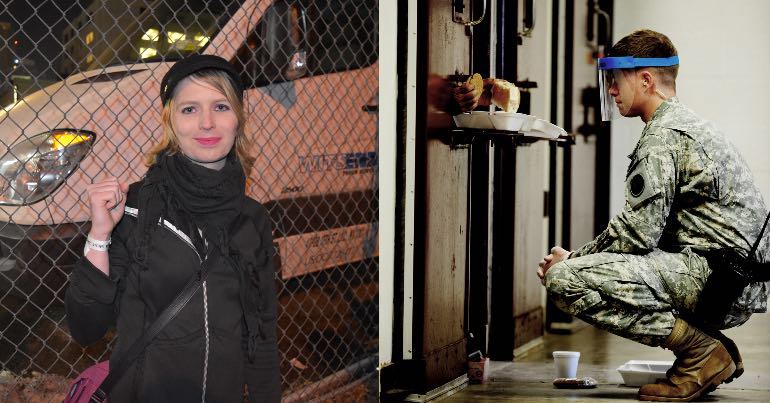 The US government is again holding Chelsea Manning in solitary confinement. The information comes from a statement released by her support group, Chelsea Resists, on 23 March. It said that the government is holding Manning in a cell for up to 22 hours a day. On 8 March, a judge found Manning in contempt for refusing to testify in front of a grand jury about WikiLeaks and Julian Assange. The US government previously imprisoned her for nearly seven years for leaking documents to WikiLeaks.

According to her support group, Manning is being held in “administrative segregation” by the prison authorities. This is a term they have “designed to sound less cruel than ‘solitary confinement’”, Chelsea Resists said, but it declares:

This treatment qualifies as Solitary Confinement

It relies on Juan Mendez’s definition of solitary confinement. He is the United Nations Special Rapporteur on Torture. Mendez says:

I have defined prolonged solitary confinement as any period in excess of 15 days. This definition reflects the fact that most of the scientific literature shows that, after 15 days, certain changes in brain functions occur and the harmful psychological effects of isolation can become irreversible.

Manning was previously held in solitary confinement from 2010 to 2011.

Manning’s support group also describes her living conditions in detail. She is unable to talk to other prisoners because she cannot leave her cell when other prisoners are out. As a result, she also cannot go to the law library. And she therefore “has no access to books or reading material”. Chelsea Resists points out that:

She has not been outside for 16 days. She is permitted to make phone calls and move about outside her cell between 1 and 3 a.m

Manning has also become ill during her detention. And although she has received medical treatment, Chelsea Resists says:

keeping her under these conditions for over 15 days amounts to torture, possibly in an attempt to coerce her into compliance with the grand jury.

Standing up to the grand jury

In spite of this, Chelsea Resists also says Manning will continue to take a stand against the grand jury. It said she will not cooperate with it:

Chelsea is a principled person, and she has made clear that while this kind of treatment will harm her, and will almost certainly leave lasting scars, it will never make her change her mind about cooperating with the grand jury.

But the group has still called on the prison to “remove Chelsea from ‘Administrative Segregation'”. The US government will keep Manning locked up until she either cooperates with the grand jury or it finishes its work. As a result, she could remain in detention for 18 months.