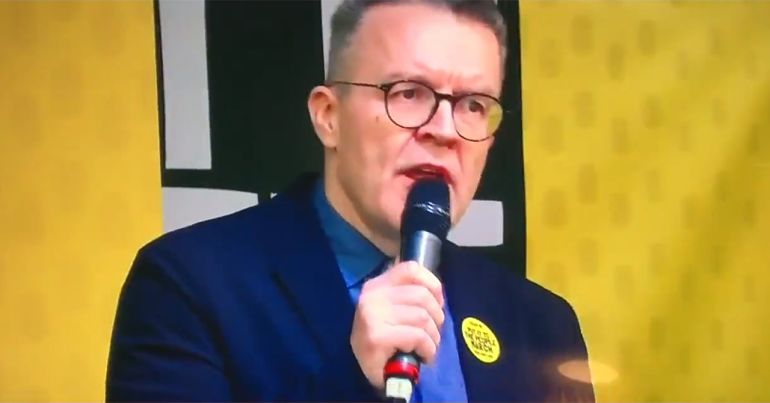 In fact, it was difficult to hear him. Watson was trying to articulate his position that he would vote for Theresa May’s Brexit deal if she puts it to a referendum afterwards:

What’s that Tom hay hay can’t hear you over the boos 😂😂 pic.twitter.com/794DawI2EE

It appears many progressives have had enough of Watson. In September 2018, Corbyn ally and Labour frontbencher Clive Lewis summed it up:

Elements of our Parliamentary Labour Party have spent the past three years in effect operating a scorched earth policy. They’re trashing the brand. And I think after three years of trying… to undermine… a twice democratically elected leader some members are at the end of their tether.

And recently, the Labour right wing’s attempts to undermine Corbyn have only got worse. On 1 March, one Labour supporter made his thoughts about Watson clear. The MP for West Bromwich East was hosting his LBC show when Lee from Swindon phoned up and said:

You are, right now, sitting… on a revolution that could transform this country for the better. And people like yourself all you do is spend your time killing the Labour party from within. How dare you?

When George Osborne got booed by thousands at the London Olympics I thought I'd never see another politician so rounded on by the public, congratulations to Tom Watson on surpassing that record yesterday. Quite an accolade…

Having a shit birthday

It is right and good to boo Tom Watson

The Corbyn-led movement is trying to end almost 40 years of a failed Thatcherite consensus. Across Britain, austerity is holding back the majority of people. This has intensified since the financial crisis of 2008 as elites have been forcing us to pay to prop up their rigged economy. Yet Watson seems to think he’s the star of The West Wing and tries to destroy the Corbyn project at every turn. The crowd was totally right to send him a message at the Remain march.