Ignore the critics. Here's why Jeremy Corbyn was in Morecambe on Saturday. - Canary 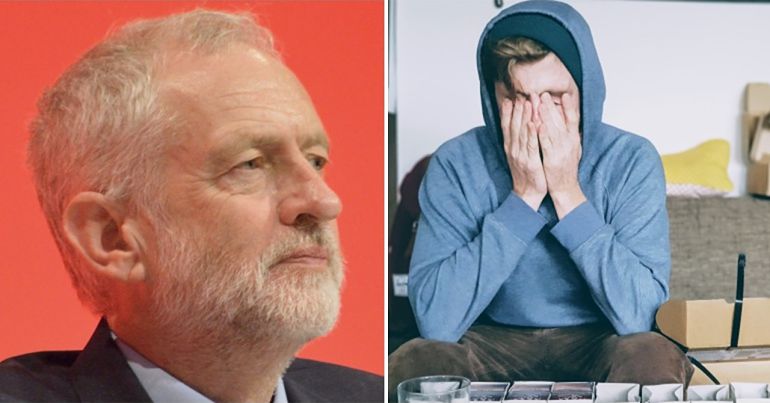 On 23 March, it’s estimated that around a million people marched in London to call for a second Brexit vote. Jeremy Corbyn didn’t attend. But despite criticism and questions in the media, there’s a very good reason for this. Because Corbyn went to Morecambe. And there, he was highlighting the devastating impact of Conservative-led austerity in one of the most deprived parts of the UK.

As Brexit chaos continues to dominate headlines, there’s still no clear idea about if, when and how the UK will leave the EU. But in the midst of this confusion, the facts of austerity don’t change.

Morecambe Bay, in Lancashire, is among the “worst 10% of areas in the Index of Multiple Deprivation”. One part is in the worst 5%.

In 2017, an ITV investigation found that teachers regularly report children “going to school hungry and in uniforms that haven’t been washed”. Doctors in the area reported evidence of diseases “like rickets and others linked to malnourishment”.

In 2018, the New York Times also focused on Morecambe to highlight the ongoing impact of austerity. It reported that one teacher regularly found a child rooting through rubbish bins to find food. In the same school, “roughly one in three” children had nothing to eat before school. Another parent in the area:

skipped meals to ensure that his son ate three times a day. But he could no longer afford to give the boy a balanced diet or a new school uniform, or take him to see friends.

It also reported that “the rising number of hungry children at Morecambe Bay coincided with sharp reductions in welfare benefits associated with the clumsy introduction of a new welfare program [Universal Credit]”.

This is where Corbyn was on Saturday.

So although members of the Independent Group (TIG) and some marchers questioned Corbyn’s absence from the demo, they missed a vital point. If the Conservatives remain in power, the number of hungry children in areas like Morecambe will only continue to rise. As the Child Poverty Action Group (CPAG) has noted:

Corbyn’s visit came ahead of local elections in May. Whilst there:

He joined local Labour candidates in launching their manifesto… with pledges to tackle poverty, act on climate change and invest in housing.

In Morecambe listening to people as Labour launches our local elections campaign.

Like Labour councils across the country, despite crippling Tory cuts, Lancaster City Council has stood up for this community and the services people rely on. #LabourDoorstep #RebuildingBritain pic.twitter.com/JObAOmBdSU

And while Brexit chaos continues, Corbyn still leads a strong manifesto-backed promise that keeps all options on the table. But the biggest goal is to challenge Theresa May’s botched deal and avoid no deal:

To those considering chanting ‘where's Jeremy Corbyn at today's #PeoplesVoteMarch:

Corbyn has opposed May’s deal from the start.

Corbyn is backing a public vote on the deal.

Corbyn hasn’t ruled out revoking Article 50 to stop no deal.

He is giving your cause a lifeline.

In 2018, Philip Alston – the UN special rapporteur on extreme poverty – made it very clear that Brexit will affect the poorest people the most. He was highly critical of the current Conservative-led government, saying it was clear to him that “the impact of Brexit on people in poverty is an afterthought”.

Corbyn was in Morecambe because, if the Conservatives remain in power, austerity will destroy more lives and more children will go hungry. It really is that simple.