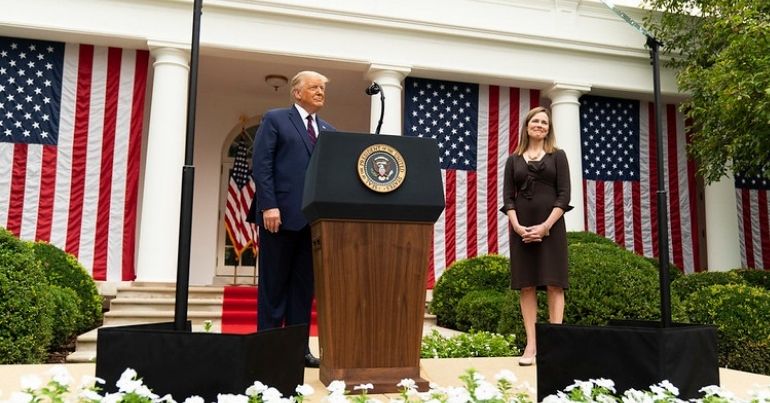 Amy Coney Barrett has been confirmed as a Supreme Court justice, marking a notable shift to the right for the US’s ultimate judiciary.

Coney Barrett was sworn in as an associate justice of the Supreme Court on 26 October. All Democratic senators voted against her nomination, while all Republican senators voted for it apart from one.

Republican senator Susan Collins voted against Coney Barrett’s appointment, citing concerns that the process had not been fair. Despite this, Coney Barrett was confirmed with a 52-48 split.

More than 60 million Americans have already voted. They deserve to have their voices heard on who replaces Justice Ginsburg.

Trump announced his nomination of Coney Barrett on 26 September, after the death of Ruth Bader Ginsburg.

In 2016, Republicans refused to consider Barack Obama’s nomination of Merrick Garland to replace Antonin Scalia due to him being in the last year of his term as president.

After calls of hypocrisy, Senate majority leader Mitch McConnell maintained that Republicans having a majority in the Senate meant that Trump was able to make a nomination at the end of his term. The Democrats did not control the Senate in 2016.

Two Republican senators said the nomination was unfair, calling for it to be postponed until after the election.

In fairness to the American people, who will either be re-electing the president or selecting a new one, the decision on a lifetime appointment to the Supreme Court should be made by the President who is elected on November 3rd.

The Supreme Court has final jurisdiction over federal court cases in the US, as well as state court cases that involve federal law.

It also has the power of judicial review, by which the court can invalidate statutes or presidential directives if they are judged to violate the US constitution.

There are nine Supreme Court justices. They serve for life, and each has one vote on a case.

Trump has had the opportunity to nominate three Supreme Court justices during his presidency. As well as Coney Barrett, he nominated Neil Gorsuch in 2017 and Brett Kavanaugh in 2018.

Coney Barrett is Catholic, and has been a staunch conservative throughout her legal career.

In 2006, she signed a newspaper advertisement calling for the overturn of Roe v Wade. Roe v Wade was a 1973 landmark ruling from the Supreme Court that allowed women in the US to decide to have an abortion.

During Coney Barrett’s confirmation hearing she was asked whether Roe v Wade should be reversed. She said that she does not consider Roe v Wade to be a ‘super-precedent’ due to challenges to it remaining.

Similarly, in 2015 she signed a letter to Catholic bishops asserting that marriage is defined as being between “a man and a woman”.

seems to be intent on undoing all the things that Ginsberg did.

He added that her nomination risked:

Just about everything that America believes in and stands for when it comes to issues like health care, labor rights and LGBTQ rights and women’s rights.

With the conservative Supreme Court majority, Republicans will have an advantage when deciding legislation on issues like LGBTQI+ rights, abortion, and climate policy.

This appointment only adds to the quick accumulation of right-wing judges Trump has appointed. As of July, he had appointed 194 judges, including more appeals judges in his first term than any president since Jimmy Carter.

These judges have already influenced the rightward slide of American law. Increasing control may leave conservatives to block any future democratic legislation even if the Democrats have a majority in congress.

Avenues for the democrats

The oldest Republican-nominated justice is Clarence Thomas, at 72. Whether Biden or Trump is elected on 3 November, it could be a long time before another justice is replaced.

This has led to several democrats, including Alexandria Ocasio-Cortez, calling for the expansion of the Supreme Court. This is what is known as ‘packing the court’. It was last attempted by Franklin D. Roosevelt in 1937.

Despite having previously voiced his opposition to the idea of packing the court, Biden has since said he would examine court reforms.