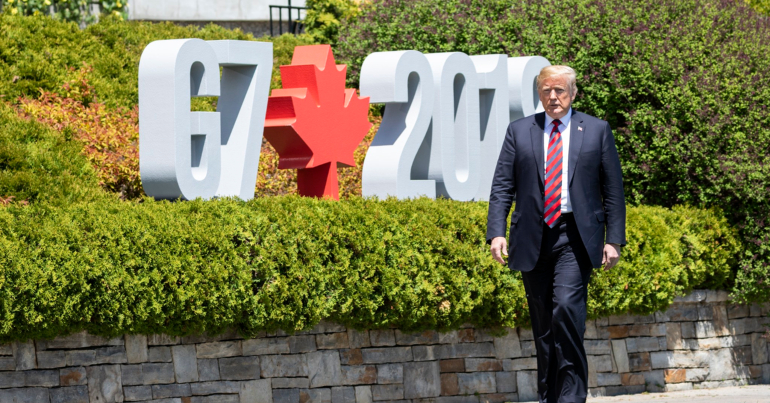 As the G7 summit in Canada drew to a close on 9 June, US president Donald Trump seemed to make a complete about-face. Though a long-time critic of free trade, which he says has caused great harm to the United States, he demanded that other G7 members drop all trade barriers to US goods. Otherwise, he would unilaterally end all trade with them. Trump described tariffs on US goods as “ridiculous and unfair,” and said that “it’s going to stop — or we’ll stop trading with them.”

Canadians, we’re polite, we’re reasonable, but we also will not be pushed around.

UK prime minister Theresa May paid “tribute” to Trudeau on 11 June “for his leadership and skilful chairing”, but she stopped short of unequivocally condemning Trump’s position. She described “a difficult summit with, at times, some very candid discussions.” French president Emmanuel Macron, meanwhile, was more forceful, saying that international cooperation could not be “dictated by fits of anger and throwaway remarks.” And for Germany’s Angela Merkel, Trump’s actions were “a bit depressing”.

“A special place in hell”

Trump’s comments followed a rocky and acrimonious meeting and aftermath of the summit. Before it had even started, he announced that his government was to put tariffs on EU steel and aluminium and called for Russia to be readmitted to the group. Russia had been blackballed from the group in 2014 because of its annexation of Crimea, which Trump blamed on Obama – as “the one that let Crimea get away.”

He courted further controversy in the meeting itself, stating “we’re like the piggy bank that everybody is robbing… It’s going to stop now or we’ll stop trading with them.” And on the plane journey back to Washington aboard Air Force One, he fired out two tweets attacking Justin Trudeau for his comments about the US position. Trump described the Canadian head as “very dishonest & weak” and accused him of making “false statements”. And one trade adviser to Trump backed these comments up by saying:

There’s a special place in hell for any foreign leader that engages in bad faith diplomacy with President Donald J. Trump and then tries to stab him in the back on the way out the door.

The adviser subsequently said [paywall] he was wrong to use that phrasing.

In a second round of tweets, Trump also complained that the US has continually paid “close to the entire cost of Nato” to help defend countries that “rip us off on trade.” Trump’s characterization is, in fact, false; the US contributes roughly a fifth of NATO’s budget, which is calculated on a system based on each member country’s national income.

Trump also decided to pull the US out of a joint statement that was signed by all members pledging them to oppose protectionism and follow established trade rules.

Though none of these comments represent the most outrageous or obscene things that Trump or his team have said since he entered the world of politics, they are probably among the most hypocritical. A large part of his campaign for the presidency was based on opposition to free trade. He pledged to impose protectionist measures to ‘bring back American jobs to America’ and rebuild the country’s industry. The most obvious example of his opposition to free trade is his stance on NAFTA – a treaty between the US, Canada, and Mexico to promote free trade between the three North American nations that he virulently criticised throughout his campaign.

Now, he’s demanded that other countries drop all of their own barriers to US goods entering their countries – essentially asking other countries to do what he has claimed is destroying his. And his hypocritical threats – along with the ‘fits of anger’ that have followed – aren’t going down at all well with his G7 allies.