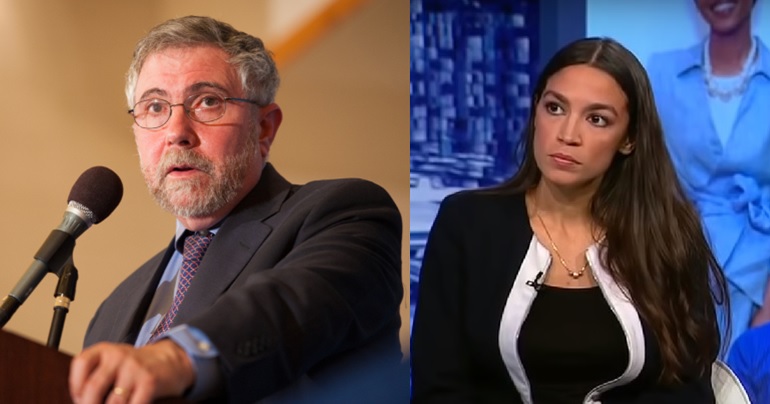 Progressive Democratic congresswoman Alexandria Ocasio-Cortez recently expressed her support for raising the top rate of income tax in the US to 70%. Naturally, right-wing voices have been going into overdrive criticizing the proposal. But a renowned Nobel Prize-winning economist has now weighed in to defend the idea. And others are joining the call for a return to a genuinely progressive tax system.

The ‘radical’ US left is back

On 4 January, CBS News aired its latest 60 Minutes program. This featured an interview with Ocasio-Cortez, who discussed a broad range of policy ideas, along with her thoughts on Donald Trump.

Asked whether she thought Trump was a racist, she responded simply: “Yeah, no question.” And in terms of her progressive credentials, she doubled down. When the presenter accused her proposals of representing a “radical agenda,” she recounted the achievements of US radicals like Abraham Lincoln and Franklin Delano Roosevelt. She then stated, “if that’s what radical means, call me a radical.”

But it was her comments on tax policy that has sparked most attention in the press. During the interview, she said she’d support raising the top rate of income tax to 70% in order to fund programs like a Green New Deal.

Right-wing pundits have described the idea as deluded, an attack on taxpayers, and a potentially harmful act of government overreach. But Nobel Prize-winning economist Paul Krugman has hit back against these jeers and defended Ocasio-Cortez’s proposal. In his weekly column in the New York Times on 5 January, he said:

the mere thought of having a young, articulate, telegenic nonwhite woman serve is driving many on the right mad — and in their madness they’re inadvertently revealing their true selves… The right’s denunciation of [Ocasio-Cortez’s] ‘insane’ policy ideas serves as a very good reminder of who is actually insane.

It also turns out that Krugman and many other experts back Ocasio-Cortez’s tax proposal. Because as Krugman argued, the proposal would in fact serve as a major boon to the economy. And he insisted that Ocasio-Cortez “is fully in line with serious economic research”, saying:

Her critics, on the other hand, do indeed have crazy policy ideas — and tax policy is at the heart of the crazy.

One right-wing critic of Ocasio-Cortez, meanwhile, was Grover Norquist. He is famous for spearheading efforts to lower taxes on the rich for previous Republican presidents. And he compared the 70% proposal to an act of war, arguing that:

What he duplicitously leaves out is the fact that Ocasio-Cortez said in the interview that she only suggested levying the tax on incomes over $10m. Far from representing ‘middle-class’ incomes, taxpayers with incomes of eight digits or more represent only around 16,000 US households. That’s less than 0.05% of the population. So in other words, it would apply only to the hyper-wealthy.

Writing in the Boston Herald, meanwhile, Adriana Cohen described the congresswoman as “clueless on tax policy”. She also threw in a few cheap shots for good measure – including reference to a video of Ocasio-Cortez dancing. And she claimed that the 70% policy would somehow have the effect of “tanking the U.S. economy and destroying millions of tax producing jobs”.

The right are forgetting (or ignoring) history

Norquist and other right-wing critics also tend to leave out the fact that, at certain times in its history, the US has already had tax rates that were, in fact, higher than 70% – and applied at much lower thresholds. This was the case even during Republican presidencies.

Throughout the administration of Republican Dwight Eisenhower, for instance, there was a top rate of 91% on income tax. And far from causing economic harm, the 1950s saw some of the best economic performance in US history. The economy grew overall by 37%, and historians consider the decade to have been one of America’s most prosperous.

Later Republican administrations also had high top-income tax brackets. During the presidency of Richard Nixon, for instance, the top rate stood at 70%.

Even during the administration of Ronald Reagan (the godfather of so-called ‘trickle-down economics’), the highest incomes were taxed at 50%. And until Reagan’s entrance into office, the top rate applied to incomes above $216,000 – a threshold almost 50 times lower than the $10m proposed by Ocasio-Cortez.

Time to draw a line in the sand

Krugman cites the academic research of Peter Diamond (another Nobel laureate in economics and “arguably the world’s leading expert on public finance”) and Emmanuel Saez (a leading expert on economic inequality). And according to their research, the optimal top rate of income tax is 73%.

In short, evidence from actual experts makes nonsense of the right’s attacks on Ocasio-Cortez. And progressives should not back down from pushing for a more progressive tax system, especially when doing so received bipartisan support throughout much of the 20th century.