'Before anyone else came here, we never had walls' - Native-American veteran stands strong against racism - The Canary 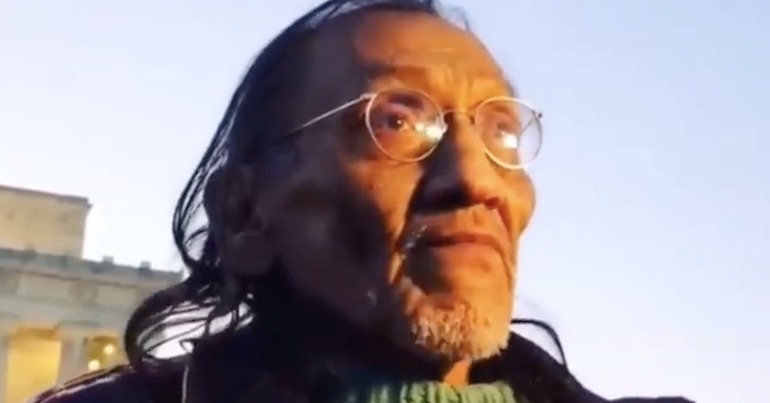 On 18 January, the first ever Indigenous People’s March and an anti-abortion demo called March for Life both took place in Washington DC. After the marches, a well-documented confrontation occurred. This shone a brutal light on just how dangerous Donald Trump’s lies and racism have become. It also shows how vital it is to support Indigenous rights at such a crucial time in history.

“You’re not supposed to have walls here”

Phillips said he was trying to ‘defuse tensions’ between the boys and a small group of very vocal ‘Black Hebrew Israelites‘.

After the confrontation, Phillips said:

This is Indigenous land… You’re not supposed to have walls here. We never did. For millennia, before anyone else came here, we never had walls. We never had a prison. We always took care of our elders… our children… we taught them right from wrong.

In tears as he spoke, Phillips – who’s also a military veteran – continued:

I wish I could see that energy in that young mass of young men down there… to put that energy into making this country really, really great – helping those that are hungry.

“A country that STILL defends and enables white supremacy”

Phillips summed up what many people felt about the episode. Because all the talk about divisive walls has only helped to boost white supremacists:

I see a brave Native American veteran being ridiculed by pompous white boys. Sadly, we live in a country that STILL defends and enables white supremacy. pic.twitter.com/GpgEC7n7D6

On 14 January, Trump unleashed more racist bile as he belittled the Wounded Knee Massacre in 1890. This was just one act in the genocide that murdered millions of Native American people after colonisation. One Native American said Trump’s comment was “equivalent to making a ‘joke’ about 9/11, Pearl Harbor or the Holocaust”.

Just days later, the young people above felt bold enough to copy this pattern of mocking Native Americans in public.

Then, of course, Trump waded in to defend the students.

“That song was a prayer”

But this whole situation goes far deeper. Because for Native Americans, playing the drum “is also a political act”. Following Wounded Knee, it was illegal to “freely practice their religion” until the 1978 American Indian Religious Freedom Act. Drumming is a sacred practice. And Phillips’s song had clear intent, as he told Indian Country Today:

I’m still scared. I’m still feeling vulnerable. But I’m not gonna back down. Those young people from that school, that song was a prayer for their future and my children’s future. We’re facing critical times and we’ve got to make choices, and they’re going to be some hard choices… I see a future though… I see a bright, beautiful future if we want it… It’s ours to pass on to the next generation, but we got to be willing for it.

As The Canary previously reported, two Native American women recently took office in Congress for the first time. Deb Haaland and Sharice Davids offer some hope that the battle for Indigenous rights now has some political representation. And both women condemned the harassment of Phillips:

This Veteran put his life on the line for our country. The students’ display of blatant hate, disrespect, and intolerance is a signal of how common decency has decayed under this administration. Heartbreaking. https://t.co/NuPnYu9FP4

Nathan Phillips' behavior in the face of that crowd demonstrates why we have so much respect for our elders. Our society is failing a portion of our youth, as these young men highlight with their misguided actions. Leadership starts with each of us. Thank you, Nathan Phillips. https://t.co/XLcen4yEAZ

The November midterms marked a turning point for women and minorities in US politics. Ilhan Omar and Rashida Tlaib also become the first Muslim women in Congress. Alongside Alexandria Ocasio-Cortez, this new generation is already shaking up white, male, establishment politics. But in December 2018, Trump began a shutdown of the US government (which would soon become the longest ever). His aim? To force through contentious plans for a wall on the Mexican border. So there’s a race against the clock to halt Trump’s foul, racist, sexist views gaining further influence and causing even greater damage.

This shameful behavior is a direct consequence of individual-1's dehumanizing rhetoric and actions towards communities of color. Do better! https://t.co/dyEejlA00J

The braying mob of students reportedly attend an elite Catholic private school. The fact that this school sends mostly male children to protest against women’s reproductive rights is bad enough. But a PR company distributed a ‘statement’ defending the child who leered in Phillip’s face.

But while the establishment closes ranks, Phillips’s bravery wins. He is a lifelong environmental campaigner. He also protested at Standing Rock to halt the Dakota Access pipeline. For most Indigenous people, protecting their land, their fundamental human rights, and our planet is the basis of both politics and religion. As we tip closer into environmental catastrophe, we need to listen to Phillips, Haaland, Davids and their tribes now more than ever.

CORRECTION: Phillips is a military veteran. However, while he served at the same time as the Vietnam War, he did not fight in it. The article was updated at 4pm (GMT) on 23 January to make that clear.