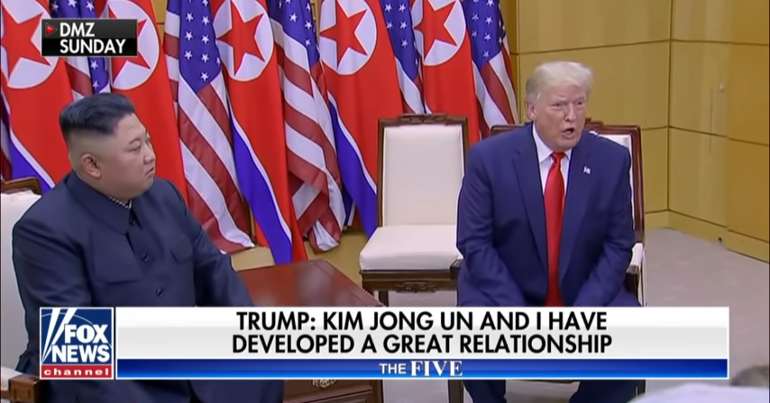 It’s no secret that Rupert Murdoch‘s Fox News is the propaganda wing of the modern Republican Party. After all, that’s been the aim of the television station since its founding. But Fox commentators may have left some viewers in shock this week when they let their ‘fair and balanced’ mask slip, openly admitting their bias.

On 4 July, several hosts on the infamous right-wing station essentially admitted that it reflexively supports whatever a Republican president does, while automatically opposing whatever a Democratic president does.

While praising Trump’s meeting with North Korean leader Kim Jong-un, one host let slip that, had former president Barack Obama done the same thing, they would have criticized him for it. In short, one rule for one party, another for its opponents.

Of course [the Democrats are] going to attack him. That’s what you would do. And let’s be honest: if it were an adversary from [the Democrats], we would do the same.

Co-host Jesse Watters then said jokingly (apparently mimicking the style Fox would have adopted if Obama had done the same thing):

How dare Obama meet with a dictator with no preconditions!?!

Here we saw an unusual admission on the part of Fox personnel of what’s long been clear: that the station acts as the propaganda arm of the Republican Party. But what Gutfeld said next was more revealing still. He offered what on the surface appears to be a thoughtful endorsement of diplomacy. He said:

If you see diplomacy as a weakness, what does that leave you with? We know that there are tyrants and creeps in this world. You can hold two thoughts in your head that there are rough customers in the world and you got to talk to them.

What is so contradictory here is that he’s calling for diplomacy with North Korea, yet he and his co-hosts are the very people who constantly argue for aggression elsewhere – whether it be toward Iran, Venezuela, Nicaragua and Cuba today, or Iraq, Afghanistan and Libya in years past. So what explains this discrepancy? Well, for them, diplomacy in simply ok in this one case because it was Trump at the helm.

Obsession with US status in the world

Gutfeld then back-peddled, stating: “Well, we lost our status in the world while we’ve elevated [Kim Jong-un’s] status.” Here he is giving voice to one of the classic tenets of American right-wing mythology – what has come to be known as the ‘credibility trap’. As Vox explained:

The United States, according to this theory, has to follow through on every threat and confront every adversary in order to maintain America’s global credibility.

This then serves as a convenient self-justification loop; Washington takes a stance, and then taking that stance becomes its own justification.

More of the same

But amazingly, Gutfeld then seemed to express scepticism in his own argument. He said:

If that’s how you value these things then no wonder we’ve made no progress… If you keep saying that diplomacy causes a loss of status, why have diplomacy at all?

Unbelievably, another co-host then pointed out that then-candidate Barack Obama said something very similar in a 2008 Democratic primary debate:

I will meet not just with our friends, but with our enemies.

Of course, Fox viciously attacked Obama at the time for making this statement. But Obama turned out to be scarcely less reactionary than his predecessor, George W Bush. So while Fox presents a black-and-white worldview in which everything the Republicans do is good and everything the Democrats do is bad, the reality is that both US parties support a world order based on imperialism and the spread of neoliberalism. And while Trump deserves credit for taking a diplomatic stance with North Korea, his stance on Venezuela, Cuba, Nicaragua and Iran continue to show that his presidency is just more of the same.