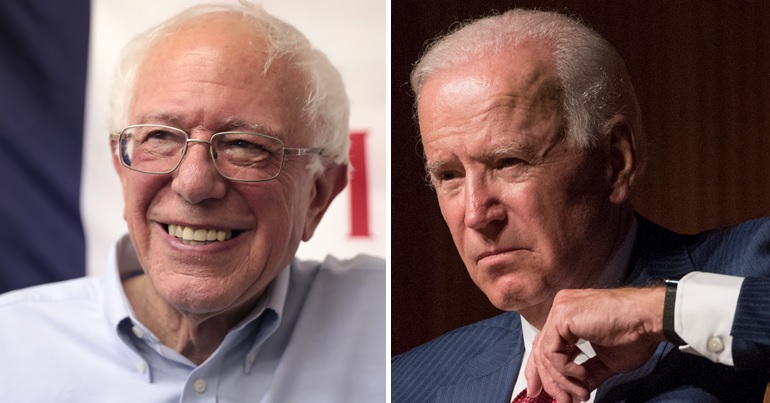 Bernie Sanders has been the frontrunner in the early stages of the race to become Democratic Party candidate for November’s US presidential election. And today, on what voters know as ‘Super Tuesday‘, he could secure an important win in a contest where establishment forces are doing their best to defeat him.

Former vice president Joe Biden will be Sanders’ main rival. Long the favourite of billionaire backers, Biden has so far had a weak ground game and lacked enthusiastic support from ordinary people. But he received a boost in recent days when two other billionaire-backed candidates dropped out and backed him after his victory in South Carolina. Sanders, meanwhile, relies on massive, enthusiastic, grassroots support, and has zero billionaire backers.

Whether Sanders wins big in the 14 Super Tuesday states or not, however, will depend on how well his progressive message has managed to cut through vicious establishment propaganda and bias.

Many independent analysts believe Sanders is the best bet to beat Donald Trump. Academic and author Robert Reich, for example, recently put out a video arguing precisely that. And at the same time, he took down the key elitist attacks on Sanders, arguing that:

The Democratic establishment is wrong to think @BernieSanders is too progressive to win a general election. He's the Democrats’ best shot at taking back the White House.

Share this with all the Bernie skeptics you know before #SuperTuesday: pic.twitter.com/pS7vjfywA3

Also… look at the alternative

The main challenger to Sanders, meanwhile, is the lukewarm Biden; a man who offers the same old centrist posturing that failed to beat Donald Trump in 2016. So it’s also worth looking at why voters shouldn’t pick Biden:

NEW: Joe Biden voted to kill a Paul Wellstone-Bernie Sanders amendment that would require drugs funded with public research money to be sold at a "reasonable price" to the public https://t.co/mWCymCEWQr

We will not defeat Trump with a candidate like Joe Biden who voted for the Iraq War, tried to cut Social Security and supported NAFTA. pic.twitter.com/Lk7U7JDS21

I do not believe we will defeat Donald Trump with a candidate like Joe Biden who supported the Iraq War. pic.twitter.com/8tII7O3Mal

And this is Bernie Sanders' strongest competition going into Super Tuesday… pic.twitter.com/Nc7XHxL0Fv

Frankly, Joe Biden is showing he doesn't have the cognitive faculties to run a successful campaign for President, much less do the job. It'd be hypocritical to point out Trump's cognitive deficits while ignoring the obvious with Biden. It's time for them both to retire. https://t.co/SNuOUcx5fc

With so much at stake in this election, many see a ‘we can’t do better‘ Biden candidacy as a major risk:

Some folks seem to be looking at Biden like a comfortable old sweater they can put on to recover after the trauma of trump.

Here's the trouble: the house is on fire. And that old sweater is soaked in fracked gas.

So get out of your comfort zone and vote #Bernie2020.

I am tired of extreme wealth inequality, extreme corporate greed and monopolization, extreme risk to the planet from climate change.

Status quo politics will not deliver the change we need. https://t.co/3K7pVUA0G4

What do they call doing the same thing over and over again,& expecting different results?

If we do not run a strong, progressive candidate that directly addresses the core crises Americans face, we take a major risk.

The time is now.
Vote @BernieSanders.pic.twitter.com/rzaKXx0Tk6

Klobuchar and Buttigieg are endorsing Biden. As the Democratic Party’s “moderate” (or shall we say “establishment”?) wing coalesces around Biden to stop Bernie, it's starting to look a lot like 2016, when the same wing rallied around Clinton.

I think that's a mistake.

Sanders is a real alternative

Although it’s easy to debunk the attacks on Sanders and expose Biden’s massive weaknesses, establishment forces won’t stop trying to derail the momentum Sanders very clearly has. They’ll keep dishonestly smearing the common-sense choice to take on Trump, largely because he represents a real threat (however moderate) to the selfish interests of elitist warmongers and billionaire grifters.

Fortunately, Sanders supporters have passion and drive. And if their efforts succeed in cutting through establishment propaganda, Sanders could come out of the “crucial” Super Tuesday vote in a very strong position to take on Trump in November.