Sanders is moderate, but is still facing vicious red-baiting attacks - The Canary 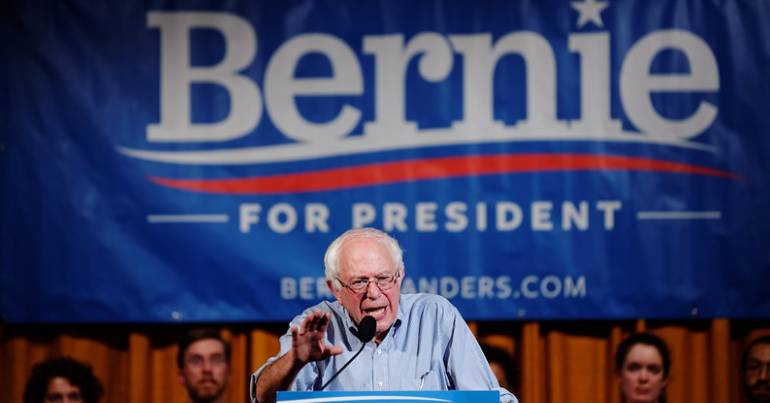 As Bernie Sanders solidifies his place as the frontrunner in the Democratic Party primary, his rivals are going into full-scale attack mode. They’ve been using classic ‘red-baiting’ tactics by homing in on his status as a self-identified ‘democratic socialist’. This needs calling out. But it’s also worth considering whether Sanders’s use of the ‘s word’ is helpful – or even accurate.

The attacks pile up

On 25 February, the Democratic candidates hoping to become Donald Trump’s rival in November’s election faced off in a televised debate. This took place in South Carolina shortly before that state’s primary vote. Having won the two previous contests in New Hampshire and Nevada (and winning the most votes yet still somehow ‘losing’ in Iowa), Sanders went into the debate as the undoubted frontrunner.

As a result, the party’s establishment candidates sunk to pathetic depths in a last-ditch attempt to derail his campaign. Most notable was the classic red-baiting tactic of associating socialism with everything from unelectability to Stalinist authoritarianism. These attacks reflected Sanders’s status as frontrunner – something he himself picked up on when he quipped “I’m hearing my name mentioned a lot. I wonder why.”

The meteoric political rise of Bernie Sanders has sparked a renewed debate in the US about what socialism is. Economist Paul Krugman, for example, argued in his New York Times column that Sanders’s use of the word amounts to “self-indulgence”. This follows comments made in 2015 by then-Danish prime minister Lars Løkke Rasmussen. He argued that neither Denmark nor other Nordic countries (which Sanders has frequently invoked as inspirations) can accurately be described as socialist. For Rasmussen, they are instead market economies with a strong welfare state.

He has a point. This ‘Nordic model’ is more accurately described as ‘social democracy’ rather than ‘democratic socialism’. The major difference is that, whereas the former leaves most of the economy in private hands, the latter goes a step further by bringing large swathes of it into popular ownership.

With respect to Krugman’s charge of “self-indulgence”, however, there’s an important distinction worth making – between one’s proposed political program and one’s personal ideological orientation. Certainly, Sanders’s policy proposals do not constitute socialism and he shouldn’t be calling them that. Rather, they are a laudable set of bread-and-butter social democratic reforms that any remotely progressive person should be on board with. In the US, due to the decades-long preference for neoliberalism by both major parties, this simply means catching up with Europe (and Canada) on issues such as publicly-provided universal healthcare.

But whether Sanders can call himself a socialist is a matter of conscience for him. In a 21st-century context, socialism is not immediately implementable, but rather aspirational. Control of the state, congress, the military and the media by private corporate interests is too entrenched – especially in the US – to make an immediate overthrow of their power remotely viable. Therefore, many see dismantling it in a gradual, piecemeal fashion as the most effective strategy.

What does socialism mean?

We need not be rigid about how we bring this about. The founder of the Democratic Socialists of America Michael Harrington spoke of the importance of being a “long-distance runner”. Even the godfather of social democracy, Eduard Bernstein, saw social democratic reforms not only as ends in themselves but as a means of gradually achieving socialism by replacing capitalism bit by bit. Indeed, the book in which he laid out the thesis for this is called Evolutionary Socialism.

As the late Harvard professor Richard Levins put it:

Socialism is not a thing but a process, the process by which the working classes of the city and countryside and their allies seize the reins of society to satisfy their shared needs.

But what socialism must ultimately mean is an end to capitalism as it currently exists – i.e. a globalized economic system that unsustainably plunders resources; pollutes at catastrophic levels; perpetuates endless war and imperialism; undermines democracy and a genuinely free press; and even (take note conservatives) undermines national sovereignty. According to Naomi Klein, the current model of capitalism might ultimately make the planet uninhabitable for people and non-human animals alike.

A vision for a different world

What makes someone a socialist is a desire to replace this capitalist system with something different. And for many, that doesn’t mean a crude replica of a Soviet-style economy.

It could mean a mixed economy with public ownership of certain key economic sectors existing alongside some small privately-owned businesses that operate within certain defined limits – and preferably as worker-owned and worker-managed cooperatives where possible. It might mean public banks operating alongside some small progressive private financial institutions – like the credit union Signal Financial, which is fully owned by its account holders.

It definitely would mean, however, a restructuring of society to make economic forces work primarily for the fulfilment of public need rather than for the pursuit of private profit. The implementation of Sanders’s proposals alone would not achieve this. But by his pledge to take on corporate America, he seems to intrinsically understand and support the spirit of this aspiration. Therefore, while he might not be advocating socialism in the here and now, he seems to share the vision for a different kind of society that democratic socialists strive for in the long term. And if he defeats Trump in 2020, his government could mark an important step towards making that vision a reality.