Bernie Sanders is in pole position with Nevada win. But the establishment push-back will now begin in earnest. - The Canary 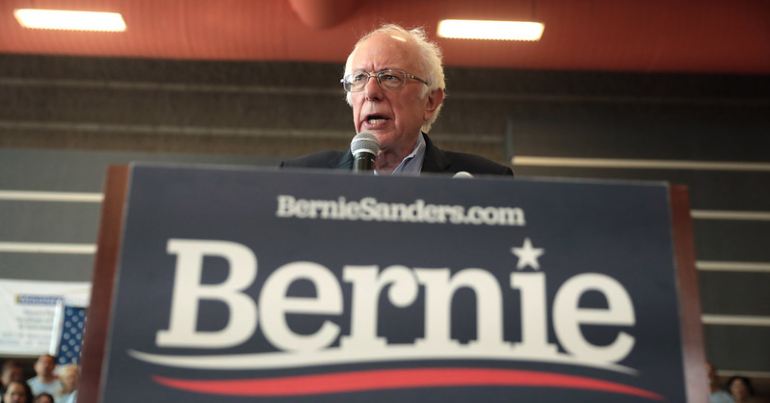 Bernie Sanders has just solidified his status as the front-runner in the contest to choose who will face Donald Trump in the presidential elections later this year. Though these are exciting times, there’s also a rocky road ahead. Because the establishment campaign to discredit him in every way possible will now begin in earnest.

Third democratic victory in a row

On 22 February, Sanders won the state of Nevada in the Democratic presidential primary race – the party’s internal candidate selection process. Sanders sailed to an easy victory with over 95% of results in at the time of publishing. Centrist rival Joe Biden, who was vice president during the Obama presidency, trailed far behind in second place with just over 20% of delegates.

Following his win in the New Hampshire primary and his close second place in the befuddled Iowa caucus – in which he actually won the most votes – Sanders is now undoubtedly in pole position. And that can mean only one thing – powerful interests who stand to lose from a Sanders presidency will now go into overdrive in their attempts to discredit him.

Good reasons to be scared

They’re right to be scared. Whereas Trump ran a phony campaign in 2016 claiming he would ‘drain the swamp’ only to kowtow to the usual corporate and military interests once in office, Sanders represents a genuine threat to the status quo. His pledge to introduce publicly provided universal healthcare, for example, would decimate the US’s private health insurance companies. CEOs and shareholders of these companies make millions every year from the profiteering that the current US healthcare model encourages.

Likewise, Sanders’ pledge to oppose needless war represents a huge threat to the powerful corporations that make up the military-industrial complex. These private entities have a vested interest in the US continuing its wars and occupations around the world since more war and occupation means more profits for them. And so they (rightly) fear that, as president, Sanders would impose a moratorium on new military operations and shut down the hundreds of military bases that the US has on foreign soil.

The smear campaign that will soon be launched against Sanders will be modeled in large part on that leveled against Jeremy Corbyn in the UK. Political scientist Norman Finkelstein described the latter as “basically a dress rehearsal for what’s going to happen here [in the US against Bernie Sanders]”.

Of course, smearing Sanders as an anti-Semite won’t be possible because he himself is Jewish. However, as Finkelstein explains, “he is surrounded by a lot of people on whom that charge will stick”. This includes people in his campaign staff who have been vocal in their support for Palestinian rights. It also includes members of the so-called ‘Squad’ – a group of progressive women members of congress who also have a strong record on speaking out on Palestinian issues and who, naturally, have endorsed Sanders. Amongst them are the first Muslim women ever elected to congress – Palestinian-American Rashida Tlaib and Somali-American Ilhan Omar.

The limits of the Corbyn comparison

Though these are certainly legitimate concerns, there are also limits to this comparison. For one thing, because of the US’s presidential political system, any potential smear campaign is more limited in time. Whereas Corbyn had to put up with it for almost the entire five years that he was party leader, for Sanders, it will only last for the time remaining between now and the presidential election in November.

Second of all, the Democratic Party has not instigated a process of purges based on bogus accusations of antisemitism. As Finkelstein put it: “The Labour Party in the midst of this hysteria… has turned into a thought police… That’s unthinkable here [in the US]. Has anybody suggested that Ilan Omar should be expelled from the Democratic Party?”

And most crucially, Bernie Sanders has proven himself to be both more adept at countering attacks from right-wing forces and more steadfast in rejecting them for the nonsense they are. Whereas Corbyn suffered from his intrinsic niceness, as a tough, straight-talking New Yorker, Sanders will likely prove more willing to stand his ground.

And that means he could eventually triumph against Trump this November.