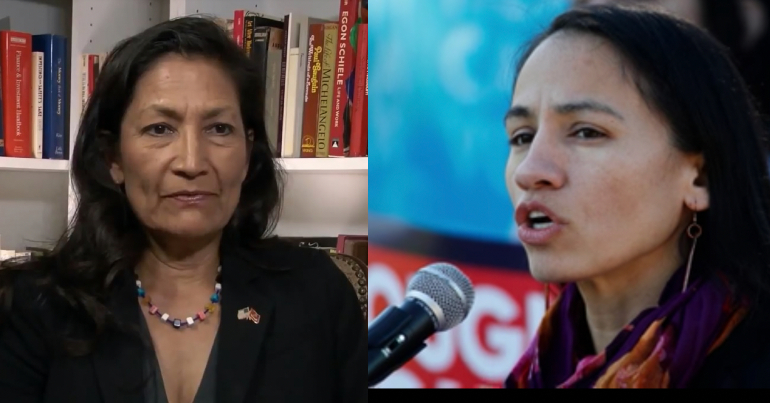 The US has just elected two Native American women to Congress for the very first time. And considering that the brutal treatment of North America’s indigenous population continues to this day, this breakthrough is of huge symbolic importance.

Democrat Deb Haaland, who is a member of the Laguna Pueblo tribe, won a seat in New Mexico. Sharice Davids, also a Democrat and a member of the Ho-Chunk nation, defeated an incumbent Republican in Kansas.

Haaland in particular had campaigned on a clearly progressive platform, expressing commitment to:

fighting for Medicare for all, moving to 100% renewable energy, taking big money out of politics, women’s equality, permanent solution for our dreamers, and taking on the NRA!

Haaland and Davids are the first Native women elected to Congress in US history. To put that in perspective, consider that – of the over 10,000 people that have served in Congress since its first meeting in 1789 – none of them have been Native American women. Indeed, Native Americans have faced political marginalisation in the US ever since its founding in 1776.

America’s indigenous population has faced many centuries of oppression, discrimination, and marginalization. In fact, the word genocide is totally appropriate. Historians have estimated that the indigenous population upon European contact may have been as high as 18 million, and it had sunk to under 250,000 by 1890.

Native Americans have also experienced extensive ethnic cleansing. During the ‘Trail of Tears’ in the 1830s, the US government and settler colonialists pushed many Native American tribes to the west of the Mississippi River. Since then, Washington has violated countless treaties, especially when doing so suits powerful interests.

For example, corporations have pushed Native Americans off their land to make way for resource extraction. They have also gone into reservations and extracted resources with little thought for the consequences to those living there.

Uranium and coal mining on the Navajo Nation and Hopi Reservation, for instance, has led to a decades-long public health crisis for members of those tribes.

Today, the nearby San Carlos Apache Nation in Arizona is resisting efforts to sell some of its land to foreign mining conglomerates.

On the Pine Ridge Reservation in South Dakota, for example, life expectancy is 48 years and 52 years for men and women respectively – the second lowest in the Western Hemisphere after Haiti. Unemployment stands at at least 80%, while the median income stands at around $4,000 per year. And tuberculosis and diabetes levels are eight times the national average.

On the Navajo Reservation, meanwhile, over 40% of residents lack access to running water or basic restroom facilities.

A wave of women from diverse backgrounds storm Congress

On 6 November, the US midterm elections saw the Democratic Party win control of the House of Representatives and the Republicans keep control of the Senate (while doing better than expected in many state-level races).

But there were some exciting victories for progressives – many of them women from historically underrepresented groups like Haaland and Davids. Among these was the landslide victory of Puerto Rican-American Alexandria Ocasio-Cortez. At 29 years of age, she became the youngest woman ever elected to Congress. Palestinian-American Rashida Tlaib and Somali-born Ilhan Omar, meanwhile, became the first Muslim women to enter Congress.

Having two Native American voices in Congress will prove invaluable. But it will take much more to overcome the centuries of repression, mistreatment, and exploitation that continue to this day.

– Firstly, see more on truly progressive candidates in the US at Our Revolution and Justice Democrats.