Multiple progressive victories help Democrats to take the House, but a 'blue wave' fails to materialise - The Canary 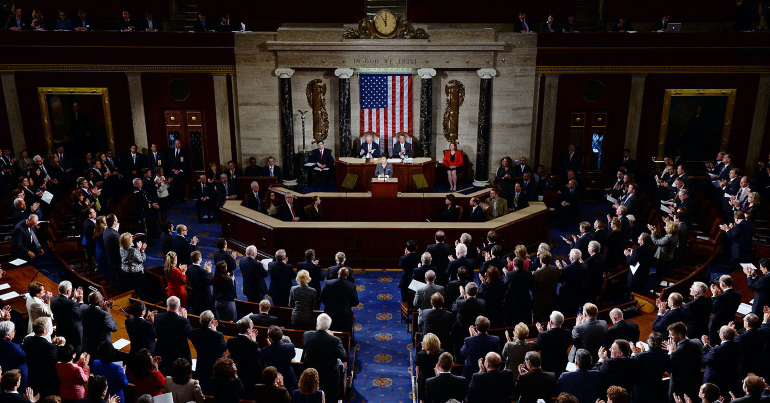 Donald Trump and his allies didn’t suffer the rout that pollsters and commentators had predicted in the 2018 mid-term elections. But Democrats made significant gains across the US; and the victory of several rising progressive stars in particular suggests the beginning of a new era.

Up for grabs in the 6 November mid-terms were all House of Representative seats, a third of Senate seats, and countless state governorships and state legislature seats across the country. And due to the unpopular and highly divisive presidency of Donald Trump, many commentators were predicting a ‘blue wave’ – a Democratic Party landslide victory. But that didn’t happen.

As polls had widely predicted, the Democrats did take back control of the House of Representatives. By the morning of 7 November, they had surpassed gaining the 23 seats from the Republicans necessary to give them a slim majority in the House. But it was far from a landslide.

Amongst the winners, however, were several progressive women who successfully challenged figures from establishment Democratic right-wingers earlier this year. Alexandria Ocasio-Cortez, for example, sailed to victory in a New York congressional district with just under 80% of the vote. She had previously unseated the fourth most senior Democrat in the House. At 29 years of age, Ocasio-Cortez became the youngest woman ever elected to Congress.

Other progressive victors include pro-Palestinian candidates Rashida Tlaib and Ilhan Omar. Both won their elections, becoming the first Muslim women to be elected to Congress in US history.

But disappointment in Senate and state races

Elections at the state level were also somewhat disappointing for the Democrats. In a closely watched race in Florida, progressive Andrew Gillum (who received the backing of Bernie Sanders) lost to the pro-Trump Ron DeSantis.

In Georgia, meanwhile, progressive African-American candidate Stacey Abrams appeared to have lost by a small margin to Republican Brian Kemp. But in Georgia, a candidate must gain a majority of votes, leaving open the possibility of a run-off election between the two later this year.

There were some important victories for progressives in state contests, however. In Wisconsin, for instance, Democrat Tony Evers unseated notorious union-bashing Republican governor Scott Walker.

Democrats also won important state governor battles in Kansas, Illinois, Maine, Michigan, New Mexico and Nevada. The victory in Kansas was of particularly symbolic importance given the state’s former status as a ‘hotbed of radicalism’ only to have later become a Republican stronghold.

Trump weakened, but not defeated

In spite of the heavy losses in the House, Donald Trump described the mid-term results as a “tremendous success”. He also congratulated himself for having “stopped the blue wave“. And, of course, he couldn’t resist the temptation to use the result as an opportunity to attack the press, tweeting: “Yesterday was such a very Big Win, and all under the pressure of a Nasty and Hostile Media!”

Although the ‘blue wave’ might not have taken place, the entrance of progressives into Congress offers hope that bold new voices will challenge the increasingly fascist and authoritarian tendencies of the Trump administration. And their victories could mark the start of a new era for progressive politics in the US.

– For information on truly progressive candidates in the US, see Our Revolution and Justice Democrats.