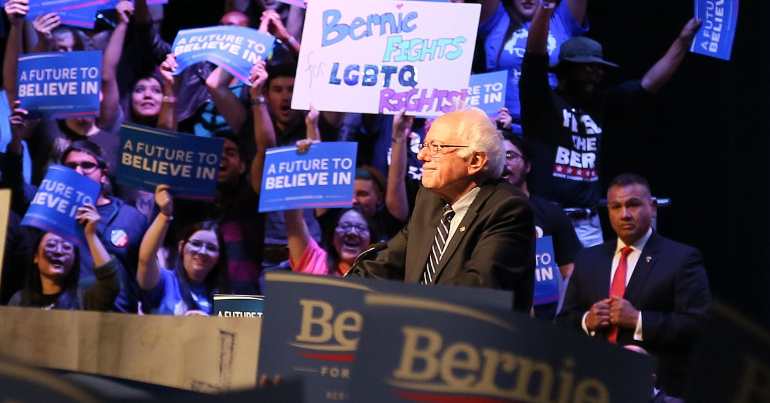 Bernie Sanders has won the most votes in the first two contests of the Democratic Party primary process. This means that he’s in pole position to face Donald Trump in the US presidential elections later this year. But progressives shouldn’t start the jubilations just yet. Because there are already signs that the process is again being rigged in the favor of Sanders’s establishment rivals.

Outright victory in New Hampshire. But not in Iowa…

On 11 February, primary voters in New Hampshire went to the polls. The following day, Sanders was declared winner with 25.7% of the vote. The small New England state has long been the second to hold a vote in the primary contests for both major US parties.

The story in Iowa – always the first – was not so straightforward. Although Sanders won the most votes from party members (26.5%), he technically lost the chaotic contest due to arcane rules that govern the small Midwestern state’s unique process of allocating ‘delegates’ – known as a ‘caucus’. Pete Buttigieg – a ‘centrist’ figure with worrying militaristic tendencies – ‘won’ with 25.1% of votes.

This, of course, is not the first time that Sanders has been screwed in a primary process. In the 2016 Democratic primary, he ‘lost’ to eventual nominee Hillary Clinton in spite of polls showing her – along with Donald Trump – to be one of the most despised politicians in the country and Sanders to be one of the most well-liked. Even one poll conducted by the far-right Fox News channel found him to be the country’s most popular politician.

The process seemed to be rigged against him from the get-go, however. The vast majority of so-called ‘superdelegates’ were pledged to Clinton before the race even began, for example. And that’s no surprise, because these tend to be internal party figures who are loyal to its establishment wing (Hillary Clinton’s own husband, former president Bill Clinton, was one in 2016). In addition to them giving Clinton an unfair advantage – they are, after all, not elected by anyone – they also gave her a headstart by rendering her the ‘frontrunner’ in the media (and hence the public consciousness) before a single vote had been cast in any primary or caucus.

There were also cases similar to the bizarre outcome of Iowa in 2020. Sanders won the most votes among rank-and-file party members in the 2016 Michigan and Indiana primaries, for example, yet somehow still ‘lost’ to Clinton.

It also turned out that the Democratic National Committee (DNC) – the party’s governing body – deliberately tried to derail the Sanders campaign. First, it shut down its access to files with voter database information. Then, internal DNC emails published by WikiLeaks showed that its leadership had launched a campaign to discredit Sanders in the press. One of them, a communication between two DNC communication officials, read: “Wondering if there’s a good Bernie narrative for a story, which is that Bernie never ever had his act together, that his campaign was a mess”.

There is a simple explanation behind this Machiavellian scheme. For decades, both major US parties have essentially acted as the political wing of corporate America. And establishment Democrats have taken just as much money from Wall Street, the private health insurance industry, and other special interests – if not more, in some cases – as their Republican rivals.

Needless to say, these companies don’t give money to candidates for public office out of the goodness of their hearts; they expect something in return. As The Canary previously reported, around this time last year the Intercept revealed that an aide to a leading Democratic member of congress had admitted in a slide show that his boss would work to derail any attempt to establish public universal healthcare. This is just one example of the way both major parties have come to serve the interests of their corporate paymasters rather than the US public.

Since Sanders has pledged to represent public rather than corporate interests, he poses a threat to their power. And this explains the insane lengths that the Democratic establishment will apparently go to in order to defeat his campaign and instead install another corporate lackey as their party’s candidate.