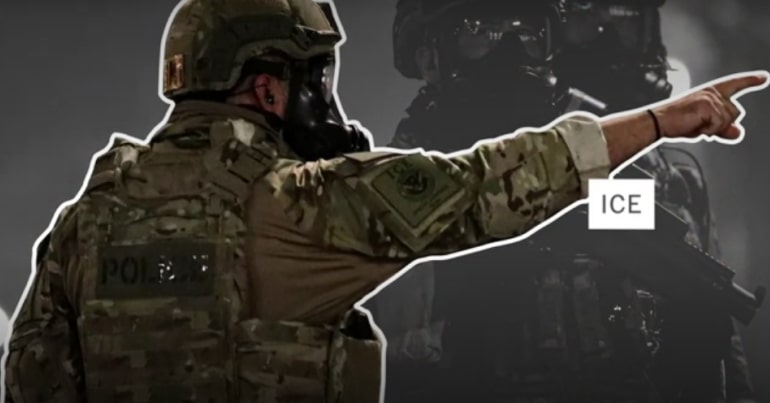 Paramilitary units deployed by Donald Trump to the US city of Portland, in response to Black Lives Matter (BLM) protests, have been identified. Interestingly, intelligence for one of the units is handled by a multinational corporation that recently won a UK contract to manage NHS data.

Units engaging with protesters in Portland have been identified in a New York Times video. They include US Marshals, Border Patrol Tactical Unit (BORTAC), and Immigration & Customs Enforcement (ICE).

It’s claimed other units deployed to combat the protests in Portland include “Customs and Border Protection (CBP)… the Coast Guard, the Federal Protective Service and the Transportation Security Administration (TSA)”.

According to a December 2016 article in the Intercept Palantir’s contract with ICE came to $34.65m. Their remit was to help the Customs and Border Patrol Agency create the Analytical Framework for Intelligence (AFI) system to track immigrants. Then, in August 2019, ICE was awarded a new contract, worth $49,874,018.14, with Palantir. It’s Palantir’s software that was used “to target and identify the families of unaccompanied children crossing the [US-Mexico] border in 2017”.

ICE agents also used Palantir software as part of their domestic and transnational criminal investigations. And it’s claimed that ICE uses Palantir’s FALCON mobile app so that its field agents can “search through a fusion of law enforcement databases that include information on people’s immigration histories, family relationships, and past border crossings“. Between October 2017 and 2018, “ICE workplace raids nationwide led to 1,525 administrative worksite-related arrests for civil immigration violations”.

Palantir also works with Health and Human Services, the FBI, and Homeland Security to track people as part of the ‘War on Terror’. In 2019 Palantir won a $800m contract with the US army. Palantir has provided intelligence support for US special operations, including storage and analysis of a range of information, such as cultural trends and roadside bomb data.

Palantir’s client list has included amongst others, the CIA, the FBI, the NSA, the Centre for Disease Control, the Air Force, the Marine Corps, Special Operations Command, and West Point.

According to Big Brother Watch, the NHS dataset managed by Palantir and other selected companies includes:

Palantir was used as part of a GCHQ project that sought to improve GCHQ’s ability to collect news articles, blog posts and tweets.

BORTAC, another one of the units deployed in Portland, was setup in 1984 to “serve a civil disturbance function in response to rioting at legacy Immigration and Naturalization Service detention facilities”. BORTAC teams aren’t confined to the US and were active in Iraq as part of Operation Iraqi Freedom and Operation Enduring Freedom. They have also operated in Afghanistan and Latin America and elsewhere. At a national level, BORTAC teams serve as Border Patrol’s own special weapons and tactics (SWAT) team. One whistleblower described BORTAC agents as “the most violent and racist in all law enforcement”.

In recent days and weeks, there have been numerous reports of paramilitary agents attacking BLM protesters in Portland. Use of tear gas against the protesters is commonplace:

The tear gas has been recorded as being sprayed directly into someone’s face:

Feds pepper sprayed this Vietnam Veteran/photographer right in the face. His name is Mike Hastie. He was an Army medic. #PortlandProtests pic.twitter.com/CLZwKvuTxH

In response to the paramilitaries’ violence, protesters attacked a DHS/ICE field office in Atlanta:

DHS/ICE Field Office ransacked by frontliners in Atlanta in solidarity with the freedom fighters of the #PortlandProtests and every other suffering poor person trying to build a new world.#PortlandSolidarity #GeorgeFloyd #RayshardBrooks #BlackLivesMatter pic.twitter.com/kl7t3hiEKA

New banner outside the federal courthouse tonight, way to use the giant new spotlights installed to protester’s advantage 💪 it’s beautiful and I love it #portlandprotests pic.twitter.com/c0FgQsxQzZ

More units to be deployed

It’s reported that Customs and Border Protection teams have been despatched to Seattle, too. On 24 July, US president Donald Trump told Fox News that, if necessary, he’d send 75,000 federal agents into US cities to tackle protests. That could well be a diversionary tactic for Trump, who likes to portray himself as a champion of law and order, especially in an election year when his poll ratings are looking poor.

Diversion or not, this is no longer just about Black Lives Matter and violence by armed police. This is a class war that could spread from state to state, city to city, across America.

And assisting Trump is a paramilitary ‘army’, helped by a company that has access to UK citizens’ private data – which is more than a little worrying.