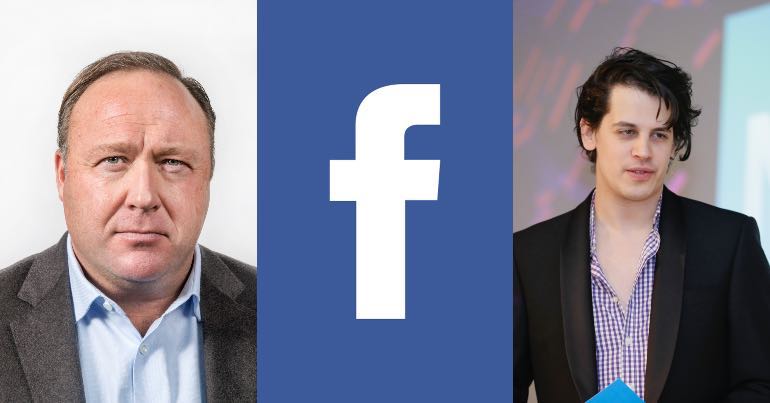 Facebook has banned a number of far-right activists and commentators from its platforms for breaking its rules. Alex Jones and Milo Yiannopoulos were two of those whose accounts were banned by the company. Jones has previously claimed the US government faked the Sandy Hook school shooting and that Hillary Clinton is part of a child sex-trafficking ring.

Yiannopoulos has in the past called for “vigilante squads” to attack journalists. More recently he said the Christchurch massacre in New Zealand happened because the government “mollycoddles extremist leftism and barbaric, alien religious cultures”.

Facebook said it was banning the accounts because they violated its rules, specifically those relating to “Dangerous Individuals and Organizations”. These rules state that it doesn’t allow individuals or groups who encourage or engage in violence to use its platforms. In a statement it declared:

We’ve always banned individuals or organizations that promote or engage in violence and hate, regardless of ideology.

Media Matters, an NGO which monitors and corrects “conservative misinformation” welcomed the bans. It argued that:

This move by Facebook is a step in the right direction, opening doors to making its platforms safer and inspiring some optimism that the tech company might be capable of taking responsibility for the ways its platforms have empowered extremists.

Facebook said its methods are “extensive” which is why the bans took place.

But Media Matters asserted that there is more Facebook could do. This includes increasing human moderation of rules. It also argued that Facebook “should limit the visibility of content” whose traffic comes from “toxic sources”.

The National Society for the Prevention of Cruelty to Children (NSPCC) has previously criticised Facebook for its lack of proper moderation. Similarly, as reported by the Irish Times, a number of violent videos remained on Facebook even after they had been reported by users and assessed by moderators.

And last year, a member of the Irish parliament insisted that left unregulated, social media, in general, is a “very real threat to western democracy”.