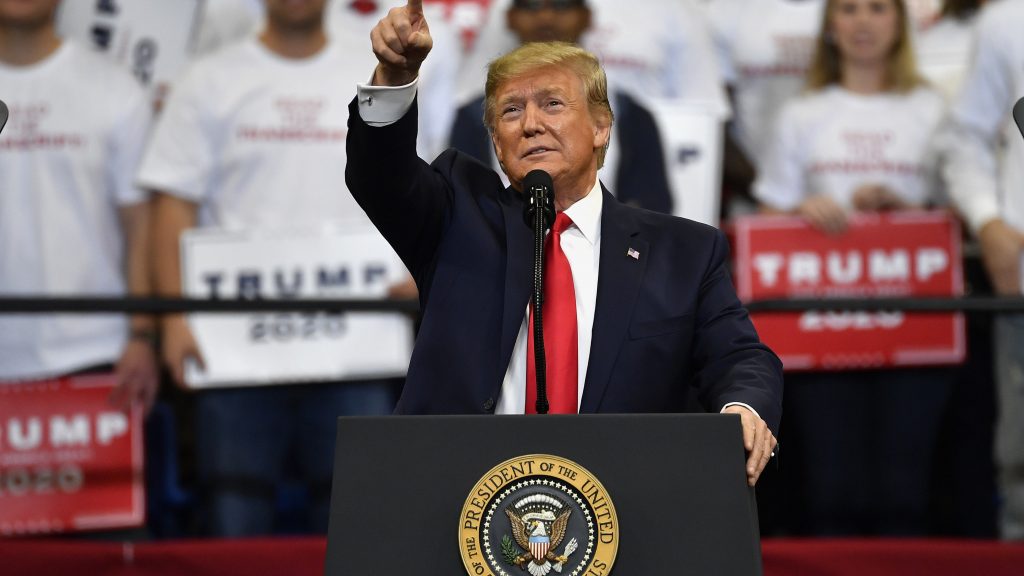 But on Monday, Trump used his Twitter feed to publicise a new book by his eldest son, Donald Trump Jr, telling his 66.5 million followers that they should “Go order it today!”

“My son, @DonaldJTrumpJr is coming out with a new book, ‘Triggered: How the Left Thrives on Hate and Wants to Silence Us’ – available tomorrow, November 5th!” Trump tweeted, calling it a “great new book that I highly recommend for ALL to read”.

Liz Hempowicz, the director of public policy at the Project on Government Oversight, a non-partisan government watchdog group, said that kind of promotional tweet would be a violation of ethics rules if it had come from any federal employee other than the president.

The tweet also highlights a well-practised tactic of Trump trying to turn a weakness into an attack on his opponents.

In this case, Trump has zeroed in on Biden’s son Hunter, going as far as to ask foreign governments, including Ukraine and China, to investigate the Biden family’s business dealings. Those efforts helped spark the impeachment inquiry into his conduct.

Biden is among the leading contenders for the Democratic nomination and could face Trump in the general election next year.

“The Biden family was PAID OFF, pure and simple!” Trump insisted in a tweet last month, despite no evidence suggesting that the former vice president received any payments or that Hunter Biden did anything illegal.

The younger Biden has acknowledged he displayed poor judgment when he took a post on the board of a Ukrainian energy firm, Burisma, after his father became the point person on US-Ukraine relations in former president Barack Obama’s administration.

Hunter Biden also recently said that he would step down from the board of directors of a Chinese-backed private equity firm because his service had become a “distraction”.

Trump is repeating the playbook he used during his 2016 campaign, when he tried to paint his then-Democratic rival Hillary Clinton as corrupt and untrustworthy, mixing legitimate criticism of her past with unfounded conspiracy theories.

Trump is the first president in modern history who has failed to divest from his business holdings. He makes frequent trips to his for-profit golf clubs, continues to collect dues at his members-only properties, and hosts fundraisers and foreign delegations at hotels that bear his family’s name.

And his sons continue to operate his company, at one point trying to launch a lower-budget hotel chain they hoped would appeal to Trump voters.

A spokesman for Trump Jr defended the tweet, insisting that there is little in common between a father promoting his son’s book and a son being paid large sums of money by foreign companies because of his last name.