The holiday’s over: Trump returns to face Iran fallout and impeachment trial - The Canary 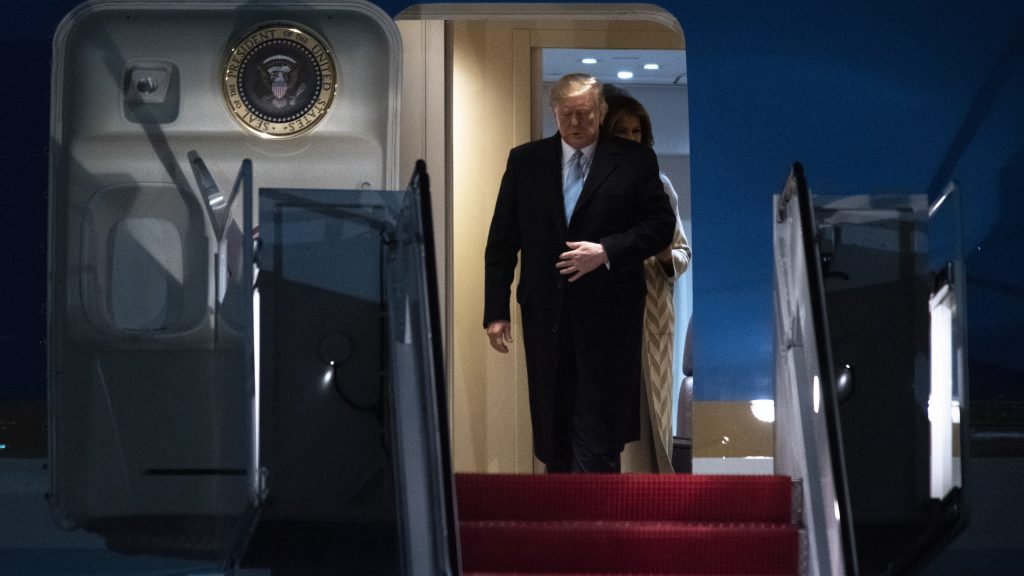 President Donald Trump has returned to the White House after his 17-day Florida holiday facing twin challenges: the fallout from the strike he ordered to kill an Iranian general and his looming impeachment trial in the Senate.

The issues will shape a defining month of Trump’s presidency, one that comes just before the first votes of the 2020 campaign are cast.

Trump is facing growing questions from Democrats fearful that the killing of Revolutionary Guard General Qassem Soleimani endangered Americans in the region and may have been an effort to distract from the president’s political crisis back home.

“Next week, the president of the United States could be facing an impeachment trial in the Senate. We know he’s deeply upset about that. And I think people are reasonably asking, ‘Why this moment?’” Elizabeth Warren, a Democrat running for president, said on CNN’s State of the Union.

“Why does he pick now to take this highly inflammatory, highly dangerous action that moves us closer to war?” the Massachusetts senator said.

In the hours before Trump’s return, tensions simmered half a world away as hundreds of thousands flooded streets in Iran on Sunday to walk alongside a casket carrying the remains of Soleimani.

It came as Iraq’s parliament voted in favour of a resolution calling for an end of the foreign military presence in their nation, an effort aimed at expelling the 5,000 US troops stationed there over the war against the Islamic State group.

Secretary of State Mike Pompeo defended the strike which killed Soleimani as part of a deterrence “strategy to convince the Iranian regime to behave like a normal nation”.

“The American people should know that we will not waver. We will be bold in protecting American interests and we will do so in a way that is consistent with the rule of law,” Pompeo told CNN.

The conflict is rooted in Trump pulling out of Iran’s atomic accord and imposing sanctions that have crippled Iran’s economy. But it was not at the forefront of Trump’s agenda when his holiday began.

Trump departed for Mar-a-Lago on 20 December, just two days after the House of Representatives voted largely on party lines to approve two articles of impeachment against him over his pressure of Ukraine to investigate a potential political foe, former vice president Joe Biden.

During his stay, the president visited his nearby golf course nearly every day and kept his public appearances to a minimum. But behind the scenes, he held a series of meetings and phone calls to prepare for what lies ahead.

Trump spoke to some of his closest Republican allies in the Senate, including Lindsey Graham of South Carolina, about the upcoming trial. Though the details of the trial remain unclear, including when it will begin, the outcome seems all but certain, as the Republican-led Senate will almost surely not remove Trump from office.

House Speaker Nancy Pelosi, a Democrat, has delayed transmitting the articles of impeachment to the upper chamber, a necessary step before the trial can begin, because she has demanded assurances from Senate Majority Leader Mitch McConnell, a Republican, that the proceedings be fair.

McConnell, who has been dismissive of the request, has begun negotiations with Senate Minority Leader Chuck Schumer of New York over the contours of the trial, including whether witnesses would be called.