Mayors want US agents blocked from Portland and other cities - Canary 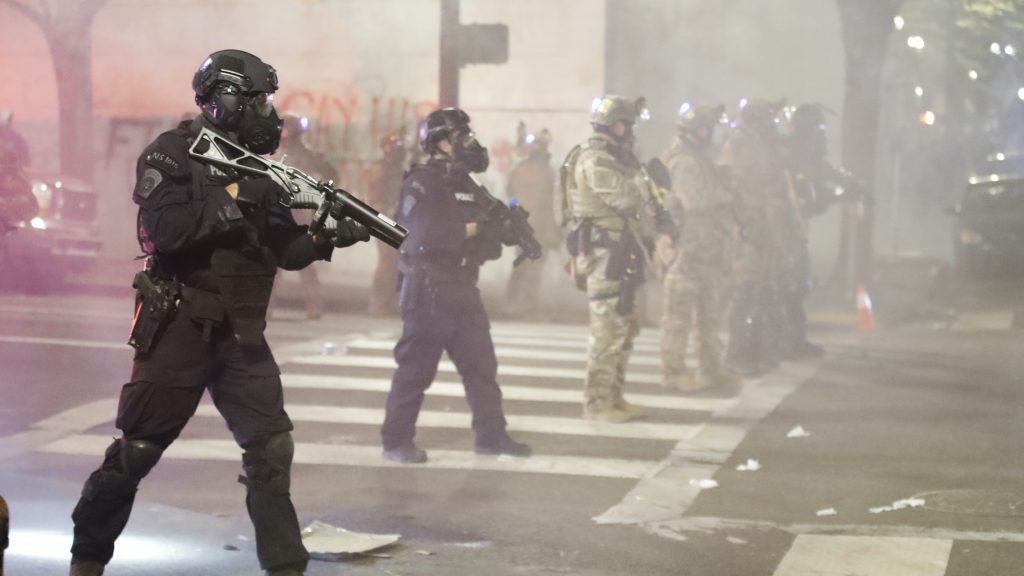 The mayors of Portland, Oregon, and five other major US cities have appealed to Congress to make it illegal for the federal government to deploy militarised agents to cities that do not want them.

“This administration’s egregious use of federal force on cities over the objections of local authorities should never happen,” the mayors of Portland, Seattle, Chicago, Kansas City, Albuquerque, New Mexico and Washington wrote to leaders of the US House and Senate.

Earlier in the day, a US official said militarised officers would remain in Portland until attacks on a federal courthouse cease – and more officers may soon be on the way.

US attorney for Oregon, Billy Williams, said: “It is not a solution to tell federal officers to leave when there continues to be attacks on federal property and personnel. We are not leaving the building unprotected to be destroyed by people intent on doing so.”

Local and state officials said the federal officers are unwelcome.

The city has had nightly protests for two months since the police killing of George Floyd in Minneapolis in May. US president Donald Trump said he sent federal agents to Portland to halt the unrest, but state and local officials said they are making the situation worse.

Trump’s deployment of the federal officers over the 4 July weekend stoked the Black Lives Matter movement. The number of nightly protesters had dwindled to less than 100 right before the deployment, and has now swelled to thousands.

Early on Monday, US agents repeatedly fired tear gas and pepper balls at protesters outside the federal courthouse in Portland. Some protesters had climbed over the fence surrounding the courthouse, while others shot fireworks, banged on the fence and projected lights on the building.

Trump said on Twitter that federal properties in Portland “wouldn’t last a day” without the presence of the federal agents.

The majority of people participating in the daily demonstrations have been peaceful. But a few have been pelting officers with objects and trying to tear down fencing protecting the Mark O Hatfield United States Courthouse.

Williams, whose office is inside the courthouse, called on peaceful protesters, community and business leaders and people of faith to not allow violence to occur in their presence and to leave the city centre before violence starts. He said federal agents have made 83 arrests.